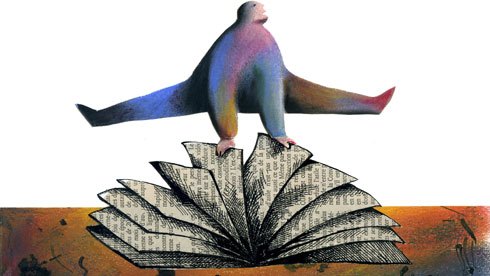 Contrary to what you might think, in Europe culture is not the preserve of the elite, but a value shared by all. However, perceptions are not the same in the west and east, writes a Belgian columnist.

How far should the boundaries of the European Union reach? "Up to where the Gothic ends," was the answer once given by a prominent European, the Christian Democrat Helmut Kohl, Chancellor of Germany from 1982 to 1998. In his answer, Kohl reflected an essentially cultural and thus European perspective. An echo of this sounded on November 16 in De Standaard, in an interview with the literary giant Cees Nooteboom, one of the best writers never to have won the Nobel Prize for Literature. Nooteboom is deeply disenchanted with the European debate as it no longer concerns culture or ideas, but is instead all about cents and percentages.

The Europe that we should be discussing, he says, is that “of Erasmus and Voltaire, of Tolstoy and Thomas Mann, of Rembrandt and Botticelli, of Hegel and Hume,” and not the Europe of “the three point zero per cent” [a reference to the EU regulation limiting a member state's government deficit to no more than 3 per cent of GDP]. A word of truth by Nooteboom, who himself embodies the Europe of culture.

What is particularly interesting about his list, however, is that all but one of the names are of western Europeans, of the Europe that uses Latin script, of the Europe of the Renaissance and the Enlightenment, of the Europe that launched the concept of tolerance, and of governments that are accountable to its citizens who are more than just subjects.

Not exactly the model that Tolstoy had in mind. If the Russia of Vladimir Putin does not fully conform to our vision of democracy, much of the reason lies in the history of Byzantine Europe, the Europe of the Cyrillic alphabet, which differs significantly from that of its neighbour to the west.

Drawing that conclusion does not constitute historical determinism, but it does mean that the western and central part of Europe feels more “at home” with the ideas and ideals of the "founding fathers" than does the Byzantine part - Greece, Romania, Bulgaria, most of the Balkans, which due to Ottoman occupation, had for centuries been denied the fruits of the Enlightenment, ie, the thoughts of Voltaire, Hegel, Hume and their descendants. [[With its expansion to the south-east of Europe, the Union has also undergone a change in identity]], the effects of which are noticeable.

Nation is a springboard to Europe

But there is another factor at play. The Europe that Nooteboom and many other true Europeans have in mind is a Europe that threatens to be branded as highly “elitist”, a word that, especially in this country [Belgium], is used at every opportunity to marginalise anyone who champions the proper use of language, an education geared to acquiring knowledge and insight, rather than just utilitarian skills. How do we plan to raise generations of Europeans without sound education in the own language and other languages?

Another man of culture, Luc Devoldere, showed himself to be a true European in his Pacification lecture in Breda on November 9. He ended his speech "Lost in all our languages," the text of which should be compulsory reading in all of the Netherlands and Flanders, with the words: "[[Perhaps I - the pragmatic language sentimentalist - will in my final moments release a sigh for my lost Gallic, mumble something in Latin, sing in Italian, dream in French, and die in my native west Flemish]]. But I will have spent my life in Dutch, watching over Dutch. Voilà.”

In other words, how despite being snugly rooted in your own language and culture, you can still become a true European. Indeed, the nation is a springboard to Europe, and not, as populist parties now proclaim, a timid retreat to the own shielded microcosm.

Joseph Goebbels, the confidant and propagandist of Hitler once said: “Whenever I hear the word culture, I reach for my revolver.” The European Union is built on the completely contradictory idea that we reach for our culture whenever we see a revolver. If we wish to raise young generations in the spirit of peace, in the spirit of Europe, then we will have to ground them in the culture that is by no means "elitist", but is part of our common heritage.