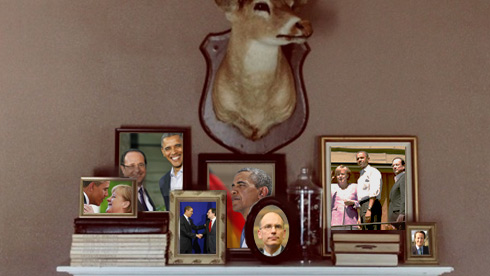 Despite the spying, we’re still family

The NSA spy scandal is a serious breach of trust between the EU and US. But a long rift would play in Vladimir Putin’s hands. That is why the EU must continue negotiating its free trade agreement and redefine its links with the US, argues a Polish columnist.

According to the German press, when the surveillance affair started to die down, the Russian president made sure that everyone in Europe found out that the Americans had been spying on Angela Merkel’s mobile telephone. When that dust had started to settle, a prominent member of Germany’s Green Party unexpectedly went to Moscow to meet [Edward] Snowden. The media went into overdrive again – and it’s clear that without the Kremlin’s permission the meeting would not have taken place.

German-Russian relations are at their worst since the fall of the Berlin Wall. Things between the US and Russia are no better either. By driving a wedge between the two allies, Moscow is scoring a major achievement, and not only in geopolitical terms. The Russian president can now show to his people how low the rotten West has sunk. This time, however, he has gone too far because no one has any doubts any more that the NSA whistleblower has become the Kremlin’s puppet. For leaders in Europe and Washington this signals a time to make amends.

The milk, however, has already been spilt because Mr Snowden wasn’t planted by the Russians in the first place. He was created by the National Security Agency, obsessed with the idea of spying on everything and everyone. Worse still, the NSA gave Mr Snowden access to its secrets, which he took advantage of before fleeing through Hong Kong to Russia. No one knows what other compromising evidence he is holding up his sleeve and how long the revelations will continue to emerge and cause embarrassment to the White House.

There’s no denying that there’s been a lot of hypocrisy in the EU’s reactions to the Snowden affair. After all, [[European intelligence agencies do not sit idly watching as the NSA hacks the Internet]], but are instead doing exactly the same and using similar means. Moreover, they coordinate their efforts and advise each other on how to circumvent the EU’s anti-surveillance laws. Besides, Europeans too – if on a smaller scale – spy on the Americans and try to steal their secrets. This is exactly what should be brought to an end.

Washington, Berlin and Paris are negotiating agreements to prevent mutual spying. But this is not enough. A general EU-US agreement is needed so that all EU citizens – not only those of the largest member states – are protected from surveillance. The White House is unlikely to negotiate the issue with smaller countries the way it is doing with France and Germany. Instead, it will probably transfer American spies from Berlin and Paris to those countries so that they continue their work.

On top of that, the EU needs tighter personal data protection regulations. Such laws were supposed to enter in force in 2014 but the deadline has been postponed by a year due, among other things, to Berlin’s pressure. That’s why Ms Merkel sounded so hollow when she was lambasting the Americans for wiretapping her phone,.

[[Guaranteeing citizens’ right to privacy doesn’t mean that Europe is surrendering in the fight against terrorism]] and wants to force America to do the same. EU intelligence agencies have the right to put suspects under surveillance, only this needs to be done within the limits of law: each case needs to be approved by the court, evidence has to be destroyed if the investigation has been discontinued, and so on.

If we are to believe Mr Snowden that a “consortium” of EU intelligence services is monitoring our emails and phone calls anyway, it’s better to set limits for its operations. And to control it more effectively than the US government did, with President Obama being unaware that the NSA listened to Chancellor Merkel’s phone conversations.

Last but not least, the surveillance scandals offers an opportunity to update what we refer to as “transatlantic ties”, a term that of late started to sound like a Cold War-era anachronism. Europe – the “new” one even more than the “old” one – expects America to help it in the case (however unlikely) of aggression from the east. US security guarantees for Nato members must not be retired. But they need to be filled with new content. Europe and American needs to find new areas to cooperate more closely. During Mr Obama’s term, the distance between the continents has grown larger.

The proposed TAFTA agreement [also known as the TTIP] offers an unprecedented chance for a US-EU rapprochement. Unfortunately, the negotiations have been overshadowed from day one by Mr Snowden’s revelations. In Europe, many are calling for the talks to be suspended or even broken off altogether. Such a scenario would be welcome news not only for Moscow but also for Beijing. That’s why European leaders need to defend the rationale behind TAFTA – even if NSA specialists have hacked their cell phones.

Barack Obama hasn’t fulfilled the hopes that were pinned on him in Europe. US intelligence agencies have treated European countries like colonies. We have good reasons to hold a grudge against America – but mustn’t stop talking to her. We’re family, after all.

"Asylum for Snowden," demands German news website Spiegel Online, saying that "those who speak the truth commit no crime".

A total of celebrities, including many political leaders from the entire political spectrum, intellectuals and sports figures are asking that Germany provide asylum to Edward Snowden, who is responsible for revealing the magnitude of spying operations carried out by the United States worldwide. Some of those revelations were published in the weekly Der Spiegel.

Snowden, who currently lives in Russian under temporary asylum until the summer of 2014, is ready to testify regarding espionage in Germany but asks that Berlin not extradite him to the United States. "The German government finds itself at a dead end," explains Der Spiegel, adding –

On the one hand the whistle-blower asks for protection on the other such an agreement would lead to discord with the United States.