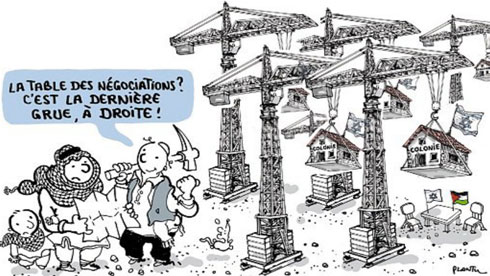 Do not focus on the colonies

In Europe, Israeli settlements are often portrayed as the greatest obstacle in Middle East peace talks, which are to resume on August 14. In the view of a Dutch historian, this is a mistaken perception arising from an overly simplistic understanding of the Israeli-Palestinian conflict.

“The negotiation table? It’s the last crane on the right!”

I would very much have liked to have heard a different response to the Jewish colonists, who are often highly criticised in Europe. On the one hand, they are indeed extremely religious, believing they are closely linked to the holy lands of Judea and Samaria [today’s West Bank]. They are also militant, which is never conducive to amiability. For ideological reasons, they are also keen on raising large families. On the other hand, by any human standards, their achievements, including economic ones, are considerable, without them being able to count on much sympathy their own country. A lot of Israelis believe the settlers are more trouble than they are worth, due to their religious zeal and related privileges. Incidentally, the settlements are also home to large numbers of “ordinary” Jewish immigrants attracted by the lower house prices.

In Europe, the Israeli policy on settlements is regarded as the greatest obstacle to peace in the Middle East. [[The settlers, with their eccentric behaviour, make for easy scapegoats]]. However, before 1967 and the creation of Israeli-occupied areas inhabited by Jewish settlers, there was no peace in the Holy Land either. There certainly was no Palestinian state on Arab soil. Now, as we witness the degeneration of the Arab Spring and the civil war in Syria, no one in his right mind can claim that Israeli settlement policy is the biggest problem facing the Middle East.

One certain thing is that it is becoming increasingly difficult for the Palestinians to establish their own state the longer the Israeli occupation of the West Bank lasts. That is creating a new reality on the ground. However, this is partly their own fault for having rejected far-reaching territory-sharing proposals in the past and for always demanding their pound of flesh. In other words a repatriation scheme for millions of “refugees” (comprising at most 600,000 Palestinians who fled the area allocated to Israel by the UN), and East Jerusalem as the capital of a future Palestinian state. Those requirements are contrary to both the historical and the political reality.

Why would Israel accept a return to 1967 borders, which did not bring peace even then? When in 2005, Israel under Ariel Sharon proceeded to evacuate the Gaza Strip, including the settlements, the Jewish state was faced with a rocket-firing Hamas administration (which also divided the Palestinian camp). These are facts that cannot simply be hidden under the negotiating table. However, Europe appears to be obsessed with the uncompromising religious zeal of the Jewish settlers.

It is clear that the Jewish and Christian interpretations of biblical Israel [as are prevalent in the Netherlands] create complications, particularly when it comes to relations with the Muslim world. Non-believers tend to not think about it, but this is tantamount to ignoring a key “reality”of the Holy Land. Anyone who wants to achieve peace in the Middle East must be fully conversant with the views of all parties. Oddly enough, many in Europe consider it completely normal that the holy city of Mecca is only accessible to Muslims, but that there should be an international plan to divide Jerusalem.

Nevertheless, it is clear that such an approach would only generate new problems and that the city is better off under Israeli control. Because this is something everyone senses (but avoids saying out loud), the Jewish settlements are seized on as the primary obstacle to peace. As if peace with the Muslim world would suddenly be achieved if the settlements went. As if the Palestinians would then be capable of proper self-rule without Hamas and suicide squads. As if Jews (and Christians) have no interest in the West Bank (to modern Europeans this is Muslim territory), despite this being home to their holy places.

Israel, on the other hand, is expected to withdraw to the border lines drawn in 1967. As if the numerous new wars waged in the Middle East since then have never occurred. Shouldn’t Israel have developed the occupied territories back then? Would the Palestinians, who, contrary from suffering genocide, actually witnessed a dramatic increase in population, have been better off that way? [[Is the building of houses more objectionable than firing rockets?]]

The world has also changed dramatically since 1967. Throughout the entire 20th century, Jews and Christians were systematically driven out of the Muslim world, as they have been since the decline of the Ottoman Empire. However, these are developments to which we modern non-believers prefer to shut our eyes, for the sake of peace and quiet and our own peace of mind, or because we do not know any better and are ignorant of how complicated the Middle East really is.

However, this could also be the time for “A New European Voice”, one in which we face up to Israel’s security dilemmas and the chances of survival, for example, of Christians who are under threat in the Middle East. We should remember Muslims were not the only ones to call it home in times gone by.

On the eve of peace talks between Palestinian and Israeli authorities, scheduled to resume on August 14 in Jerusalem, French daily Le Monde reports that Michael Mann, a spokesman for the European Union diplomacy chief Catherine Ashton, has called on both parties to “to refrain from actions which could undermine the negotiation process and the prospects of peace”.

Mann was referring to “the the Israeli government’s announcement of a call for tenders for the construction of close to 1,200 new dwellings in East Jerusalem and Israeli colonies in the West Bank”, explains another French daily, Le Figaro. Emphasising that the West Bank colonies are “illegal under international law”, Mann added they “threaten to make a two-state solution to the Israeli-Palestinian conflict impossible."

In its editorial, Le Figaro welcomes what it describes as an opportunity “to play a peace card”, and to counter —

… the growing threat of [Israeli] isolation, which has been highlighted by European sanctions against products from West Bank colonies.
On July 17, the Commission excluded the Occupied Territories from cooperataion agreements between the EU and Israel. The move will effectively mean that Israeli colonies in the West Bank will be unable to benefit from new economic cooperation projects launched by the EU or its member states.