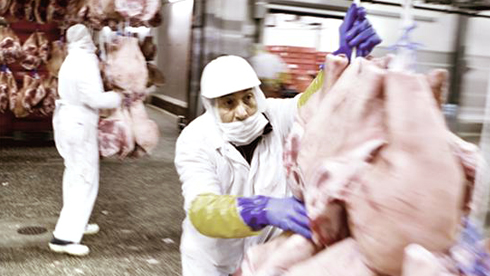 In Lower Saxony, in the “fat belt” of Germany, working conditions in the meat industry illustrate the less than shiny side of the success of the country. At the centre of the debate is whether to bring in a minimum wage: a long standing Social Democratic Party demand, which is now being discussed by Angela Merkel’s CDU.

The reason that induced Stefan Petrut to leave Romania to come to work in Germany was simple: “Money”. The thick-set man with a compact build, who shows little sign of having worked for 30 years on the meat-cutting chain in slaughterhouses, makes no secret of it. Money was seriously short in Buzau, his hometown 100 km from Bucharest.
Then, in 2008, his friend Nicolai told him about slaughterhouse work in Lower Saxony, in Essen-Oldenburg, which paid 1,600 euros a month. “I said yes, I’ll be there”. A few days later, Stefan, forty-six years old at the time, left behind a grown son but took along his wife, Luminata, a seamstress. She left behind her needle work to become a meat cutter. From four o’clock in the afternoon until two o'clock in the morning, breaks included. It was a nice change of fortune.
At the beginning, everything went well – apart from the bare apartment in a brick house in Quakenbrück, ten kilometres from the slaughterhouse, where Stefan and Luminata lived with two other couples. A single bathroom. A toilet shared by all of them. And all this for 175 euros a month per person, paid to the “patron”. The same man who ran the slaughterhouse.

After a few months, though, the company changed the system. In place of a fixed salary, Stefan and his wife were now paid by the piece: 1.31 cents (€0.0131) per pig cut by him, 0.98 cents to her. Solid and used to the exercise, Stefan could handle 700 animals per hour, which brought his wage up to a little over €9 an hour. But Luminata did not have the same tempo. Worse, after a few days the pigs stopped arriving. Danish Crown, a large meat packer that bought the cuts from the slaughterhouse where Stefan worked, was looking for a cheaper subcontractor.
“The more pigs, the more money”, sums up Stefan in the French he learned at school. After the change, he and his wife had to get by on just €500 per month. Then, nothing: the slaughterhouse went bankrupt. They were let go without the more-than € 5,000 that they are still owed.

In Lower Saxony, the case of these Romanians is just one example of the exploitation of foreign workers, who have little awareness of their rights and are often kept deliberately in the dark. For a year now the local press has been echoing more or less sordid stories from the “fat belt” of Germany, the European meat-export champion.

Over the years, the “invited” nationalities have moved on, but the scenario remains the same: a miserable wage that sometimes verges on two to three euros per hour and indecent housing conditions. “A few weeks ago I was contacted by a Spaniard working in a poultry abattoir who had not been paid. I found out that he and 70 other Spaniards were living in 180 square metres of space in a disused restaurant”, says Matthias Brümmer, regional manager of the NGG food workers’ union.

Unemployment “as low as the daisies”

“There are no Greeks around any more. But the industry always looks for what it wants where poverty is the greatest,” he says in disgust. “[[These industrialists like to boast that they treat animals properly, but they treat their employees like beasts of the field]].”

In Germany, there is no minimum wage in the meat sector. In addition, under the government of Gerhard Schröder (SPD), a clause was introduced allowing a German employer to “rent” the workforce of a foreign firm – Romanian or Bulgarian, for example. Within this framework, employees are subject to the labour laws of their country of origin, which is often the lowest bidder. By allowing manufacturers to use cheap labour, Lower Saxony has become a magnet to the meat-packing multinationals. Danish Crown, the Dutch firm of Vion have all moved in on the action, joining the German firms of Tönnies, Westfleisch and others.

The result is that, in this agricultural region, unemployment is “as low as the daisies” (6.5 per cent in August according to the employment agency), and despite automation, the industry still employs 142,000 workers – or more than 200,000 when counting these “rented” workers, says Mr. Brummer. “If Germany were to stop producing meat today, Europe would be hit by famine!”, he jokes.

For him and for many Germans, this result is in no way a glowing success. “I’m ashamed. When I travel abroad and I get asked about this subject, I can’t justify it,” says Alexander Herzog-Stein, a specialist in the employment market with the IMK Institute, which is close to the unions…. After the meat industry, the fight will be on for workers in hotels, in the catering business, and for boys who work as hairdressers, whose salaries, he says, are around €2 to €3 per hour.