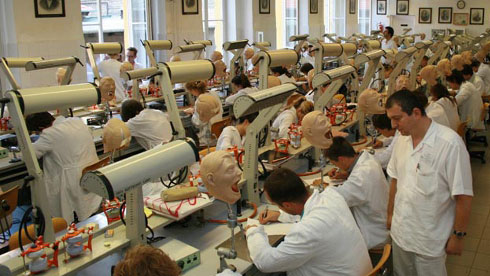 Lower tuition costs, greater accessibility and English-language classes are leading growing numbers of foreign students to enrol in eastern European medical schools. And with EU-recognised diplomas and fluid national borders, they feel confident they can find work in Europe.

When a first-year medical student from the United States left his skateboard by the entrance of a 19th-Century lecture hall here, Professor Andrea Dorottya Szekely swiftly picked it up and reprimanded its young owner.

“We do things differently here,” Dr Szekely said of Semmelweis University, a 244-year-old institution in Budapest that focuses on the medical and health sciences. Students are expected to stand at attention in classrooms until a bell rings and their professors enter, for example.

Despite having to bridge such cultural gaps at times, an increasing number of foreign students are heading to eastern Europe for medical, dental or pharmaceutical studies. Though it still hosts far fewer international students than western Europe does, the region appears to be attracting growing interest.

You can unsubscribe at anytime *
Categories
EducationSocietyHungaryPolandEuropean Union