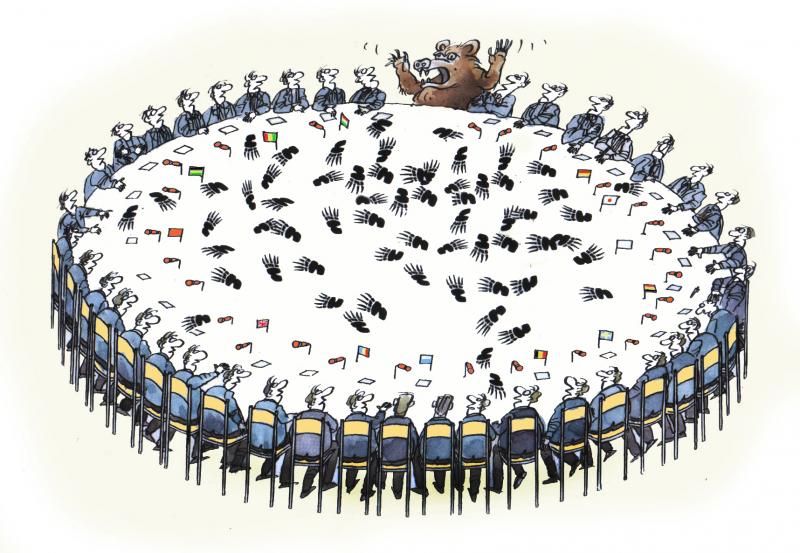 Eastern Partnership: A relationship in the shadow of Moscow

More than ten years after its launch, the Eastern Partnership is still unknown to most people and a victim of an essentially Russocentric vision in Western Europe. Meanwhile, the lack of progress in the six Partnership countries is fuelling resentment, creating instability and tickling populist impulses.

The EU’s Eastern Partnership (EaP) policy is a bit like a Rorschach inkblot. Depending on who observes it, it radically changes shape and meaning. Seen from Warsaw or Vilnius, it is a project of great economic, strategic and civil importance; for the Italians, French, Dutch and many other Western European countries, it is only a vague programme whose outlines are unknown and its aims are not well understood.

Little is said about the Eastern Partnership in the media, and when it is done, it is above all from a strictly national point of view, never a European one. Indeed, it is very likely that even political leaders are not very familiar with the EaP framework.

A similar argument can be made for the countries involved in the partnership. By geographical contiguity or the commonality of historical experiences, the states of Central and Eastern Europe are well acquainted with the events in Belarus, Ukraine, Moldova, Georgia, Armenia and Azerbaijan.

On the contrary, in Western Europe, there is often a patchy knowledge about former Soviet states, projected into an indefinite geographical and political space dominated by Russia or directly confused with Russia, its borders and interests.

Therefore, most Western European countries believe that matters relating to members of the Eastern Partnership are to be agreed with Moscow rather than with local governments, not to mention the partnership itself.

This attitude has become even more evident with the recent crises in Nagorno-Karabakh and Belarus, where EU countries have hardly ever mentioned the Eastern Partnership as a possible vehicle for hosting crisis-solving talks – even if formally it would be, it was up to the Minsk group to do it – and they let Russia take care of it (and take the political credit for it).

The reasons for this Russia-centred view are different. In Italy, some are the children of old conditioned reflexes, such as the tendency to press all that is Eastern Europe onto Russia and to identify the latter with the eternal imperial ghost of the Soviet Union.

Others are more recent, such as the widespread anti-American and anti-capitalist resentment, which leads some to consider Putin’s Russia – in reality, a brutal system of oligarchic state capitalism – as a possible alternative model to the Western liberal-democratic one.

Added to this are the longings of a Russian bulwark of traditionalism and Christian identity cultivated by the most conservative strata on the right side of the political spectrum. The result is the inclination to justify every action of Moscow and to consider its right to exert influence on Eastern Europe and the former Soviet space as natural and immutable.

It is difficult to say whether this pro-Russian prejudice is prevalent in Italian and Western European society in general. It is undoubtedly adequately represented across the political spectrum, with particular intensity on the far right and partly on the radical left. It is also evident in several leading political forces or those who have had government responsibilities (The League, Brothers of Italy and the Five Star Movement in Italy) or the opposition (Unsubmissive France and National Rally in France).

“For many Western EU Member States, the Eastern Partnership is little more than an empty shell,” explains a diplomatic source in Brussels: “It is arguably a vehicle for providing financial support to those countries, but certainly not a political tool. Nobody here believes it to be a global entity, unlike the African Union or ASEAN.”

Furthermore, the Eastern Partnership countries do not show much solidarity or coordination among themselves; they “do not form a coherent bloc with which the EU can build a stable relationship among equals”.

At the EU level, “most Western countries do not follow the situation in the EaP countries consistently”, says another diplomatic source from within the institutions: “They are only interested in Ukraine or Belarus, and they diverge regarding the attitude towards Moscow. Poland and the Baltics are more likely to have a strong position towards the Kremlin, while France and Germany show a softer one. In this situation, it is difficult for the Union to have a univocal position.”

Things could change in the coming months when German Chancellor Angela Merkel leaves office. Having grown up in the former German Democratic Republic, Merkel is fluent in Russian and understands the Soviet and post-Soviet mentality – something that has been quite helpful in maintaining an open line with Moscow.

The recent visit to Moscow by EU diplomacy chief Josep Borrell is emblematic of the consequences of this lack of a clear conversation line and a European policy based on reaction rather than initiative. Only after Borrell suffered diplomatic humiliation before the eyes of the world, the EU decided to strengthen sanctions against personalities close to the Kremlin and, above all, to impose restrictive measures under the new tools adopted at the beginning of December 2020.

The EU’s so-called ‘Magnitsky Act’ targets people responsible for human rights violations and was used for the first time to sanction Russian agents accountable for the arrest, conviction and persecution of Russian opposition leader Alexei Navalny.

All this obviously generates at least a distorted view of what is happening in Central and Eastern Europe and does not help to raise interest in the countries of the Eastern Partnership. The EaP – it must be said – in its first ten years of existence certainly did not succeed in achieving its primary objective, which is to guarantee “stability, security and prosperity” to the countries involved.

In fact, while there have been successes, especially from an economic point of view, the overall situation remains not very encouraging: in Belarus, the protests that have been going on since August have brought out the more ferocious side of the regime, and in Azerbaijan, the system remains firmly autocratic and even belligerent.

Where progress on democratisation and governance has been made (in Georgia, Ukraine and Moldova, for example), they are still quite fragile, threatened by political instability and hard-to-undermine established interests.

In this regard, it must also be said that the retreat of democracy is not exclusive to the Eastern Partnership countries: it can be clearly observed within the European Union itself (especially in Poland and Hungary) and in the Balkan countries that are official candidates for membership (with Serbia in the lead).

An accelerator of political and social transformations in the region could be the offer of a genuine European integration prospect. Still, this step would be a significant hurdle to take.

Moreover, the moment does not seem at all opportune, with the Union going through tensions with its most rebellious members (always Budapest and Warsaw) and the enlargement to South-eastern Europe proceeding slowly and amidst a thousand resistances.

The European public opinion does not seem ready, and even among European leaders, there is little desire to open new negotiations.

Finally, the Eastern Partnership states themselves do not seem to be in a hurry to take the risk of a confrontation with Moscow, for which any move of its former satellites towards the EU is considered a threat.

To protect itself from these possible risks, Moscow has provoked or exploited ‘frozen’ conflicts in four of the six countries of the Partnership (Georgia, Ukraine and now Armenia and Azerbaijan), thus guaranteeing itself a central role whatever the direction they want to take.

Where is the Union’s great transformative force?

The stalemate in the Eastern Partnership countries, however, only feeds resentment, especially among the younger and more dynamic sections of the population, instability and risks of anti-democratic and populist impulses.

There is one more element that must be considered. Given the situation in the Balkans, it is not even certain that the mirage of joining the Union really has that great ‘transformative force’ that is often attributed to it.

In this situation, Europe’s weakness in the former Soviet space is well exemplified by the more than marginal role that Brussels played in the mediation to put an end to the recent conflict in Nagorno Karabakh.

Suppose it is true that Europe has never played a leading role in the Caucasus, not even in the nineties’ conflicts. In that case, the current approach to the region appears to have the defect of neglecting an overall vision of the ongoing dynamics (military, security, linked to identity, purely political) between and within individual states.

On the other hand, any strengthening of the European role in the space of the six EaP countries would be considered a hostile manoeuvre on the part of Moscow, which for years has had an increasingly assertive attitude, and would trigger new problems and new clashes. The issue is very delicate, as we learned from the Ukrainian events of 2014.

Therefore, each move must be studied and implemented with particular attention not to irritate the Kremlin: the EU must try to exert influence and attraction, avoiding any possible provocation and never giving the impression of wanting to evoke political upheavals.

The gap between the attitude towards the Eastern Partnership in the Western EU Member States, Scandinavian states and former socialist countries came to light again when 13 member states (including ten former socialist countries) wrote a letter to the European Commission, asking her to pay the countries of the Eastern Partnership “similar attention” to that granted to candidates for EU membership in supporting the vaccination campaign against COVID-19.

This ‘vaccine diplomacy’ has received significantly little attention from the larger (and Western) EU Member States, which do not seem to share with their Central European partners the awareness of how important it is for the Union to be perceived by external countries as a power to whom you can turn in emergencies, as an alternative to the apparently benevolent but never disinterested Russian neighbour.

Thus, Russia has once again been able to cash in on political and diplomatic profits with minimal effort, thanks to the EU’s lack of initiative, understanding and action.

At this point, the preferable solution appears to be a sort of middle ground between two of the four scenarios that a recent report by Visegrad Insight has described regarding the future of the Eastern Partnership.

In a nutshell: a process of autonomous civil emancipation in the EaP countries, capable of setting in motion virtuous changes in the entire public sphere through an awakening of the collective conscience and civic commitment.

However, this does not take place before the eyes of a distracted West and a disinterested EU, but instead with the active support of EU institutions and some individual European Member States. That support goes hand in hand with more intense and fruitful cooperation with Europe.

In practice, this means greater political attention and a renewed approach to the objectives and tools of the Eastern Partnership. But above all, investments and concrete aid to civil society organisations and movements fighting for democracy, protecting minority rights and the rule of law.

The article on Visegrad Insight.