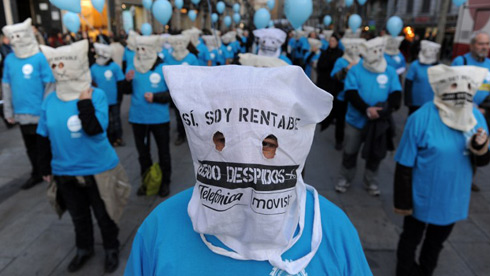 The prime minister's annual state of the nation speech on February 20, coincides with one of the country's worst economic, social and institutional crises, which has left no one unscathed. Rotten with corruption, the political system is threatening to implode, putting an end to Spanish democracy.

“Yes, I am profitable. 6,500 layoffs.” Telefónica employees in Barcelona protest against layoffs announced by the operator

Although there is no link between them, the various pressures weighing on politicians and institutions could result in the paralysis of the political system and an institutional breakdown that will mark the end of the current democratic model.

Virtually everywhere you look, on every level of the state, it is hard to find a public figure who is not facing some kind of coercive pressure. And no political party can say that it is not in danger.

Businessman Diego Torres has continued to haul his former partner, the king’s son-in-law, Iñaki Urdangarin, over the coals to the point where he has now implicated Infanta Cristina, the younger daughter of King Juan Carlos, and mounted increasingly virulent attacks on the royal family. Diego Torres’ most recent court appearance was even more spectacular because the king himself and even Prince Felipe intervened.

In the ranks of the government, the situation is no brighter. Mariano Rajoy, who has the dual role of PP and government leader, has offered no explanation to justify why Luís Bárcenas continued as People's Party (PP) treasurer for more than two years following his resignation from the Senate, and revelations of his involvement in the Gürtel case [an inquiry into corruption in which officials from the PP are implicated].

No one knows, nor can anyone explain, why someone who was involved with the PP’s finances for more than 20 years, and who had €22m in a Swiss bank account, should have benefited from such leniency.

Every day the people of Spain open their newspapers and surf the web to read up on yet another episode in the saga of how these criminals transformed their country into a vast quagmire of corruption. The topic is omnipresent in offices, factories and bars — so much so that the level of civic indignation is unprecedented.

In Catalonia, the political stability of the region is looking increasingly shaky as revelations emerge that detective agencies have been probing the professional activities and personal lives of prominent politicians. Dirt-digging and blackmail seems to have been the motivation for these contracts. In the weeks to come, some of the politicians most heavily involved in the push for Catalan independence could be arraigned for corruption.

It would be hard to find a constellation that could link up quite as many stars from the Spanish state. The outrage is growing day by day and gathering speed on social networks, and the movements of outraged citizens have begun to win their first victories against the parliament and the decisions of the majority parties.

If this pattern is not broken, if the King’s daughter Cristina is called to testify in the corruption charges against her husband, the Duke of Palma de Mallorca, and if senior leaders of the PP, including Mariano Rajoy, are hauled into the courts, the stability of the government itself could be undermined.

Unwilling to forgive or forget

Meanwhile, the series of extortions are provoking no reaction. Luis Bárcenas is managing his timetable and his documents efficiently. So far, he has managed it very well: Mariano Rajoy, far from initiating legal proceedings against him, dare not even speak his name.

To submit to blackmail can only draw out or worsen a weakness; better to let it all air. If the blackmailer’s demands are pegged too high, euthanasia is preferable to prolonging the suffering of the sick.

And to this catastrophic panorama we must add the systemic crisis hitting the Spanish Confederation of Business (CEOE). Its former president, Gerardo Diaz Ferran, is in prison for forging a mortgage. His successor, Joan Rossell, has been throwing fuel on the fire by questioning the official unemployment figures provided by the government and has also insulted and offended hundreds of thousands of civil servants. And the vice-president of the organisation, Arturo Fernández, who has been accused of wriggling out of paying social security contribution and taxes by making off-the-book payments to employees, will be forced to resign as soon as the fraud trial gets going.

On the same theme of illness, the continual health problems afflicting the king, his advancing age and the essential obligations related to his role are other factors burdening a hereditary institution that is not strongly enough established in the hearts of the Spaniards to avoid a delicate succession.

Everything depends on the structure of the state. If that collapses, it will be difficult to salvage the pillars that hold it up. However, the risk of destabilisation cannot and should not prevent the truth from being revealed. This time around, the people are not willing to forgive or to forget.

Voters held to ransom by system

Spanish legal philosopher Jorge Urdánoz Ganuza has no doubts about the cause of the corruption which has struck Spain’s political class: it is the two-party system, in which the conservative People’s Party (PP) and the Spanish Socialist Worker’s Party (PSOE) continue to dominate without any real competition, he writes in El País. It follows that —

millions of Spaniards who live in small electoral districts are offered only two options: either to vote for the PP even though its list includes corrupt representatives, or to allow the PSOE to win the day. Or vice-versa: either you vote PSOE, whether you want to or not, or you will be allowing the PP to win. […] As it stands, the PP can go ahead as they are, because they know that at the next election, millions of voters “will have no other choice” but to select either them or the PSOE.

The political crisis “has eclipsed the economic crisis, […] delaying the implementation of appropriate treatment and making the situation worse,” notes La Vanguardia. The daily continues —

this political crisis has ushered in a crisis in the rule of law with two extremely serious consequences: firstly, laws and court decisions are not being properly applied, and secondly, as a result of their growing loss of credibility, state institutions are increasingly ineffective.