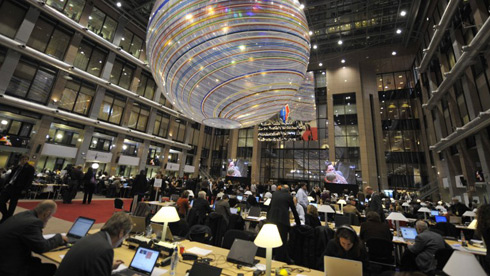 Embedded in the Brussels bubble

The Belgian capital is the heart of the EU power machine, where dozens of journalists try to cover the activities of all the institutions. But as an Australian newcomer founds out, they have too much information and too little time to make sense of what’s going on.

Every day for the past couple of months I have been parking my computer in the press area of the European Commission – literally a few steps away from the large press conference room. I’m surrounded by a multinational (and multilingual) army of casual reporters, taking advantage of the free wifi and what appears to be subsidised coffee (€0.90 a cup – how is that possible?).

While the capital-C correspondents working for the big mastheads are around the corner at the International Press Centre or the Residential Palace, us freelancers are squeezing into the nooks and crannies of a crowded media landscape.

Being the only Australian around and having no obvious affinity with the other anglophones, I have been adopted by a group of Italians, who promptly informed me that my human rights were being violated every time I ate at the Commission’s canteen (the European Council across the road is much better).

They’re an interesting bunch of people: smart, articulate, speaking good English and mainly in their early thirties. One of them has carved out a niche by filing for a small wire service and an aviation magazine; another has been employed locally by the Brussels bureau of an Italian cable news TV station; another files for an agricultural newsletter. They are all going from contract to contract, sometimes even from job to job, and they’re always on the lookout for more.

I’m also introduced to the “father” of the Italian press corps: a distinguished gentleman whose business card reads like a tautology: collaboratore fisso (“permanent stringer”). His newspaper in Italy did not want to pay for him to stay in Brussels, but instead agreed to buy a certain number of his stories every week and put him on a type of retainer. And he’s not alone: Italy’s second-largest newspaper, La Repubblica, recently replaced its retiring Brussels correspondent with… himself – that is, they told him he could stay in the position, but as a casual with an exclusive contract.

The paper’s Brussels bureau is now made up of a retired correspondent supplementing his superannuation by doing the same job he was doing before.

It’s not the glamorous life you would associate with journalism in the most important city of Europe. Over the course of a day I overhear one journalist on the phone demanding to know what kind of lunch would be served (free of charge) at a conference he was thinking of covering. “When you say sandwiches – what kind of sandwiches?” he asks. A bit later someone is locked in a tug-of-war with his newspaper, which wants him to attend an annual meeting in his home country but won’t pay the airfare. The head office eventually relents, but the journalist will have to take a Ryan Air flight out of Charleroi (the town, an hour’s drive south of Brussels, that everyone loves to hate). The journalist grumbles about it for the rest of the day.

How this casualisation is affecting the reporting of European news is hard to say, given that many European freelancers sitting alongside me as I write this have never known anything else. They work frantically – rushing from the midday press conference then typing madly for the next hour. They rarely travel and will readily admit that they don’t have much time for research – they are there to gather the hassle-free news which the European Union offers them every day.

And if straightforward news is your game, work here at the European Union can be easy.

Every day the pigeonholes outside the European Commission’s press conference room fill up with media releases announcing important and expensive policy decisions. More often than not you’ll get the mobile phone numbers of highly articulate (and multilingual) advisers to offer background or on-the-record quotes. You can attend “technical briefings” and, if you play your cards right, you can secure an interview with a commissioner.

For the electronic media there are two online channels covering all EU events (in Luxembourg, Brussels and Strasbourg) and more video-on-demand than you could poke a memory stick at. Studios and technicians are made available, free of charge: if you want to record a TV interview with a member of the European Parliament, just call the guys down in audiovisual bookings.

One day I picked up all the pieces of official communication I could find: fifteen items. An announcement by the commissioner for regional policy on competition and state aid; a European parliamentary committee looking into the Common European Sales Law; an announcement by vice-president Catherine Ashton about the elections in Ukraine; the Commission approving the merger of two telecommunications companies… Meanwhile, my email inbox was filling up with email alerts from EU bodies I hadn’t known existed.

The centrepiece of the European Union’s news-generating system is the Commission’s daily, midday press conference, which can usually be relied on to provide no new information. In fact, more often than not the Commission’s spokeswoman Pia Ahrenkilde Hansen (a multilingual version of C.J., for fans of The West Wing) simply reiterates what has been announced in the media releases. I begin to suspect that reporters are showing up simply to find a way into a story – to get a sense from the questions of other journalists of where they might find a hook.

My fellow inductees joke that they have already learnt the most important rule for a journalist working out of Brussels: spend the last ten minutes of your day deleting emails you have received from the European Union. You don’t want to take that stuff home with you and a cathartic ritual can be empowering. But on the broader issue of how to manage our relationship with the institution we’ll be covering, we are offered no advice.

We’re here right at a turning point in the history of Europe – and the world. Over coming years the European Union will either start to unravel or its core members will embrace the pioneering spirit of the grouping’s founders and drive for greater unity – even a fully fledged federation.

It’s all happening at a snail’s pace, but when our reports over the next five years are summed up, we will have chronicled something huge. It could be the best work of our careers.

But will we be up to the challenge? Will we manage to rise above the daily fog of press releases, quotable quotes and petty bickering to make sense of the times we are living in? Or does our vantage point in the basement of the Commission make us too close to the action – too compromised by the mechanics of policy announcements – to ever make sense of what’s going on?

Other parts of the series:

El País: delusions of grandeur
Still pandering to the power brokers
Newspapers will not die in Silicon Valley
Culture is becoming a luxury