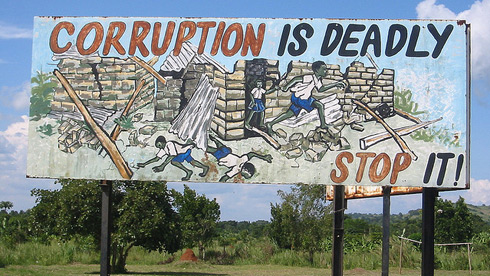 EU money only benefits the corrupt

According to the European Court of Auditors, it’s almost impossible to check how EU aid money is spent by developing countries. As a major EU aid fraud scandal hits Uganda, commentators in Kampala wonder why European donors continue to funnel cash into a corrupt country.

Futureatlas  | Ugandan billboard warning people of the dangers of corruption

Timothy Kalyegira has a simple piece of advice for his government: steal as much aid money as possible. If European countries “have nothing better to do with their taxpayers' money than give it to a government with a proven track record of corruption,” then it is “only logical” that corrupt government officials will spend the money on houses and expensive cars.

Timothy Kalyegira is a well-known political commentator in Uganda. He regularly voices his opinion in the independent newspaper Daily Monitor. Kalyegira's sarcastic comment is a reaction to one of the larger scandals concerning aid in his country.

The European Union, Great Britain, Ireland, Denmark, Norway and Germany have suspended €225 million in aid to Uganda. Donor countries are responding to the theft of at least €10 million that was intended for northern Uganda, an area that is recovering from armed conflict. They demand that those funds are recovered before they resume their aid programme.

Citizens sleeping on the streets

Commentators, journalists and newspaper readers in Uganda have retorted with scorn, ridicule and disbelief. Of course, primary responsibility lies with the Ugandan government officials who have pocketed the money, but are the European countries not also partly to blame? They continue giving to a government that has, all too often, proven its inclination to steal donor funds. “Somehow, though,” says Kalyegira, the European governments plagued by recession would “rather see their own citizens sleep on the streets and starting to get their meals from soup kitchens,” than see Africans get by without western aid.

The funds stolen in Uganda were intended as budget support, money transferred directly to a government. The underlying idea is that the recipient countries are best able to determine where the aid is required. What's more, budget support creates political leverage - at least in theory. Uganda was in the 1990s the first country to receive budget support from the World Bank. President Yoweri Museveni was thus rewarded for his macro-economic stabilisation policy. In the meantime, Museveni has ruled the country for 27 years and fraud scandals have become the order of the day.

The fact that budget support does not always have the desired effect was confirmed on Tuesday when Karel Pinxten, speaking on behalf of the European Court of Auditors, further commented on the €1.6nm that the EU committed last year to aid of this type. "Once the money is transferred, it is lost from sight," said Pinxten. "That's a risk that we no longer want to take."

Few Ugandans put great faith in those words. After all, donors continued with budget support despite funds being stolen from the Community of Nations and the Global Fund, an organisation that fights Aids, TB and malaria.

"So we can be sure that it won’t be long before we hear of western aid now restored," says Kalyegira. “As soon as the donor aid comes in, it will be back to buying luxury cars for Ugandan ministers, taking their wives and mistresses on shopping sprees to the West and building more arcades in Kampala." That explains the brazen advice to steal the money: if donors don't want to listen, then they will have to feel the consequences.

Joachim Buwembo, another commentator, wrote that he was happy with Uganda's thieving government. For if it continues these practices until the West has no other option but to definitely stop giving development aid, an end will come to the “neo-colonial” relationship of dependency. An extra benefit, wrote Buwembo, is that it may lead to a reduction in corruption. Simply because there is less to steal.

Representatives from northern Uganda, for which the stolen funds were intended, do not want the aid to end outright. They, unlike the newspaper commentators in Kampala, do benefit from the money, at least in theory. But they have no objections to suspending the aid until the thieves have been prosecuted.