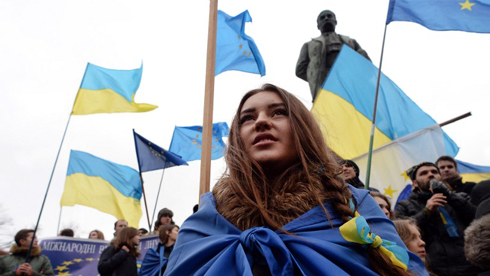 Europe must support the demonstrators

In the wake of the Summit on the Eastern Partnership held in Vilnius, hundreds of thousands of Ukrainians are expressing their commitment to Europe across the nation. The EU must now step forward and embody the ideal of freedom, demands Le Monde.

Pro-European demonstration in Kiev on November 26 2013

Demonstrations of love for the European Union are sufficiently rare these days for them to be rather arresting. Absorbed by the debt crisis, the struggle for more growth and lower unemployment, the rise of populism and the management of its enlargement, the union has forgotten that it retains a formidable power of attraction. For people who do not benefit from the rule of law, Europe symbolises the hope for freedom, democracy, and modernity.

This is the message sent to us by tens of thousands of Ukrainians who have been gathering day after day to protest on the squares of Kiev and the other cities of the country. The anger of the pro-European Ukrainians has grown ever since their President, Viktor Yanukovych, abruptly broke off negotiations for the association agreement with the EU on November 21, a week before it was to be signed.

The government in Kiev has made no secret of the role played by Russia in this abrupt turnabout: on Sunday the prime minister announced that Mr Yanukovych would be leaving for Moscow in the coming days to discuss there a “roadmap for cooperation”. The mass rallies in Kiev and the western Ukraine, as well as the absence of demonstrations of support for the president in the eastern, Russian-speaking of the country, show that for a good many Ukrainians the EU is the partner the country should be cooperating with, and not the great neighbour to the east.

[On December 1], however, in “Europe Square”, in Kiev, the starry EU flags were lowered for the blue and yellow flag of the Ukraine. The European claim has been the catalyst for a more profound movement in favour of regime change. The “Orange Revolution” of 2004 was an unfinished revolution, which left the Ukraine stuck halfway: the state, pseudo-democratic, was soon given over to systemic corruption and the economy was left not restructured and inexorably collapsed. [[The demonstrators of 2013 want reforms and a clean and democratic state. A European state]].

What can the EU do? Neither rescue the Ukrainian economy nor overthrow the government. But it must, of course, stick to its agreed offer of association. It must also, in statements from leaders in Brussels and the large member states, blind for too long to what is at stake in the struggle for Kiev, let know loudly and clearly that it supports the peaceful European aspirations of the Ukrainian people.

[[It is clear, however, that Yanukovich is not the right partner to talk to]]. On Sunday evening the president of the Ukrainian Parliament advanced the idea of a round table to bring together representatives of the government and the opposition.

This idea, warmly welcomed in Warsaw – where in 1989 the round-table formula allowed Solidarnosc to negotiate the exit from communism – should be encouraged.

In August 1991, president George Bush Sr, desiring stability, visited Kiev to ask the Ukrainians to give up their dream of independence and remain part of the USSR. Four months later the Soviet Union was gone. Let’s not make that mistake again.

Dozens of people were injured in a series of violent clashes between security forces, or “Berkouts”, and demonstrators during the evening of November 30 and the following day. Lviv-based Ukrainian language daily, Vissoki Zamok, announces that nine years after the Orange Revolution, “the Eurorévolution” is underway —

It is symbolic that on December 1, the anniversary of the referendum in favour of independence that took place 22 years ago, Ukraine was once again the theatre of mass demonstrations in support of its sovereignty, the rights of its citizens and its European future.

Vissoki Zamok claims that some of the most violent protesters are provocateurs working for the government, who are “paid $250 per day” to create chaos and attack public buildings so as to discredit the movement.

… there is no way out in the wake of Friday’s fiasco in Vilnius and a bloody Saturday in Kiev.