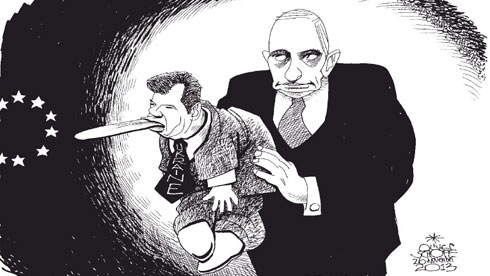 Europe, not much of a card sharp

The Ukraine’s decision not to sign an association agreement with the EU is partly due to the bloc’s inability to speak with a unanimous political voice on the global stage. Unfortunately, this EU flop does not appear likely to be its last.

In 2007, when Yulia Tymoshenko was still prime minister of the Ukraine, a European businessman attempted to conclude a contract there. He had spent sufficient time in the region to comprehend that one can achieve very little without paying bribes. The proposed Ukrainian deal nevertheless went wrong. The reason, he insists, was that Ms Tymoshenko demanded an astronomical commission fee. “I had never paid anyone that much before. Not even in Russia.”

During the past few months, Ms Tymoshenko, who was imprisoned on charges of corruption by her successor Viktor Yanukovych in 2011, has been used as a pawn in a power struggle between Russia and the European Union. The former won the battle. Europe has been made to look a fool, largely due to its own lack of unity and collective disorientation.

The EU wanted to sign an “association agreement” with Ukraine on November 28, at the Vilnius Eastern Partnership summit. The Europeans’ aim was to render this huge nation on the periphery of its boundaries more stable, prosperous and even democratic, by means of closer cooperation with it. This is in the best interests of Europe. In return, however, the Ukraine would have to, among other things, release Ms Tymoshenko.

No compensation for Yanukovych

[[Russia was keen to sabotage this deal. It wanted to keep the Ukraine within its sphere of influence]]. Moscow therefore proceeded to set up its own Customs Union, an internal market based on the EU model [currently comprising Russia, Kazakhstan and Belarus]. If the Ukraine refused to participate, the Russians warned, then it would turn off the supply of gas. It had already put the squeeze on imports of steel, chocolate and various other products. Armenia, which was also keen to sign an association agreement with Europe, was tormented to such an extent by Moscow that it ultimately made a U-turn. It is now firmly embedded in the Russian camp. Moldova and Georgia have also been put under substantial pressure, but nevertheless appear to have opted to join Europe.

Geopolitical power struggles are nowadays fought out using financial weaponry. The Americans have gathered data on literally everyone worldwide through Amazon and Google. This is also the reason that the US seeks to conclude so many trade agreements, to gain access to such firms. China is also a firm proponent of this form of financial poker. It is gradually purchasing ports throughout Europe. In the US, however, the Department of Defence is in charge of ports and waterworks – so that overseas companies cannot gain ready access to them. Why can they do so in Europe then? Is this a good idea in strategic sense? Why has there been no debate on the matter?

The answer, unfortunately, is that a Europe comprising 28 member states is simply incapable of defining a single political objective. It is therefore not in a position to play poker with other superpowers either.

Europe was officially unable to make an offer: the level of corruption in the Ukraine means that it does not comply with EU criteria. Half the EU nations, the “old” EU as it were, nevertheless said: let’s adopt a lenient approach and offer Kiev a financial incentive. The other half, primarily the former East Bloc countries, blankly refused to do so. [[Mr Yanukovych saw this discord, and promptly concluded that he could not rely on Europe]].

The European Neighbourhood Policy as a whole has now fallen flat on its face. For the past few days, envoys have been scurrying back and forth between Kiev and the European capitals. The only thing that no one actually thought to do was to talk to Putin. Foreign relations with him are indeed poor. At summits, held twice a year, European leaders sum up their concerns about the human rights situation in Russia, its visa policy, etc. These are technical matters. Issues that need to be organised. The problem is a political one, of course. However, no one has moved to discuss it with Putin.

After all, if there is no consensus on the part of Europe, then what could we say to him? And who should say it to him? In the absence of uniform foreign policy, Europe can only stumble from its current position of looking foolish to further humiliation.