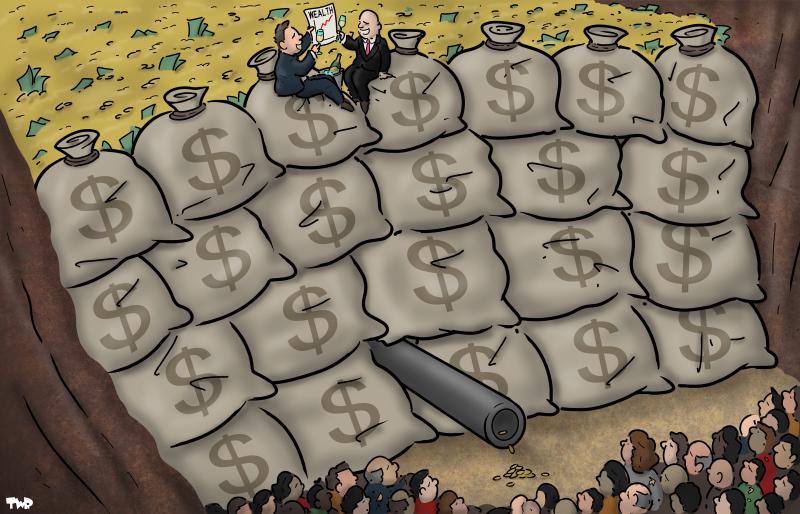 Concentrations of wealth and incomes have increased in recent years. The phenomenon is aggravated by the fragmentation of the labour market and persistent gender inequalities, two recent reports confirm.

In a climate of great uncertainty caused by the health and climate crises, many analysts are alarmed by the growing inequalities in our societies. Although Europe is one of the most equal regions in the world, it is far from achieving its goals of social justice and equality. Despite massive emergency income-support programmes in response to the pandemic, the fight against inequality is still not high on the political agenda.

Yet unequal societies are less able to cope with change. The Covid crisis is a clear example of this. Indeed, populations weakened by economic inequality are more exposed to the virus and its consequences. Furthermore, according to recent studies, the demographic and social characteristics of individuals are the main determinants of vaccine hesitancy.

By neglecting the structural nature of inequalities, public authorities risk compromising the effectiveness of strategies to combat the pandemic. Two recent studies provide particularly relevant analysis: the Global Inequality Report 2022, which takes a hard look at global inequality, and the annual report of the European Trade Union Institute (ETUI), which explores issues of social justice in the world of work. These reports call for action by policymakers, but also by civil society and citizens.

Concentration of wealth is increasing

The Global Inequality Report 2022 is based on the WID world database, which is compiled by researchers around the world. While differentiating the specific dynamics of different countries, it reveals considerable income inequalities: "the richest 10% of the world's population earns 52% of global income, while the poorest half earns only 8%". The disparities are even greater when it comes to wealth: the richest 10% own 76% of the world's wealth, while the poorest 50% own only 2%. The concentration of wealth is clearly increasing in favour of the very high income earners: the richest 1% of the world's population has almost half of the world's wealth. This dynamic, which has been going on for some thirty years, has even intensified since the start of the pandemic.

More : Beyond growth: reinventing Europe to save the climate

Since the 1980s, stock-market indices have soared, while wages have grown less quickly than productivity. Income from capital is now growing faster than income from wages, which inevitably increases inequality. Globalisation and European integration are often held responsible for this phenomenon. However, this assertion needs to be qualified. Empirical analyses carried out in various countries show that the trajectory of inequalities is largely determined by domestic public policies in the areas of taxation, education and labour.

Given this observation, a massive redistribution of income and wealth seems essential to meet the challenges of the 21st century. There is no shortage of possible strategies for fairer taxation: a review of tax-optimisation advantages, a crackdown on tax evasion, introduction of a progressive tax on large fortunes, or reform of inheritance tax. Promoting tax justice requires more harmonisation between countries. The recent watered-down agreement on the taxation of multinationals shows the extent of potential resistance and opposition. Yet, says economist Lucas Chancel, co-author with Thomas Piketty, Emmanuel Saez and Gabriel Zucman of the Global Inequality Report 2022, "it is essential that groups of countries cooperate to move towards common tax rules that will stop fiscal dumping."

The divisions in European labour became more pronounced in 2021. Despite the scale of EU financial support schemes, the crisis has had an uneven impact on workers. Short-time working and job retention measures have cushioned the risks of unemployment. However, young people and the least educated, who are over-represented in the sectors most affected by the crisis, have been hit hard. Moreover, gender inequalities persist: despite the efforts made over several decades, the gender pay gap is still barely narrowing. The current crisis only reveals the growing divide between well-paid, secure salaried jobs and precarious, low-paid jobs with health and safety risks. And a new demarcation has emerged: the possibility of teleworking or not.

Putting social justice back at the heart of European policies

The cumulative aspect of inequalities systematically weakens certain categories of workers. The influence of wages and working conditions on people's health is now undeniable. New forms of work (such as digital work platforms) and the changes brought about by the ecological transition are likely to accentuate these vulnerabilities. In a context where the Covid crisis is dragging down wages, the International Labour Organisation insists on the need to establish a decent minimum wage. As such, MEPs are currently drafting a directive that will guarantee all workers in the EU a fair minimum wage and increased collective bargaining coverage.

Beyond labour-specific measures, the ETUI report calls on the EU to make permanent the policy directions adopted in response to the Covid crisis. According to Nicola Countouris, ETUI Research Director and Professor of Labour and European Law at the University College London (UCL) School of Law, "the European social rights framework must be at the heart of the recovery and ecological transition plans". Indeed, the objectives of the European climate policy Fit for 55 require massive redistribution and increased democratisation at all levels. In the same vein, Lucas Chancel stresses the need "not to reactivate the European budgetary constraints frozen since the beginning of the health crisis. States will not be able to make the investments necessary to prepare the European economy of tomorrow as long as they remain constrained by the 3% deficit rule.”

More : Poverty and social exclusion are more likely if you are a woman

Inequality raises profound questions about the role of public policies in terms of redistributing resources. How can we ensure that measures to reduce inequalities actually achieve their goal? Can we imagine public policies that meet people's specific needs?

Among the avenues to be explored, the methods tested by the economist Esther Duflo – and described in her book Rethinking Poverty – are particularly promising. The principle consists of assessing the effectiveness of intervention measures through field experiments and randomised studies. Originally deployed in developing countries, these approaches are now being applied in developed countries. In Europe, the J-PAL Europe laboratory brings together a network of researchers working on the evaluation of various social policies, particularly in the education and employment sectors.

In addition to being scientifically rigorous, these experiments have the advantage of seeking to identify solutions as close as possible to real-life needs. Far from a top-down perspective, the aim is to understand the constraints and assets of individuals, to test possible solutions with them, and to retain only those measures that demonstrate their effectiveness. Considering the beneficiaries of social policies as people with their own plans is a real change of perspective in the fight against inequalities.