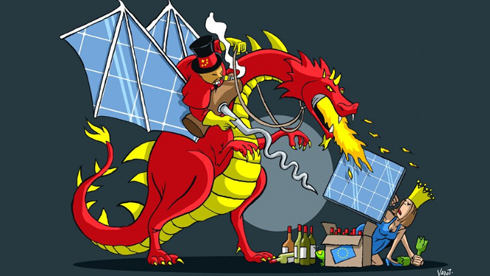 Europeans, comply or else…

Following the European Commission decision to tax imports of Chinese solar panels, Beijing has decided to launch a probe on European wine imports. And if the 27 do not get the message, other retaliatory measures will follow, warns the Chinese official newspaper.

China’s decision to launch an anti-dumping and anti-subsidy probe into wine imports from the European Union signals the country will safeguard its major economic interests – and it has ample cards in hand to do so.

The Ministry of Commerce said that it has started the probe at the request of local wine producers. It comes after the EU decided on Tuesday to impose an initial tariff of 11.8 per cent on imports of solar panels, cells and wafers from China.

If the two sides do not reach an agreement in August, the tariff will be increased to more than 47 per cent on average.

The EU made the decision in the face of strong opposition from China, and a large number of European enterprises are set to suffer as a result.

The wine probe serves as a timely warning that it is not just European photovoltaic enterprises that will be the victims if the EU sticks to its protectionist stance.

The lingering debt crisis in Europe has dented its economic vitality, but protectionism is not the solution. It will only incur tit-for-tat retaliations and worsen its economic prospects.

China has made relentless efforts to ease the situation by initiating negotiations with the EU, and it has made it clear that it seeks to solve the dispute through consultation and negotiation, not a trade war.

But by imposing the tariff on imports from China, the EU has failed to show a similar commitment.

The move will cause large numbers of corporate closures in China, and it has no choice but to fight back.

Tip of the iceberg

Wine exports are certainly not as important for the EU as photovoltaic exports are for China. In 2012, more than two-thirds of China’s 430 million litres of wine imports were from the EU, with a value of more than $1bn (€762m) while China exported $27bn worth of solar panel products to the EU.

But the probe into wine imports could be followed by more moves if the EU continues to ignore China’s interests. China’s overall imports from the EU reached $212bn last year, giving China much room to manoeuvre.

Now the ball is in the EU’s court. It needs to show willingness to solve the dispute in the upcoming negotiations.

As it has become a major target of anti-dumping charges by other countries, China also needs to start showing more teeth when protecting its legitimate interests.

A Chinese duty on wine would be ‘a catastrophe’

For French wine-makers, Beijing’s threat to impose a customs tax on European wines is a cause for concern because “the Middle Empire is now the first export market for Bordeaux” wines stresses French financial daily Les Echos before detailing figures to outline the scale of the issue.

With the equivalent of 48m bottles, it accounts for 22 per cent of exports and even 27 per cent if Hong Kong is included […]. That represents two and a half times as much as the German market. As for the worth of the sales, they generate €565m, or 26 per cent of the total.

French daily La Croix, for its part, says the consequences of a duty on European wine by China would be a genuine “catastrophe” for wine-makers of the Bordeaux region who are “trembling” at the idea that this could happen. Wine-making represents 55,000 jobs in the region and –

bankruptcies by producers and traders, and thus job losses, are to be feared if the Chinese follow through with their threat.

Les Echos notes that China is also present in the vineyards of southwestern France where Chinese investors own more than 50 properties.