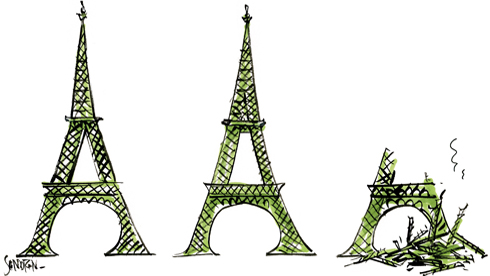 France’s elites are in denial

Accused of sticking its head in the sand over the crisis, France has been downgraded by Moody’s and become the biggest problem child in Europe. To the political elite in Paris, though, all that doesn’t matter, writes an author from Berlin in the conservative Welt.

It is rather bizarre: experts on the economy and scientists researching human mentality have been shaking their heads over the countries of southern Europe hit by the crisis for years now, just to share with us their bad news – and each snippet is more troubling than the last. And all the while, the talk doesn’t stop about “core Europe”, kept running by the “Franco-German motor”, which must not be allowed to “splutter”.

Meanwhile, in view of France’s steadily declining competitiveness and its horrendous national debt (currently at ninety percent of its GDP), a question comes up: are we dealing here with a naive blindness all round – or with the perhaps final Pyrrhic victory in the French art of throwing smoke?

Why did no one look any closer? One explanation, implicit and given unintentionally, was a statement two weeks ago by the former EADS CEO Louis Gallois, who gave a damming verdict on the French economy and demanded radical reforms. A “confidence shock” is needed, said the man who had made a career for himself out of lucrative government contracts. The tremolo to his voice, afflicted by crisis, was once again half-Bolshevik and half gold-plated, perfectly matching the working range of the declared enemy of globalisation, Arnaud Montebourg, who marches under the banner “Minister for the Restoration of Production.”

“The style is the man,” Madame de Stael once opined. French society still seems trapped in gab mode. The questions about the state of Nicolas Sarkozy’s marriage were of greater interest during his five years in office than his open disdain for the democratic separation of powers and the scandalous exploitation of the intelligence services to monitor the remaining cohort of critical journalists. (Print and online media in France receive millions of dollars in subsidies – which come with the to-be-expected taboos on what to report on.)

Even in the inbred Paris circles, reporters must observe clear boundaries. Otherwise, it might have been pointed out that, despite mass unemployment, Monsieur Montebourg was most anxious straight off to manhandle his attractive woman into the executive chair of the legendary music magazine “Les Inrocks”. And one could have reminded the acting foreign minister Laurent Fabius of his past as Mitterrand’s Prime Minister, when the state blood transfusion institute was accused of knowingly allowing three thousand French haemophiliacs to be given HIV-contaminated blood; while Fabius and his ministers were acquitted by a judiciary that was probably only partially independent politically, countless victims are now dead.

One certainly need not be an “Anglo-Saxon” (an even greater insult in today’s France than the former “Boche” flung against the Germans) harbouring an intense mistrust of the state to find this denial of past and present highly dangerous and to find a key cause of the crisis in the continuity of the same old incompetent elites.

Most authoritarian of all Western European societies

True alternatives are rare. Unlike in Germany, there are no Christian or Social Democrats [to fall out over the embracing of the market economy], leaving the political left and right free to agree above all in their statism, in keeping private middle-class initiatives small-scale, and in a protectionism that, crossing political divides, shamelessly uses the anti-capitalist rhetoric of “egalité toujours.” Meanwhile, France’s exports are plummeting, youth unemployment is exploding, Muslim Jew-hatred is running rampant in the suburbs, and the social security systems are facing collapse, threatening the state with bankruptcy.

But where are the French economic essayists settling scores with the quasi-socialist character of their country? Where are the political scientists, continually returning to Montesquieu’s separation of powers, who would at some point put the web of inter-institutional relationships under the magnifying glass?

Ironically, the country that saw the greatest turbulence during the student unrest of 1968 has remained the most authoritarian of all Western European societies. The vast majority of young people still dream of becoming a “fonctionnaire” – of a sure-fire job in the loved-hated bureaucracy. Meanwhile, the cinemas continue to show finely tooled sentimental trips down memory lane, in the spirit of the blockbuster “Amélie”: the dreamt-of return to the cloistered garden of the Gallic idyll, where the Beaujolais tastes wonderful forever and even the baguette is subsidised…

Losing the triple A is good news

Moody’s downgraded its rating last night of French treasury bonds from Aaa to Aa1 — a development that will affect interest rates charged to France on financial markets. “But is it really such bad news?” wonders a Les Echos columnist. “Although it may seem surprisingly paradoxical and cynical, I would like to say that it is quite good news” —

What is important is that the Moody’s decision will force France to get a move on and adapt. In particular, Moody’s highlighted the declining competitiveness of our economy, the rigidity of the labour, goods and services markets, the budgetary situation and the difficulty we will have in resisting further shocks in the Eurozone because our trade with emerging countries is insufficient. […] Above and beyond that, it is our inability to keep our promises in the long term (30 years of unemployment and public spending deficits) which has been criticised.

The government thought it had time, but not any more. It wanted to avoid a shock, now it has had a huge jolt. […] For ten days, it had been floating on a cloud. There was the positive reception for theGallois report [on the competitiveness of French industry] and the measures that followed, and a good figure for growth in the third quarter. […] All of that has come to an end!