After the agreement on the Greek debt 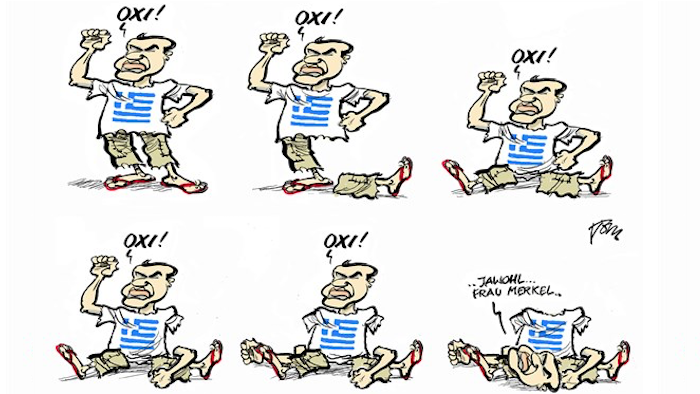 After the agreement on the Greek debt

There are only losers in the agreement clinched on Monday at dawn by Greek prime minister Alexis Tsipras and his eurozone partners. First and foremost the Greek people and the German and European leaders, believes the European press.

This press review has been made with the contribution of euro|topics and for Internazionale.

After a deal between Greek and eurozone leaders was hammered out following 17 hours of arduous negotiations, there is really nothing to cheer about, writes Michał Sutowski in Krytyka Polityczna. “With PM Tsipras’ back against the wall, the German government has pushed through nearly all its conditions; it’s a minor consolation for the Greeks that a ‘temporary Grexit’ turned out to be a negotiation stunt rather than a real proposal and that the restructuring fund will be located in Athens instead of Luxembourg”, writes Sutowski. He stresses that the negotiations have clearly shown the EU leaders’ goal was “to crush the Greeks’ resistance and not to reach a compromise” –

Angela Merkel had a chance to join the pantheon of the great, in a way, of “progressive” European conservatives. Had she forced through, against the German press and her own finance minister, a civilized reform package in exchange for a partial debt restructuring, she would have been on the same footing with Otto von Bismarck and Benjamin Disraeli. It seems though that she decided to become a ‘thrifty housewife’ instead.

“It may sound a bit dramatic, but there is no better and shorter way to describe the emergency situation”: Greece might not be a country anymore at the end of this week, writes Tine Peeters, journalist at De Morgen. Due to the new agreement the Greeks no longer have self-determination, both on political as well as economic and financial level —

The growing chaos can be attributed to the European and Greek leaders. Alexis Tsipras hoped by organising the referendum he would have made Greece stronger against Europe. But he has gambled it away and lost Greece everything. Now pawnshop-Europe takes over, under strict conditions, ‘the state formerly known as Greece’.

Larry Elliott criticises the latest bailout conditions, which, he claims, rely on dodgy economics. By stripping the Greek government of “automatic stabilizers” – the ability to increase the deficit in bad times to promote growth – Greece’s creditors have condemned the country to further pain. Elliott suggests two ways to end the crisis —

The first is to write off a large chunk of [Greece’s] debts. The other is to allow it to grow at a pace that allows it to service its debts. This deal offers neither. [...] This is not a solution. It is a chink of light filtering through the bars of the debtors’ prison.

Stephan-Andreas Gasdorff points out one German politician that lost during the negotiations over Greece: Social-Democratic vice-Chancellor Sigmar Gabriel. By flip-flopping his position on a temporary Grexit, Gasdorff writes, “Gabriel has failed his practical test” which required him being “trustworthy, value-driven, and consistent.”

The drama around Greece has ended badly; but first and foremost for the SPD. Because the party lost a future candidate for Chancellor. […] And the worst part: everybody saw it; everybody knows it. Even Sigmar Gabriel himself – his political instinct will tell him this.

Europe has deprived Greece of its sovereignty and is treating it like a little child, Lucio Caracciolo writes in anger in the centre-left daily La Repubblica:

Greece has ceased to exist as an independent state. What remains are the Greeks, who are called on not only to make devastating economic sacrifices but also to suffer the humiliation of being treated like minors not allowed to take care of their own affairs. Custody is formally being handed to Brussels and Frankfurt, but effectively to Berlin. A strict father who was tempted not to recognise the child, but was eventually convinced that it would be better to act as if Greece retained a modicum of Hellenic sovereignty. At least for now, to prevent the declaration of the death of the state under its supervision from causing the collapse of the euro, and thus of the European Union.

El País discusses in its editorial the “bad handling of the government” of Mariano Rajoy in its failure to win the position of eurogroup president for Spanish Finance Minister Luis de Guindo. It is the current president, Dutchman Jeroen Dijsselbloem, who has been re-elected, and that –

in spite of his controversial management and Germany’s apparent support for De Guindos. Without casting doubt on that support, Berlin is today more interested in keeping Dijsselbloem than in promoting a change of hands at such a delicate moment for Europe. It is true that Dijsselbloem benefitted from the complex agreement between Brussels and Greece.