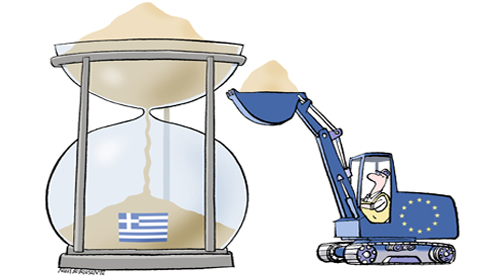 After a series of tough negotiations, the agreement on reducing the Greek debt reached by the Eurogroup and the IMF allows about €44 billion in aid to be released and gives Athens a little breathing room, but does little to help the country in the longer term.

The Brussels agreement is, in fact, the result of a consensus reached between Germany and the IMF. It was neither straightforward nor a foregone conclusion. On the contrary, this meeting that dragged on for more than 12 hours could have ended in train wreck, as a number of sources have claimed.

For all those who held that it was a foregone conclusion that the tranche would be paid out and our debt restructured, it should be noted here that, had the austerity measures not been voted through [in early November], nothing would have been given to the country and Greece would find itself once more in a very sticky situation. On the other hand, we must say that our partners could have found a more dynamic way to solve our debt problem.

The solution chosen here – the package of instruments, this entire orchestration devised to avoid the clear cut choice to slash our debt directly – is not the best. And this shows, through the suspicion levelled at Greek politics and the influence of the Protestant ethic in European policy.

Europe did not act with flexibility. It did not exceed the miserly, pessimistic, somewhat sordid approach of heartless accountants who cannot see beyond their own noses. It does not respect, as it should, the sacrifices of the Greek people.

One thing is certain, the Europeans could have been more gallant with Greece. However, “it’s better than nothing", as the saying goes. Without this agreement, today would have been a different day. Now we can breathe. Even if there are constraints and sensitivities, we must acknowledge that we have seen some progress.

Foreign aid is not enough and it will not last for long. This means that Greece, from now on, beyond fulfilling its commitments, should find its own path towards development.

By putting to good use the stability that outside aid has given us, all our internal forces – political, commercial, social – must move heaven and earth to get the country on the road to a final recovery.

After several weeks of negotiations, the Eurogroup countries and IMF meeting in Brussels on November 26 had to “satisfy a vital precondition: reduce the amount of Greek debt,” writes Le Monde. “If not, there would be no future, only the darkness of a monumental bankruptcy that could rock the entire eurozone.” The two sides now disagree over the means:

The IMF favours a radical solution: write off part of the Greek debt held by its creditors (the central banks), a move modelled on what private banks agreed to at the start of 2012. Neither the ECB nor Germany, which will soon be caught up in an election campaign, want that. In the course of the night, the 17 agreed to a complex financial package that would see Greece buy back its own bonds and a lower interest rate on bilateral loans to Athens, etc. – which would lead to the lowering of that total Greek debt by €40 billion. Further measures will have to be taken if the situation demands it, to ensure Greek debt is kept to 124 per cent of its GDP by 2020 [the target set by the Agreement]. It’s a smart patch-up job, as this is the goal that matters and that determines market confidence. It’s a healthy compromise too, and the Greeks deserve it: they have suffered enough along the road to recovery.