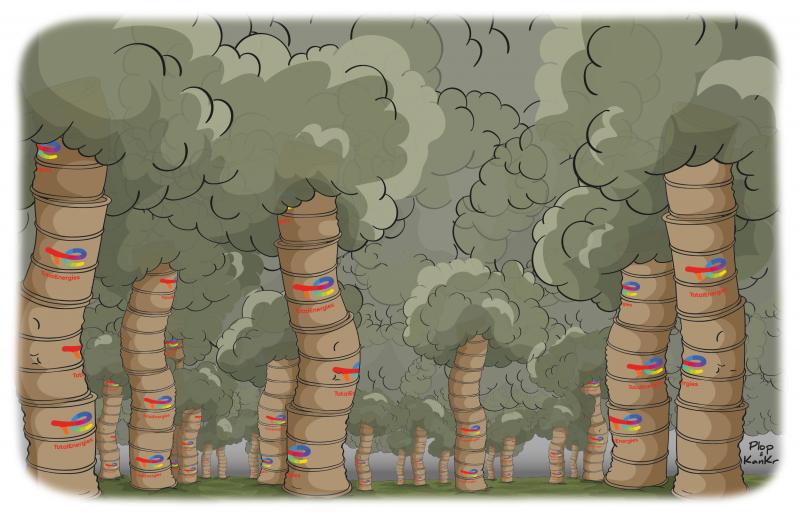 The farce of environmentally sustainable biodiesel

An EU directive is set to ban the import of palm oil for use as biodiesel. In the meantime, diesel continues to be produced from oil deriving from plantations that replaced virgin forest. A good illustration is provided by ENI and TotalEnergies in Indonesia.

In collaboration with the Pulitzer Center

Italy's ENI and France's TotalEnergies (like all European biofuel producers) have long passed off diesel made from palm oil from deforested land as "environmentally friendly", hiding behind its legal certification. Not for nothing did the European Parliament vote in early October 2022 for an immediate ban on palm oil imports for this purpose.

We have obtained information that unmasks the methods of these two energy giants which together operate a huge number of petrol stations in Europe  – and particularly in Italy, Europe's third largest producer of biodiesel after Germany and Spain.

Technically, the biodiesel sold by the two companies complies with the EU’s certification system. Since 2009, this has required member states to replace fossil fuels with an increasing share of eco-fuels to combat global warming (14% for transport by 2030). It is precisely this mechanism that has allowed multinationals to continue to import palm oil without guaranteeing its environmental sustainability, even thought that guarantee is theoretically required by other EU legislation.

One third of the forests lost

In this way, the EU has ended up stimulating the demand for palm oil to produce biodiesel. Thus have tropical jungles been converted into oil palm plantations, adding to carbon emissions. Because of palm oil, about one third of Indonesia's forests have been lost over the past twenty years. Almost 50% of Europe's palm-oil supply comes from Indonesia.

To remedy this disastrous "rebound effect", in 2018 the EU decided to remove palm oil from the list of renewable energy sources. However, this ban was only to take effect in 2023, with a definitive phase-out delayed until 2030. Until then, palm oil can still be certified as sustainable as long as it does not come from areas deforested after 2008.

ENI and TotalEnergies announced that they would no longer use the fuel as of autumn 2022. For the past four years, however, they have continued to import it (more than 1 million tonnes for ENI), certifying it according to the so-called "mass balance" (1). This is an accounting method that the EU has officially recognised in order to help businesses. Alas, the method contradicts the very principle of sustainability. This system is appreciated by producers for its efficiency. But it does not allow the same level of traceability as a "segregated" system, where raw materials are physically separated throughout the production and transport process. This is why many environmental organisations consider it to be folly, as we shall see.

To unravel the accounting trick, we have followed the entire supply chain back to its source - from the biorefineries where ENI and TotalEnergies transform palm oil into biodiesel – respectively in Gela and Porto Marghera in Italy and La Mede in France – to the plantations where the palm fruits are harvested to produce the oil. The two companies import significant volumes from the same Indonesian refinery Sari Dumai Sejati, which belongs to the Apical Group, one of the world leaders in the sector.

ENI also sources its oil from refineries belonging to at least four other producers operating in Indonesia. The local refineries process the crude oil supplied to them from a number of mills, where the fruits are pressed and macerated. From the mills, each refinery receives certified batches of oil, i.e. from verified plantations, alongside batches of more dubious origin – i.e., from plantations situated on land deforested after 2008.

In the same tanks

However, this separation by …