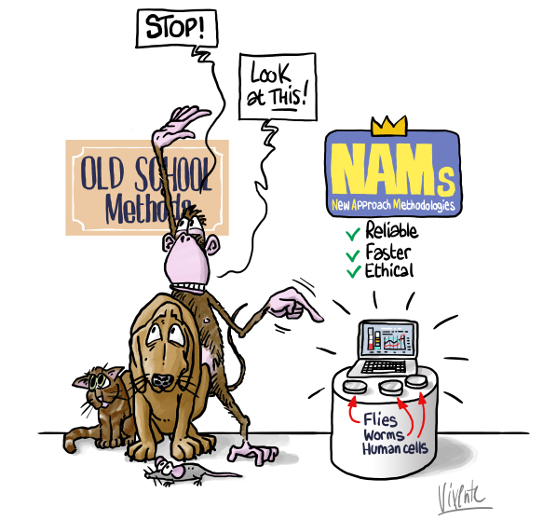 How Non-Animal Testing Can Reshape Health and Environment Policies

The development of alternatives to animal testing is not only an ethical and moral need, but it is also a necessary step to effectively address pollution – the largest environmental cause of disease and death worldwide

Footage capturing unacceptable cruelty and abuse on animals in a Spanish testing facility  has recently made headlines and prompted many reactions. The 24th of April is celebrated as the World Day of Animals in Laboratories. Its objective is to promote alternatives to animal testing that are currently revolutionising toxicology, a domain of research where the European Union (EU) has significantly increased funding to advance chemical safety assessment.

Around 10 million animals – mainly rodents, but also primates, cats and dogs – are used every year in scientific experimentation within the EU. Countless mammalians are killed globally to test diverse substances. Laboratory animals are protected under Directive 2010/63/EU, which imposes high requirements on animal welfare standards. It spells out the Replacement, Reduction and Refinement principles (3Rs) and requires applying alternative solutions – or New Approach Methodologies (NAMs) – when they exist.

In 2013, the EU put a ban on animal testing for ingredients exclusively used in cosmetics, showing the world that moving away from animal experimentation was possible. Human cell lines and tissues, organ-on-a-chip (in vitro), and advanced computer-modelling techniques (in silico) are among alternative available methods that overcome the limitations of animal testing.

Condemned by NGOs and citizens, running animal tests is slow, expensive, and sometimes unreliable to test certain products, delaying the detection of harmful substances. It has become evident, for instance, that half of the animal experiments conducted to develop pharmaceutical products were not relevant due to interspecies differences. There is also a growing frustration regarding current approaches to chemical safety assessment, which are too reliant on animal testing to accurately extrapolate risks to human health.

The amount and variety of chemicals in use are tremendously increasing. Thousands of substances have never been tested for their toxicity, and global chemical production is expected to double by 2030. While pollution accounts for one in ten deaths worldwide, there is an urgent need to develop faster, more reliable and ethical solutions to address sound management of chemical products globally, without increasing animal experimentation.

To that end, the EU is investing 60 M€ over the next 5 years in three international projects entirely dedicated to advance regulatory toxicology without the use of animal testing, a budget of the H2020 Program that has more than doubled since the last funding period.

In March, 15 organisations led by the University of Birmingham launched PrecisionTox. This project focuses on human cell lines and a diverse suite of biomedical model organisms, such as fruit flies, water fleas, round worms, and embryos of zebrafishes and frogs. These non-sentient organisms are not regarded as animals in legal standards and share many genes with humans by evolution. These rapid testing, 3Rs compliant and cost-effective models will enable to map the origins of toxicity pathways on the branches of the animal evolutionary tree to predict chemically induced adverse health effects to all animals, including humans.

More : How has global warming impacted your town?

Coordinated by the Vrije Universiteit Brussels, the ONTOX project will kick off on the 1st of May with the objective of creating innovative animal-free methods able to predict chronic toxicity in humans while taking into account tailored exposure. The NAMs developed by the 18 beneficiaries rely on ontology and artificial intelligence to measure the toxic effects induced by any kind of chemicals (pharmaceuticals, cosmetics, food, and biocides) on the liver, kidneys, and the brain, but will be equally applicable to other organs and organ systems.

In June, the Risk-Hunt3r project will succeed to EU-ToxRisk, a 5-year project beneficiary of a prior 27 M€ EU grant which is currently coming to an end. The consortium of 37 partners will build on its recent experience to advance a novel framework for animal-free risk assessment under the leadership of Leiden University. Risk-Hunt3r combines human exposure scenarios, in vitro testing, and computational methodologies to obtain data on mechanisms of toxicity to identify pathways of toxic responses in a truly human-centric approach.

Advancing toward the replacement of animal testing will translate into regulatory and industrial practices that will better protect humans and ecosystems, by enabling to identify, classify and ultimately remove hazardous substances from the environment.

The European Commission announced a zero-pollution ambition in the Green Deal. The Chemical Strategy for Sustainability is one of the first steps to deliver “a toxic-free environment” and is expected to result in significant revisions of the EU legislative framework, such as the Cosmetics Regulation. NAMs promise to fill the knowledge gap that challenges risk assessors and regulators while addressing the growing number of chemicals whose toxicity is still unknown with faster, more reliable and ethical solutions.