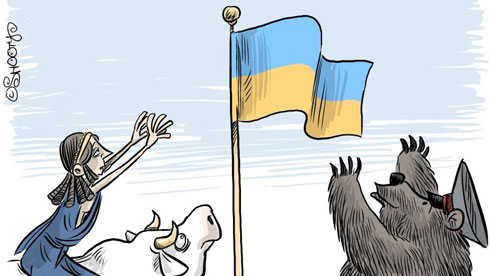 How Putin miscalculated in the struggle for Ukraine

To Moscow the ‘colour revolutions’ were sinister, threatening its sphere of influence.

No event has done more to spook the Kremlin, over the last decade, than the Orange Revolution in Ukraine in 2004. Now Vladimir Putin’s worst moment looks like turning into a recurring nightmare as demonstrators once again fill Kiev’s Independence Square, demanding that their country move closer to the EU and further away from Russia.

The demonstrations in Ukraine are both a humiliation and a threat to Mr Putin. While the Russian president may laud the deep cultural and historical ties between Ukraine and Russia, he is discovering that tens of thousands of Ukrainians would prefer to brave freezing temperatures and flying truncheons rather than be drawn closer into the Russian sphere of influence.

What is more, if a popular uprising can once again threaten to topple a corrupt and intermittently despotic government in Ukraine, then the potential lesson for Russia is clear. After all, it is less than two years ago that demonstrators filled the streets of Moscow to protest against the Putin restoration and to label his United Russia party as the “party of crooks and thieves”.

The West has always coveted the Ukraine

This southern country with its 45 million inhabitants, which runs the length of the Black Sea, has long been a “choice cut,” writes the provocative author and Russian opposition figure Eduard Limonov in an an opinion piece published by Izvestia.

“Significantly larger than Poland,” Ukraine has always aroused western desires, continues Limonov, who, having lived for several years in Paris and New York, returned to Moscow in the early 2000s to found the “National Bolshevik Party,” a movement that aimed to defend Russia’s lost grandeur. "Do you remember the battle of Poltava in 1709? Pushkin wrote a poem about it. And who was against us? Sweden and Poland. The very same countries, which, 300 years later, are now moving heaven and earth to draw Ukraine into the bosom of Europe.” In conclusion, he continues —

We can clearly see that history, which is as pugnacious and competitive as ever, is repeating itself as though nothing had ever happened. We can see that the West is stepping on our toes, and that its aggressive nature has not been tempered by the years. The West is constantly defying us and swallowing our former republics one after the other. The time has come for us to stand up to it.