Report Spain
Evicted people in front of an empty building where they found refuge in Seville and which is now occupied by the Corralia Utopia movement on May 30, 2013 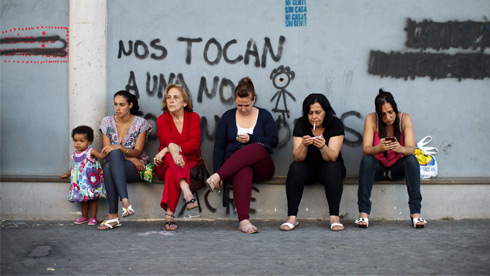 Evicted people in front of an empty building where they found refuge in Seville and which is now occupied by the Corralia Utopia movement on May 30, 2013

For hire for: thinking, looking after a house, even if this job includes picking cabbages. To pen all sorts of texts, fiction or not, including correspondence. A job that involves waiving my own signature, if requested[...]. To take animals or people for a walk, preferably persons. This service includes conversation. To prepare actions of obedience or disobedience, public or private.

Any service that you are interested in and that is not in this list will be considered sympathetically.

Most of the replies, despite my injunctions, were requests for sexual services, some of them wildly imaginative. But hardly anyone took my proposal seriously. Yet it was true, like everything I write and publish in the journal. It was real as the fact that our power got cut off one month later, as real as the coins that were counted out before I could buy milk for breakfast. But this kind of thing has to be experienced to be understood, for one to become aware. I was aware, or so I believed – and yet when this fellow came up and pressed the eviction notice into my hand, a chilling sensation of guilt unleashed some inner resources. [[Naked and terrified, but it has to be put into words. The fear has to be declared, the anxiety expressed, the guilt spoken of]].

My name is Cristina Fallarás, the evictee who tells it like it is, and exactly four years before I got the urge to talk about this, one warm morning in November, at 10am – to be precise, on Monday, November 17, 2008 – the director of the newspaper where I was adeputy managing editor [ADN, a free Spanish daily newspaper that ceased publication in December 2011], let me go. Eight months pregnant. At the time, Spain had two-and-a-half million unemployed – what a barbarity, we all thought, what a joke – and the most insightful forecasts held that this creeping crisis might go on until 2010, perhaps even into early 2011. Come on, we responded all at once, a crisis can’t go on that long! The government of José Luis Rodríguez Zapatero was speaking of “green shoots”, that we had hit rock bottom and that everything would soon be blooming once again. Shortly afterwards the Socialists injected billions of euros into the Spanish banks. Of public money.

That is where my eviction began – with my dismissal. Last November, El Pais laid off 129 journalists. [[I remember thinking: “My dismissal card; come on down, there’s lots of room”]]. I’ve been here before, so I know the next steps. Namely: stage one. I have some worth, I’m a big professional; I have my severance pay, a pretty sum, and my unemployment benefits. For at least a year and a half. I take two months to take a deep breath and suck it up. The first stage lasts at least a year.

Stage two. My unemployment benefits are about to run out; maybe we shouldn’t have gone on that holiday. We’re going to change our brands of soap, food, clothing. Priority goes to the children: don’t let them notice anything. I have to get on with something – a consulting firm, a small business, a communications agency. I’ll invest what remains of my severance pay in my family’s future. Damned politicians. The second stage lasts the entire second year.

Stage three. No holiday for the kids this year. Honey, we have to get rid of the car. Hell, it’s unbelievable how quick the unemployment money ran out. From now on, only the cheapest brands, rice in bulk: for the adults, no clothes. The small business hasn’t taken off yet; how is it going to turn a profit a few months from now? And what if I’m not such a good professional? And why hasn’t my partner found any work? Maybe he’s letting himself go. [[I need some pills. If I run into a politician on the street, I’ll punch him on the nose]]. Or it’ll be an employee at my bank that will get socked. If they call me again about the late rent, I’ll explode. I really need to take some pills. Stage three covers the first two-thirds of the third year.

Stage four. I need stronger pills. We’re months behind with the rent, water and gas. The bank isn’t returning my calls. Honey, the meat is for the kids. Is it just me, or am I really aging terribly fast? No one rings us up. I’ll head down to the supermarket. You keep the cashier busy while I stuff some toothpaste and razor blades under my jacket. The fourth stage ends with eviction. What’s left of you now is covered by the official statistics.

This article first appeared in Spanish on December 12, 2012 in the Argentinian online journal Anfibia.