Report Spain
Demonstration by anti-eviction group, the Platform of People Affected by Mortgages, trying to stop people being removed from their home in Barcelona in 2011 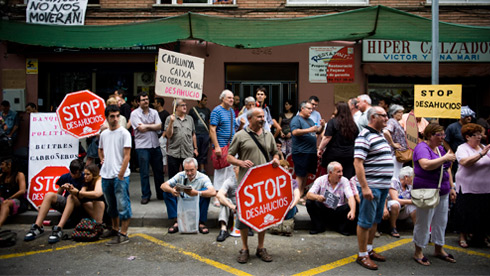 Demonstration by anti-eviction group, the Platform of People Affected by Mortgages, trying to stop people being removed from their home in Barcelona in 2011

Getting back to the moment when everything fell apart:

“Mama, there’s a man to see you.” With the helicopters adding their soundtrack to that of the imminent general strike in the streets, I have just piled all the court papers on the table and got ready to write an article for El Mundo.es – it must be told, putting it in words is a necessity, putting it in words will save us – to be posted on my blog, which dominated the web site’s homepage for a long time, all day long. It was entitled “My eviction has come”

In the morning, when working alone at home, I don’t open the door. Morning doors always open up to bad news. But 7.40pm doors generally bring friends or a neighbour. This time around, however, when I opened up to find myself facing the man on the landing, I knew what had brought him here.

“I’ve come to bring you a notice from the court,” he says, toting a thick bundle under his right arm. His left hand hands me a form.

“Is it the eviction order?” I’ve been expecting this for some time, ever since my bank told me that if I wanted to know how my mortgage was doing, I need only contact their legal department. When the bank says “legal department”, you know the matter has been referred to a place where they put matters in more ominous terms. [[It’s a feeling similar to how teenagers feel when confronted with “grown-up matters”]]. That’s something that they’ll have to go through, that they’ll have to hear, but the real gist of those “grown-up matters” will still elude them.

“Er, er, more or less,” he says hemming and hawing. “You’ll have to appear in court and you’ve got to sign this.”

“It won’t make any difference.”

I can hear the first firecrackers heating up the general strike, which one pundit redundantly called a “political strike”, as though it could be anything else.

“Get into the living room, children.”

And then Facebook and Twitter suddenly go berserk, radio and TV stations too, and everybody’s looking for me. The telephone rings. It’s the producer of a prime-time television talk show – peak ratings guaranteed.

[[“Hello, Cristina? We read your story and we’d like to have you on the show.]]

“Just so happens I’m in Madrid right now for the Eñe Literary Festival.”

“Impossible, my panel discussion here ends then. Actually, everything’s difficult because I don’t have a ticket either…”

“No matter, we’ll send a cab and pay for a night in a hotel. I’m sending a ticket for you.”

When I arrive at the private television channel’s studios, they ask me to take a seat in the waiting room beside two couples. The older couple are in their 70s: she is nervously pampering her hairdo and smoothing her dress, she seems so out of place here, a woman from the other side of the screen, in front of which she spends hours and hours of a retirement she had imagined to be more financially comfortable. Her husband, despite the imposing girth and ruddy complexion of a rustic who ended up in the big city, has simply ceased to exist. Later on I’ll see a tear run discreetly down his cheek.

As for the younger couple, the man’s in his late 40s, the woman probably five years younger. Their faces show a mix of emotion at finding themselves here in a television studio, in the holy of holies, and sheer bewilderment.

“We got evicted,” the man explains with an Andalusian accent. “First they evicted us from our home, and now they’re going to evict my parents because they stood surety for us to buy our flat,” he says motioning towards his father with his chin. “Their flat, where they’d lived their whole lives long. All four of us are out in the street now, with our children. This is our last resort, to go on television.”

[[I feel a blow to the stomach – and to the head, overflowing in tears.]] Suddenly, I don’t know what I’m doing here anymore, with these four people whose misfortunes seem so alien to me. “This is our last resort.” How do I explain we’re not in the same boat? How do I explain this nauseating urge to flee, to call a cab to take me home?

I look around desperately for one of the show hostesses. I need to know they’re not going to seat me in this utter abyss, where millions of viewers are dangling their legs whilst wondering what I am doing here. I hadn’t really realised what I am till now. And I’m overcome with doubt: would I really be evicted? Would I really be forced to join the ranks of hundreds of thousands who have nothing left? Is this what has brought me to these TV studios in a Madrid suburb?

“Excuse me, Miss, can you tell me what I’m supposed to do here?” I ask the hostess, a hint of poorly contained irritation in my voice. The girl looks at me dumbfounded.
“To take part in the show! You’ll be sitting here next to so-and-so and so-and-so, who’ll say their bit and…” I finally relax a bit, though I’m going to put up a fight. I’m an evictee like so many others. But I can still tell my story and that will save me. And afterwards, sometimes I retch.