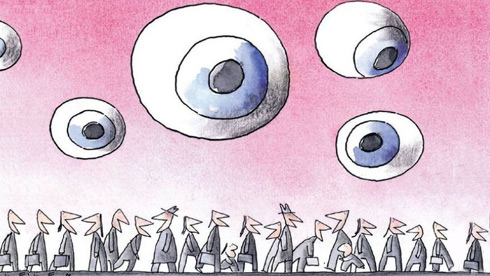 Due to its strategic location, Cyprus has long been a hotspot for spies. The British secret service has located one of its main listening posts on the island: complete with a staff of agents disguised as tourists, who, in partnership with their American colleagues, intercept optic fibre cables that channel communications between the Middle East and Europe.

In compliance with the rulebook, one of the agents is wearing yellow shorts, others are sporting baseball caps. Their brief is to avoid suspicion. No one is to know that they are there to spy in Cyprus – which, moreover, is the site of a British military base. So the Americans have been instructed to dress up as tourists before setting off on the road to Agios Nikolaos – which is home to one of the main listening posts maintained by the British signals intelligence agency, Government Communications Headquarters (GCHQ). It has now emerged that a UK military base on the island is the "foreign station" codenamed "Sounder," which figures in the documents disclosed by American whistleblower Edward Snowden. This was the conclusion of an investigation conducted by Greek daily Ta Nea, [Greek] TV channel Alpha TV, the Italian weekly L’Espresso and Germany’s Süddeutsche Zeitung.

The listening post is located in eastern Cyprus, in a poor region close to the Green Line, which separates the Republic of Cyprus from the Turkish part of the island. Aerial photos show it to be composed of a number of buildings, satellite dishes and a radio antenna system. The surrounding area is rocky and desolate, and five kilometres from the nearest beach and the closest town, where people might ask questions about foreigners in disguise. The main advantage of the site is that it offers a peaceful venue for GCHQ and NSA eavesdropping, which is not only conducted in better known centres in the UK and the US, but also in Cyprus.

Only 100 km from the Syrian coast

In the late 1940s, the island already served as a central base for British intelligence in the Middle East. The situation in Sinai, Iraq and Syria was monitored by spies from the island benefited from an ideal strategic location: just 100 kilometres from the Syrian coast, and not much further from Israeli and Lebanese flashpoints. Since then, Cyprus has also become a major hub for the monitoring of the Internet and telecommunications in the Middle East and North Africa: 14 submarine cables are connected via the island. So if you are calling Berlin from Beirut or writing an email to someone in Tel Aviv, there is a strong probability that your data will be routed via a fibre optic cable located on Cyprus. In the wake of the Snowden revelations, it is widely known that these cables are routinely intercepted by British secret services.

GCHQ took advantage of the London’s colonial heritage: even after the independence of the island in the 1960s, the British Crown continued to maintain two military bases on the island. And unlike traditional military bases, these twin "Sovereign Base Areas" were considered to be fully fledged British overseas territories. One of them now provides the venue for the Agios Nikolaos listening post.

The British spies can also count on the precious assistance of the publicly owned Cyprus Telecommunications Authority (CYTA), which is the co-owner of a large number of submarine cables. The telecommunications company has a contractual obligation to cooperate with the British, which effectively means that it is obliged — like numerous companies in the UK and the US — to collaborate on interceptions required to satisfy the British secret service’s thirst for data.

"Mastering the internet" is the declared objective of her Majesty’s spies. With every passing second, British agents intercept hundreds of gigabytes: of emails, telephone calls, and other data. And clearly, Cyprus also serves as a hub for agents tasked with sensitive missions: for example, those who spy on Israel – a country which, under the codename "Ruffle", collaborated and exchanged information with both the Americans and the British. It was also from Cyprus that a group of agents succeeded in infiltrating the Tor network, which was considered to be secure. In a documented that dates from 2012, they were hailed as "devoted people" who had already taken part in "large numbers of difficult missions."

NSA sends its own agents to Cyprus

Although Agios Nikolaos is officially a British base, the reality is that it is a shared Anglo-American project. On several occasions, the British came close to shutting down the listening post, which had to be downsized for financial reasons. On each of these occasions, the Americans finally rode to the rescue so as not to lose what they view to be a critically important strategic base. And they did not count the cost. Today the National Security Agency (NSA) foots the bill for half of the base’s operating costs. For GCHQ, the base must continue to operate at any price so as to ensure "healthy relations with American customers."

For many years, the NSA, which is the major American customer, has sent its own agents to Cyprus. But as this practice is contrary to the agreement signed by the British and Cypriot governments, the American spies are instructed to arrive incognito. According to the NSA rulebook, they have to pass themselves off as tourists, for example as European travellers – but under no circumstances as "typical Americans".