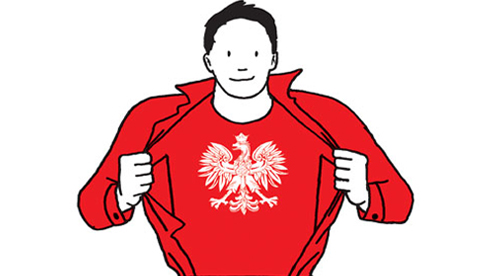 It’s cool to be Polish

People have grown used to thinking of Poland as a country of emigrants — just ask the British, the Irish or the Germans. Yet more and more foreigners are now applying for Polish citizenship. Warsaw’s Rzeczpospolita daily reports.

When the South American billionaire and owner of the Colombian airline Avianca, German Efromovich, wanted to buy Portugal’s largest air carrier, TAP, he encountered a seemingly insurmountable problem: according to European law, non-EU investors could not buy more than 49 per cent of shares in a European airline. However, he quickly found a solution which he announced to an astonished audience of journalists at a press conference in Lisbon: “I’ve applied for Polish citizenship. I’m entitled to it because my parents were both Polish”. And indeed, a short time later on December 5, 2012, Mr Efromovich received his Polish passport.

Born in La Paz into a family of Polish Jews who left Poland shortly after the end of the Second World War, the entrepreneur says he is proud of his Polish roots. However, his Polish citizenship hasn’t been of much use to him yet, not since the Portuguese government cancelled the TAP deal, claiming Efromovich hadn’t presented sufficient financial guarantees. However, that doesn’t change the fact that Poles now have another compatriot — and one that has already shaken up the Poland’s list of wealthiest people. With a personal fortune of €875mn, he is currently ranked at number five.

Playing with the white eagle on your chest

Yuri Gladir, who has played for the Kędzierzyn-Koźle volleyball team Zaksa for four years, may not be worth as much as Mr Efromovich, but he can certainly beat him to a smash at the net. Born in Poltava, Ukraine, Gladir, who lives in Poland with his wife, Marina, and his Polish-born daughter, Daria, has just received his Polish passport. Now his dream is to play for the Polish national team: “Playing with the white eagle on your chest is every volleyballer’s dream because Poland can compete with the best in the world”, explains Mr Gladir.

However, the Poles by choice who have received the most publicity are from the world of football: well-known names who spiced up the performance of league teams before going on to don the national shirt. “I love Poland and its people. I’d like to become a citizen in a country where I’ve experienced so many beautiful moments”, declared Brazilian-born Roger Guerreiro, who at the time was playing for Legia Warszawa. His citizenship application procedure went smoothly when it turned out that the national team urgently needed an attacking midfielder.

Since last year, Polish citizenship can be obtained more quickly and more easily through a province-level procedure. It can also be granted by the President of Poland, who officially gave citizenship to 2,500 foreign nationals last year. But most applications are still submitted to the provincial authorities. The central Mazowieckie province received nearly 500 last year, up from just 107 in 2008. Before Poland’s EU accession in 2004, such applications were rare.

A nice and attractive country

So why are more and more foreigners eager to become Polish nationals? It’s a pragmatic choice. According to Nigerian-born Henry Mmereole, who runs three pharmacies in Warsaw, foreigners want to settle in Poland because the country is developing quickly, and dynamic individuals can rapidly climb the social ladder. The climate is the main drawback, but you get used to it eventually.

Often, however, economic and family-related considerations are only part of the equation. For more and more would-be immigrants, Poland is a nice and attractive country to live in. When the multi-instrumentalist and co-founder of the cult band Maanam who is now a member of Drum Freaks, Milo Kurtis, tells us of his recent application for Polish citizenship, he highlights the importance of “the atmosphere and the friendly people” —

My aunt and uncle from Greece recently took a walk down Warsaw’s Royal Route and were amazed at the place. Poland should be promoting itself through culture. It has outstanding theatre and sports. It’s mainly these fields that make countries known in the world.

Born in 1951 in Zgorzelec on the Polish-German border into a family of Greek refugees (some 15,000 of whom settled in Poland in the late 1940s and early 1950s), Mr Kurtis decided that as he thought like a Pole and intended to spend the rest of his life here, he might as well apply for citizenship. It was the honest and convenient thing to do, given that he was already part Polish and loved the country. However, he says that he will always remain a Greek: “We are like Jews – it’s the blood that decides, not your birthplace”.

The Vietnam of Europe

Meanwhile, without any publicity at all, large numbers of foreigners have been coming to Poland in search of education or a better life. But only a small fraction of them apply for Polish citizenship. A few thousand applications a year is not much, when you consider that the number of legal and illegal immigrants in Poland has been estimated at between 500,000 and one million. But in fact the influx is only beginning.

Poland has become a destination of choice for Vietnamese. As Karol Hoang, president of the real estate agency Asean Development and owner of a Warsaw-based model agency explains —

Many of our parents’ generation studied here in the 1960s and 1970s, speak Polish, and convey a somewhat idealized image of Poland as a land of milk and honey.

Mr Hoang, whose grandfather served as a diplomat in Warsaw, is just one member of a Vietnamese community that has been estimated at 40,000 to 50,000. In contrast to the largest migrant group in the country, the Ukrainians, who work in agriculture and gardening, as well as construction, babysitting and elderly care, the Vietnamese usually plan on definitively settling in the country. As Houang explains —

The Ukrainians will work for some time, earn some money and return home. The Chinese, if the business doesn’t go well or a crisis hits, will pack up and go elsewhere. But the Vietnamese are here to stay. We’re taking root here, planning ten or twenty years ahead, thinking about the future of our kids, about whether they’ll receive a good education and get a good job at a bank or a corporation.

Mr Hoang, whose wife is Polish and who feels half-Polish himself, has just sealed his 20-year-long relationship with Poland by successfully applying for citizenship.

Young Vietnamese assimilate quickly and often perceive themselves as Polish. In fact, the first generation of immigrants complains that the process has been too rapid, that the young don’t sufficiently cultivate their relationship with their ethnic homeland. But the identity issue is deeper than that. Asians don’t have blue eyes and blond hair: they’d like to be Poles but aren’t always accepted as such.

Poland has come a long way since the late 1990s when football hooligans threw bananas at Nigerian-born Polish striker Emmanuel Olisadebe. In 2010, John Abraham Godson, also born in Nigeria, became Poland’s first ever black member of parliament. For Godson, his fascination with Poland began when a Romanian missionary told him about the distant country. Today he is an integrated local in the city of Łódź, and that is where he wants to live out his days and be buried.

When does the moment arrive when an immigrant develops a predominantly Polish identity? Certainly not when they receive their Polish passport. Okil Khamidov, director of the popular TV series, Świat według Kiepskich, and a Tajik by birth, jokes that in his case it was when he started complaining for no reason. “Oh, I’m Polish”, he thought.