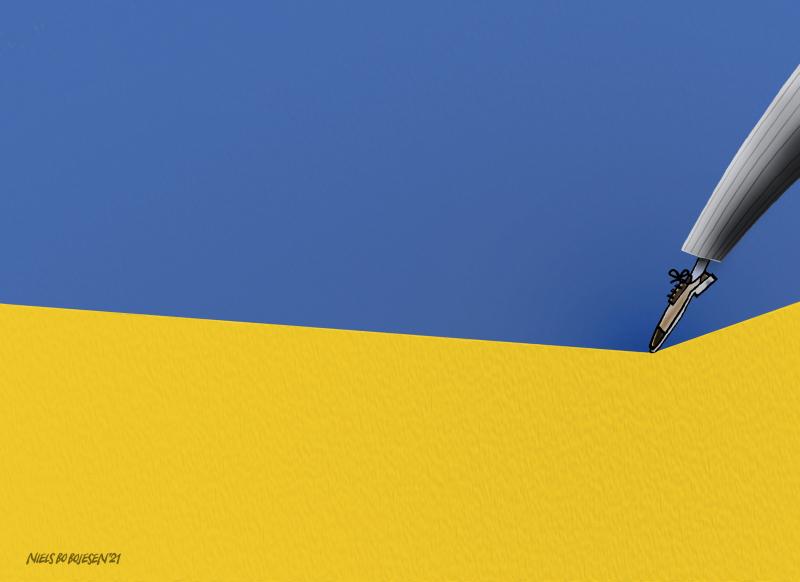 It’s no time to show weakness to the Kremlin

Russia’s meddling policy towards the European Union and its neighbours, and the invasion of Ukraine, show that appeasement and compromise don’t work with Russia’s ruling elite. If not stopped, it will continue to be a threat to peace and security in the region, warns a group of Ukrainian political scientists.

It is difficult to accept the reality of a full-scale war in the heart of Europe in the 21st century. But Russia has waged such a war not only against Ukraine but against the Western democratic world.

If Russia is not stopped, other European countries will be next under threat. Avoiding conflict with Russia could end not only Ukraine's dream of escape from a suffocating imperial embrace. It might also end hopes for a secure and prosperous Europe.

This is what has brought Russia’s transformation under Putin into the fascist regime of the 21st century. It is a fiasco for Western democracy and for a decade of Europe’s eastern policy.

All these years, Russia has been wrecking the EU from within with the help of its "friends" in Europe, using economic bribery, blackmail, and corruption. Anti-Americanism has proved tempting for many in Europe, both on right and left.  Used to living by the 21st century’s standards, Europe has found itself completely unprepared for the political practices of the 19th century. But it would be a mistake to think that one crazed dictator is the only problem here. The war crimes against Ukraine are being committed with the full support of all branches of the Russian government and a large part of Russian society.

The longer Putin's regime in the Kremlin persists, the worse the consequences will be for both Russians themselves and the wider world.

Sanctions adopted against Russia could have helped prevent this war if they had been taken before its attack on Ukraine rather than after. Helping Ukraine to win the war now may prevent the bombing of Poland or another European country, but will not undo the bombs dropped on Mariupol.

It is simply a delusion to believe that Europe is not supposed to be involved or can avoid a confrontation with the Russia. The problem is that the Kremlin believes that it is at war with NATO, not Ukraine. Most Russians have been convinced that fighting in Ukraine means they are at war with the collective West. The bad news for Europeans is that by “the West” the Kremlin means not only the "demonic" United States but also "deceitful and hypocritical" Europe.

The policy of appeasing the aggressor has essentially become one of enabling the aggressor. If Western leaders had dared to stop Russia in 2014 when it occupied Crimea, perhaps in 2022 we would not have this full-scale war on Ukrainian territory.

Why can’t Ukraine stop this war? Because it isn’t Ukraine that started it. Why can’t a direct confrontation with Russia be avoided? Because the logic of the Kremlin’s actions does not depend on what one does, but solely on Putin’s perception of reality. The Kremlin raves that the Russian Federation has already been at war with "the West" for many years.

The Kremlin perceives willingness to compromise as weakness and the result is simply greater demands. Only strong responses are taken seriously by Moscow. Russia retreats when a line is drawn.

NATO's attempts to avoid provoking Russia into further escalation only prove to the Kremlin that it can keep advancing. NATO's refusal to close the sky over Ukraine only brings us closer to a Russian invasion of the Baltic states or attack on a NATO member state.

When waging wars, the Soviet Union spoke of the struggle for peace while launching an operationn - of “brotherly” help. Likewise, troops sent to fight in Ukraine were all but called humanitarian aid by Putin, in the finest tradition of the KGB Soviet school. And although it might seem that his actions are now aimed at destroying Ukraine, Putin will not stop until he has shattered the whole of Europe.

Another mistake is to hope that the situation can be normalized by avoiding a direct conflict with the Kremlin. In 2014, the Western response was too little too late. Now the reaction is stronger, but is that enough to stop the Kremlin from destroying Ukraine today and the rest of Europe tomorrow?

No one in Europe will be safe as long as the current Russian regime exists. The war Russia has started "against the West" will affect everyone.

Some of Putin’s words should be taken at face value. For many years, he has been openly stating that he is at war with the West and that his main opponents are the United States and NATO. It is naive to expect that he would thus settle for just Ukraine.

Several years ago, at one of his meetings with "the people", Putin was asked the question, "Where are the Russian borders?", to which he replied, "Nowhere." This might be taken as a joke, but the "joke" has already taken thousands of lives. It may take millions more if we don't stop it.

Russia's borders exist only where Russia is stopped. Unfortunately, the only language the Kremlin understands now is the language of power. Any attempt to find a compromise will be perceived as weakness and will only provoke further aggression.