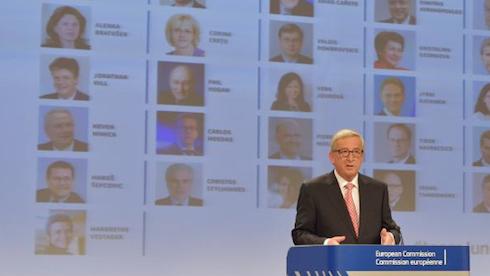 ‘Juncker wants to be in charge’

Jean-Claude Juncker, president-elect of the European Commission, unveiled his team on 10 September, stirring a mix of curiosity and scepticism in the European press.

For De Volkskrant, the Juncker Commission is “politically heavy” with its five former prime ministers, four former deputy prime ministers and a “handful of talented ministers”. This team will be “at least on paper, a counterbalance to the government leaders who are getting the more and more the upper hand in the EU”. The daily calls Juncker’s method “revolutionary”: “He ends after several decades the culture where every Commissioner rules over its own kingdom.”

El País deputy director Lluís Bassets writes that it is undeniably the “Juncker Commission”, with the former Luxembourgish leader appointing many allies. A sign for the Spanish daily that “Juncker wants to be in charge” and that he “will not submit to the power steering of Germany”.

Not only has Juncker personally chosen his commissioners, but the Commission also bears the markings of his political family, writes The Financial Times, which signifies —

that France’s Pierre Moscovici, the lone centre-left politician among the group, could have difficulty shifting Europe’s approach to the economic crisis. Mr Moscovici, a former finance minister under French President François Hollande, won the prize job of economic affairs commissioner, but he will be surrounded in Mr Juncker’s core economic team by politicians with reputations for fiscal discipline. Importantly, Mr Juncker on Wednesday appointed Frans Timmermans, the Dutch foreign minister, as a new “first vice-president” who was described as “the right-hand of the president” and who will ensure the new commission focuses on a handful of priorities – a clear message to [rising euroscepticism(4768706). Mr Timmermans’ government in The Hague has been among the most vocal in keeping powers in national capitals rather than transferring them to Brussels.

The financial daily also notes that Juncker has taken “the unexpected move” of appointing Lord Hill, a Tory in Britain’s House of Lords, to oversee the bloc’s financial services sector, which the paper calls —

a big gamble and an olive branch to David Cameron, the British prime minister, who had aggressively opposed Mr Juncker taking the helm of the EU executive.

The mix spells trouble for American economic news site Quartz, which argues that by naming Moscovici, who “is expected to push for less austerity and more growth-friendly policies”, along with Lord Hill, “an important compromise for the powerful London financial lobby”, [[“the EU puts the foxes in charge of the henhouse”]].

In Germany, Werner Mussler writes in the Frankfurter Allgemeine Zeitung that Junker has to “face the question of why Moscovici had received a – for his country – crucial portfolio, whereas the German commissioner Günther Oettinger received an important though vaguely defined portfolio (‘digital economy and society’)”.

In Zeit Online, Ludwig Greven argues the appointments are an “affront against Merkel”: not only did Oettinger not receive the hoped-for trade portfolio, but Moscovici was put in charge of economic and financial affairs, taxation and customs —

[German Chancellor] Angela Merkel wanted to prevent this, because she considers the socialist [Moscovici] partly responsible for France’s high debt level and does not trust him to enforce the stability pact in France or other indebted countries such as Italy. Juncker ignored those concerns and followed the wish of the French President François Hollande.

For French daily Le Monde, the task ahead of Juncker is “immense, since the institution that is supposed to embody the European ideal has been weaked by ten years of presidency of the Portuguese commissioner José Manuel Barroso.”

The Commission has been shapeless ever since it has had 28 commissioners, one per member state. It is unable to agree on a truly European direction. It has not taken a sole initiative during the euro crisis, leaving heads of state and government […] alone with the European Central Bank to decide how to save the euro.

According to the paper, the new president of the Commission “has three main missions”. The first is the “consolidation of the euro”, in which he must mediate “between the sick and the healthy, between France and Germany,” to “prove he can renew the economy without giving up on measures to clean up public finances” and to “force states to carry out structural reforms and ensure investment”. Secondly, Juncker must “keep the United Kingdom in Europe”, because “its exit would announce to the world the failure of the European project.” Finally, the new commissioner must “establish a common immigration policy. Animosity towards the EU often acts as a screen to hide rejection of what is widely perceived as uncontrolled immigration.”

The former Luxembourgish prime minister “is not there to be the general secretary” of the 28 member states, concludes Le Monde: “it must know how to incarnate what they want to do in common. No more, but no less.”