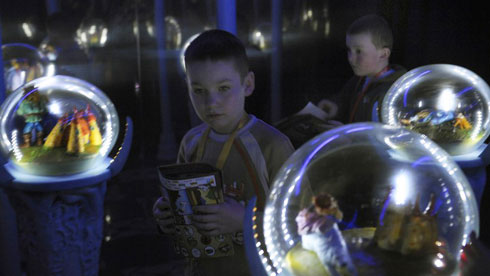 Kids are so last century

Poles are staying in education longer and putting off having children – sometimes for too long. The country already has one of the lowest fertility rates in the world and if current trends continue, it may well top the global childlessness ranking in the not too distant future, writes a Polityka commentator.

Children in the European Fairy Tales Centre in Pacanów, 200km from Warsaw

If one in three women never became a mother, Poland would have the lowest maternity rate in the world, lower than Japan, the US or Great Britain, where roughly one in four women never give birth.

Researchers believe that longer education is the key factor behind the globally declining fertility rate. And Poland has been undergoing a boom in educational services: the education rate rose from 13 per cent in 1991 to nearly 54 per cent in 2011. Of the 2.5 million Polish youths aged 18-12, as many as 1.9 million are students. Add the highly liberal labour market conditions, junk contracts, high risk of unemployment among young people and big expectations, and this his means that women are having their first baby later in life – a whole two years later than fifteen years ago. The percentage of women who delay having children until they are 30 has risen twice during the same period.

But changes in the genetic code have not followed as quickly as the cultural change. Bodies are not adapted to entering maternity in the fourth decade of life.

Doctors estimate that as many as one in five couples in Poland have a problem getting pregnant. Medicine can help but in vitro fertilization (IVF), the most reliable last-resort method, had until now been available only to the affluent as the costs were high.

Circumventing parliament, the government has recently issued a ruling, that opens the way for 30,000 IVF procedures to be financed with public money. First, however, in keeping with international law, Poland has to pass a bioethics bill and since the Church is opposed to supported fertilization, the risk remains that infertile couples will be left out in the cold.

Single women holding a tertiary degree have trouble finding the right partner. The Famwell research project, carried out by the Warsaw School of Economics’ Institute of Demography, shows that as many as one in two childless women born in the 1960s have never had a serious relationship which lasted long enough to consider children.

This is, first and foremost, because a Polish woman with an university degree will not marry a man without a degree. Statistics show such marriages are almost nonexistent. The other reason, especially outside of big cities, is that the potential grooms are stuck between the cultures of past and present.

As in the days of yore, they feel exempt from household chores, but today they also no longer feel obliged to fulfil their traditional function, that is, providing for the family materially.

Ever more independent, educated and more mobile (young women were the latest – and largest – wave of Polish post EU-accession labour emigration), graduate single women do not want a partner they will have to be carrying on their back for the rest of their lives.

They would even accept the traditional scenario of staying at home if the man brought home a decent salary. But well-paid and easily available jobs are in scarce supply in Poland today, so they are caught in a tricky bind.

Big-city single women, on the other hand, complain about the oversupply of male partners keen to avoid long-term relationships. This is partly due to a surprisingly high percentage of youths who have a psychological problem with being close. This is a matter of brain make-up: the lack of childhood-developed patterns suggesting that closeness and intimacy are good things; the dominant attitude perceives intimacy as a dangerous thing.

Young people are increasingly unable to create lasting relationships. In this context, internet researchers point out the effect that dating portals or the web culture in general have had on both sexes, as it has never been easier to sail from one encounter to another without the chance of entering in a long-term relationship.

Demographers estimate that some 7 million Poles aged 25-45 are single. As many as four in ten of those aged 25-35 live with their parents, maintaining at best a loose relationship with someone, OECD research shows.

At the same time, women themselves have been less and less keen to enter in relationships, for the same reasons as stated above and because they are the daughters of the “mother-Poles”, who worked themselves to exhaustion, slogging away at two jobs – the professional one and the household one.

For women born in the 1950s, marrying meant an automatic decline in self-esteem and self-integrity. Their daughters do not want to follow the same path.

Anthropologists add, that the importance of having children has fundamentally altered in people’s minds.

Wanting but not being able to have a child remains one of the hardest experiences in life, resulting in profound, legitimate mourning, therapists note, but this is not true for everyone.

Contemporary science says there is no longer such thing as a maternal instinct. Or, at least, that it does not manifest itself in every woman, which unfortunately includes also mothers.

Some simply do not accept themselves in the role and the price for unwanted parenthood is paid by the child. Non-parenthood is thus as inherently a part of civilisational development as, say, life-span extension.

But the need and desire to be a parent can be immense. Regardless of their mindset, most people still need to have babies, perceiving them as a fundamental love-related experience. An experience that gives meaning and completeness to life.

It is, in fact, the one ally that the birth rate has.