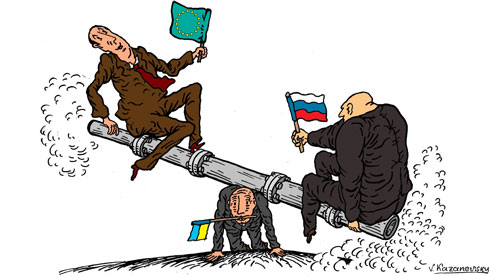 Kiev at a crossroads

Moscow is piling pressure on Kiev to prevent Ukraine from signing an association agreement with the EU, which would send a clear message that the country wants to exit Russia’s sphere of influence. But how far is Ukraine really ready to go?

“Association with the European Union will contribute to the formation of Ukraine as a modern European state”, President Viktor Yanukovych said in a speech delivered on the 22nd anniversary of the country’s independence on August 24.

And while he hastened to add that good relations with Russia were vital too, the very sequence in which he mentioned the issues showed clearly which way the wind is blowing in Kiev today. With a population of 44 million and a territory that makes it the largest country entirely in Europe, Ukraine is facing a historic choice between an association agreement with Brussels and a customs treaty with Moscow. As the proposed documents are mutually exclusive, Kiev has to make a strategic decision. Failure to sign the deal negotiated with the EU before the year-end will freeze the integration process for several years, or even suspend it indefinitely. In practical terms it will mean that Ukraine has chosen its eastern neighbour for a strategic partner.

No deal without reforms

The EU is prepared to sign an association deal but on three conditions: that Ukraine improves its public prosecution regulations, adopts an electoral code consistent with Council of Europe recommendations, and solves the problem of the selective enforcement of law. Meeting all three is nothing Mr Yanukovych cannot do – the first two can be quickly pushed through the Rada, dominated as it is by his own Party of Regions, and the third one will be considered fulfilled when ex-PM Yulia Tymoshenko is freed from prison, which is not impossible in view of the release earlier this year of her close associate, Yuriy Lutsenko.

Of course, the Ukrainian leader is unpredictable and can change his mind at any moment. But today he appears determined to finalise the EU deal this autumn.

“Unless he changes his mind, the association agreement should be signed in November”, Polska the Times was told by MEP Paweł Zalewski (Civic Platform) who is an expert on Ukrainian affairs. He stressed, however, that Russia will try to undermine the process.

“Moscow will be trying to create an atmosphere of tension and confrontation, hoping that even if Ukraine manages to keep its cool, the EU will crack under pressure”, said MEP Paweł Kowal (Poland Comes First, right) who led the European Parliament’s monitoring mission to Ukraine during the 2012 general elections.

Moscow has already embarked on a drive to “soften up” Ukraine. The two countries’ cultural and civilisational community was emphasised by Russian president Vladimir Putin who visited Kiev to attend celebrations of the 1025th anniversary of the baptism of Kievan Rus. The visit, however, did not have the expected impact so Moscow replaced the carrot with a stick, starting a trade war by blocking the import of certain Ukrainian goods.

The customs crisis was relatively quickly averted, notably with help from the EU, but many experts believe it was only the beginning. Pavel Nuss, leader of the Civic Committee for Salvation of Ukraine, has recently suggested that Russia will start attempts to destabilise Ukraine as early as in September, using its agents of influence to incite Ukrainians against the push towards Europe. [[“There is a high probability that the conflict will escalate into war”]], wrote Nuss, evoking Russia’s 2008 invasion of Georgia, a few months after the Bucharest Summit pledged that Georgia and Ukraine would eventually be allowed to join the Western military alliance. Even if the Kremlin does not go so far this time, major provocations, such as the cutting off of gas supplies, cannot be ruled out. In fact, Russia has already used the “gas gun” against Ukraine twice: in 2006 and 2009.

Another possible scenario is that Russia will try to ensure that 2015 presidential elections in Ukraine are won by a candidate of its choosing. “The next president could then revoke the association process”, suggested MEP Paweł Zalewski.

“Ukraine is not the only country feeling the heat. Russia has also been pressing Armenia and Moldova to forget about seeking this or another kind of arrangement with Brussels”, said EEP (Civic Platform) MEP Jacek Saryusz-Wolski, the vice-president of Euronest, the parliamentary component of the proposed Eastern Partnership, consisting of members of the European Parliament and parliaments of Eastern European countries.

It follows that the final months leading up to the Eastern Partnership summit in November will likely be marked by heated diplomatic conflict. Poland will be one of its main theatres because it has a greater interest in the successful completion of the EU-Ukraine deal than any other state in the EU. The Russians know this too so it is not impossible that they will try to weaken the Polish government’s political position ahead of the final talks. The Kremlin has proved its adroitness in playing Polish politicians against each other on numerous occasions, most recently in April when a Polish minister was sacked over a gas memorandum signed with Gazprom.

No sign of thaw in cold war with Russia

This month’s week-long punitive customs checks, introduced on August 14 by Russia against imports of Ukrainian goods and which triggered huge delays at road and rail borders, will not persuade Kiev to abandon its hopes of getting closer to Europe, reports the Ukrainian Den newspaper.

The blockade, which aimed to dissuade Ukraine from signing an association agreement with the EU and bend towards a Customs Union with Russia, sparked a flurry of complaints, including one from the European Commission, which condemned the tactics as “unacceptable”.

Viacheslav Yutkin, deputy chairman of the Prominvestbank board of directors, tells Den —

I don’t think that such actions will prompt Ukraine in any way to make a positive decision about Customs Union membership. On the contrary, there can be a reverse reaction that will harm Russia. And I think the majority of Russians share this viewpoint because this trade conflict shows wrong methods and is assuming a wrong shape. It is assuming the signs of nothing but a ‘war’.

For the Kiev-based newspaper, Russia’s intimidation is bound to fail because if Ukraine turns its back on the EU –

this would provoke a political crisis in this country and rob [President Viktor] Yanukovych of any chances in the presidential elections.

Meanwhile, the newspaper reports that Russian media anticipates that if the conflict continues,

the Russian migration service may resort to a mass-scale eviction of Ukrainian guest workers.