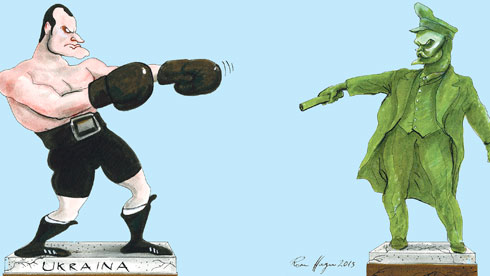 Klitschko, a fighter coached by Merkel

Since the start of the pro-EU protests against the Ukrainian government, former boxer Vitali Klitschko has emerged as one of the main challengers to President Viktor Yanukovytch. Groomed by to the German chancellor’s Christian-Democrats, he could be soon backed by more European leaders.

By Thursday of the week before last, it was abundantly clear that any friendship between German Chancellor Angela Merkel and Ukrainian President Viktor Yanukovych was finished. They were gathered at a festive dinner in the former palace of the Grand Duke of Lithuania, with the city of Vilnius decked out for Christmas, together with leaders from the European Union and Eastern European countries. The truffled pastry hadn't been served yet when the Ukrainian president launched into a rambling monologue about his country's difficult relationship with Europe, on the one hand, and with Russia, on the other. But at some point Merkel interrupted Yanukovych and brusquely informed him that he might as well stop talking. "You're not going to sign anyway," she said bluntly. The Armenian president, who was sitting next to Merkel, looked up in surprise.

"The door remains open for Ukraine," Merkel repeatedly emphasised after the debacle, noting that the Europeans were still willing to talk. And before the next round begins, the chancellor plans to bring a new player into the game: Vitali Klitschko. The tall heavyweight-boxing champion is to be groomed as the pro-European opponent of pro-Russian President Yanukovych, and the hope is that he will be the one to sign a pro-EU treaty, which they still believe will materialise.

While "regime change" is too strong a term for what Germany is seeking, it's not entirely off base. Merkel's centre-right Christian Democratic Union (CDU) and the European People's Party (EPP), a family of European conservative parties, have chosen Klitschko as their de facto representative in Ukraine. [[His job is to unite and lead the opposition - on the street, in parliament and, finally, in the 2015 presidential election]]. "Klitschko is our man," say senior EPP politicians, "he has a clear European agenda." And Merkel still has a score to settle with Putin.

Much of the work happens behind the scenes. Klitschko's party, the Ukrainian Democratic Alliance for Reform (UDAR), formed in 2010, became an observer member of the EPP recently. EPP offices in Brussels and Budapest are training UDAR personnel for parliamentary work and providing support in the development of a nationwide party structure. The Konrad Adenauer Foundation, which is closely aligned with the CDU, also plays an important role, and Klitschko has expressly asked Merkel's advisors for help from the foundation.

But Klitschko himself remains the focal point of the effort. He has been meeting with Ronald Pofalla, Merkel's chief of staff, who has maintained ties to members of the opposition in Eastern Europe for years, especially in authoritarian-ruled Belarus.

He has given Klitschko a number of tips, and the heavyweight boxer and political novice has asked Pofalla for advice. For instance, Klitschko wants to know how to respond to rumours about his alleged "affairs with women" that the Ukrainian government is spreading to spoil his chances to be a viable political leader in the country.

Klitschko can also depend on discreet help from Pofalla and the German government when it comes to the 2015 presidential election. His candidacy is currently blocked by a law, presumably written specifically with him in mind, whereby a citizen with a residence permit in other countries is not considered a resident of Ukraine. This prevents Klitschko from proving that he lived in Ukraine for 10 years prior to the election, which is a requirement for a candidacy under the country's constitution. But he can count on Merkel to appeal to President Yanukovych to ensure that the law will not derail Klitschko's candidacy.

Into the big leagues

To that end, [[the professional boxer will have to be groomed as a serious politician, both in Ukraine and abroad, which is precisely what is happening]].

Klitschko attended a preliminary meeting of conservative European leaders in Vilnius about two weeks ago, spending long hours in conversation with key members of the European Parliament. But he did not meet directly with Merkel.

However, Merkel will attend the EPP preliminary meeting before the next EU summit in mid-December, and the current plan is to invite Klitschko again. This time official photo ops with the European leaders are on the agenda, as is a meeting with the chancellor. It would significantly boost Klitschko's political credentials and signify an important commitment for Merkel.

But can Klitschko unite the notoriously divided opposition, which mainly consists of his UDAR Party, the Fatherland Party of imprisoned former Prime Minister Yulia Tymoshenko and the right-wing nationalist Freedom Party? Klitschko's supporters in the EPP hope that by the 2015 presidential election, the opposition will be able to stand behind a joint candidate to run against Yanukovych - and win. Then Merkel will have reached her interim goal of pro-European leadership in Ukraine, and the real second match could begin: the effort to restructure the EU's relations with Eastern Europe - a match pitting the EU against Putin.