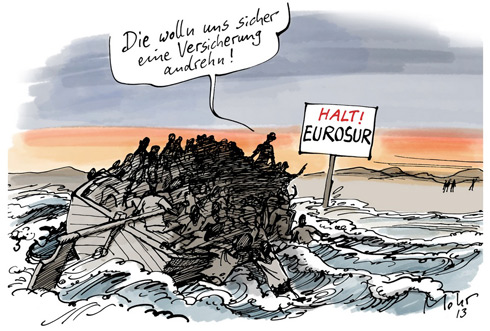 Gee, somebody sure wants to flog us insurance!

On December 2, the European Union launched a new external border monitoring system called Eurosur. The project is the latest effort to boost the fight against illegal immigration and prevent further shipwrecks off Europe’s coast, such as the Lampedusa disaster in Italian waters on October 3.

Two days later, Home Affairs Commissioner Cecilia Malmström unveiled a new plan to prevent such tragedies, including increased border surveillance, greater cooperation between member states and a new crackdown on immigrant smuggling. However, procedures for obtaining visas for genuine refugees will be streamlined. These measures will be submitted to the European Council for approval on December 20.