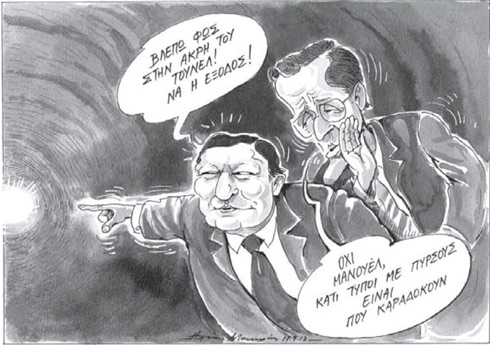 Light at the end of the tunnel

I see a light at the end of the tunnel! It's the way out!

No, Manuel. It's some guys loitering with flaming torches

Following a September 17 meeting with the Greek Prime Minister in Brussels, the European Commission President declared that "the sacrifices of the Greek people are producing tangible results" and that "there is light at the end of tunnel."

During the following night, a member of the Golden Dawn party mortally wounded rapper and anti-fascist activist Pavlos Fryssas, age 34, outside a café in Athens. To date it is the most serious crime to be committed by a member of the far right party, which likes to hold torchlight demonstrations.