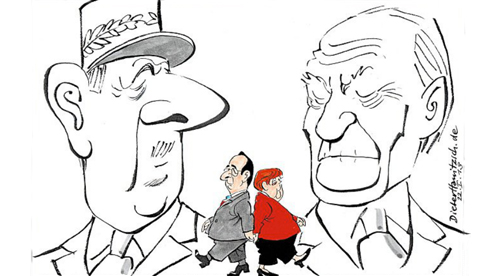 Paris and Berlin may be celebrating the anniversary of the Elysée Treaty, which founded their reconciliation, but their marriage has hit the rocks. The French are making faces at the economic success of the Germans, who aren’t holding back when it comes to pointing out the weaknesses of their neighbours. But we have to keep the love alive.

The New Year’s Eve addresses reached us a little late. Not President Hollande’s, but Angela Merkel’s. It was an almost ghostly apparition. The Chancellor had a touch of the imperial about her. For Angela Merkel, her speech was a walk in the park. The address, though, did deliver some of the Chancellor’s gloomy projections for the year ahead: “The crisis is far from over.”

This is not what we have seen during the past year. We have seen a German Chancellor ruling over a pacified Germany, nine months away from a general election. Merkel was radiant on the television screen, dressed in grey satin, rising up from her perch in the Chancellery, the Reichstag building hovering in the background – the incarnation of German parliamentary democracy.

Her tone was calm, with a slight smile. Some people are criticising this physicist, daughter of a comfortable Lutheran pastor in East Germany, of preferring the hard sciences to the humanities, of lacking a historical consciousness at a time when the question of Europe hangs heavy in the air.

Delving into the past

Angela Merkel is working hard to follow the fathers of the Federal Republic into the history books. In her New Year’s address she delved back 50 years: she referred to Walter Bruch, German inventor of the PAL colour television system, which finished off our national Secam system. She recalled Kennedy proclaiming “Ich bin ein Berliner” in front of the Berlin Wall, and she paid tribute to Charles de Gaulle and Konrad Adenauer, who pledged themselves to Franco-German reconciliation.

Before seeking a third term, Merkel wants to carve out for herself a stature worthy of her great predecessors. At a meeting in November 2012, before heading to Norway to collect the Nobel Peace Prize for the European Union, President François Hollande (“Mr. Normal”) pouted, saying they were off to collect a prize won by the heroes of yesterday, Schuman, Monnet, and Adenauer. “But we must be heroes too,” retorted Angela Merkel, who all the same had badly mishandled the euro crisis in its infancy by refusing to exclude a bankruptcy among the member states of the monetary union.

A proper hero must suffer, and Angela Merkel is still demanding sweat and tears. In her New Year’s wishes she failed to mention the efforts of the Greeks and other peoples of Latin Europe hit by the euro crisis. But, before wishing her compatriots “God’s blessing,” she quoted the Greek philosopher Democritus (460-370 BC): “Courage is the beginning of an action, but chance is the master of the end.”

To listen to their Chancellor, though, the Germans are close to happiness. While France is tearing itself apart, yesterday over Nicolas Sarkozy, and today over the 75 per cent-tax fugitives and gay marriage, the German Chancellor embodies a united nation.

On December 31, Angela Merkel told a story. A schoolboy from Heidelberg, she said, had been persuaded by his friends on the football team not to drop out of school: in Germany, the success of an individual is success for the whole group. And what a success! Unemployment is at its lowest level since reunification, and was halved under the mandate of Angela Merkel; the country has already created 416,000 jobs in 2012. Many Germans have never not had a job.

The same evening, François Hollande tried to convince his countrymen that unemployment, which had risen 19 months in a row, was finally reducing at year’s end. But the happiness Angela Merkel speaks of is deserved. To keep it, we must persevere. Without waiting for the Epiphany, which marks the start of the German political season, Germany’s Finance Minister, Wolfgang Schäuble, has announced new savings measures.

The French and German Ministries of Foreign Affairs are organising a superb hypocrites’ ball in Berlin on January 21 and 22, the 50th anniversary of the Elysée Treaty. The populations of the two countries are entitled to the usual refrains: the Franco-German ministerial council, and speeches from Angela Merkel and François Hollande to the Reichstag. The highlight of the festivities will be a concert at the Berlin Philharmonic. And that’s all.

The media coverage of the event will seek to reveal a Franco-German policy initiative, but the two leaders have not put forward anything major. On the contrary, there will be some chomping at the bit on both sides of the Rhine: the Germans despise the French economic laggards, while when it comes to German power the French are yelling loud and clear.

Germans are accused of wanting to kill off Peugeot, of failing to recognise French superiority in the space industries, in weather forecasting, and so on.

Angela Merkel has grand airs, Germany has a touch of the imperialist power about it, and France is on the ominous road to Germanophobia.

“Arguments make friends.” The real strength of the Berlin-Paris relationship is derived from their eternal disputes, says Die Welt am Sonntag.

Certainly, remarks the Sunday edition of Die Welt, there is a lot separating the French and the Germans. The former view their “twosome” as the union of the bare-chested and beautiful Marianne, and her undying thirst for liberty, with the mustachioed, boot-sporting Bismarck, with his gift for power. The latter prefer the more technical metaphor of the “Franco-German motor”. But differences like these can be advantageous:

Unity alone cannot guarantee progress for Europe. Adenauer and De Gaulle were always bickering about relations with America and European autonomy. Kohl and Mitterrand argued about reunification and the euro. There have always been tensions about all kinds of things. But in the end there was always a compromise to enable Europe to move forward.

According to WamS, this was the spirit of the Elysee Treaty, which aimed to have a maximum number of citizens versed in the language of the other country and permanent contacts at every level.

This is how Europe developed into a unique network where no one has to give up their identity. And this also explains why France and Germany still have the role of leaders in Europe. They do not form an exclusive bilateral association. Rather they are exemplary in the manner in which they take opposing sides on major issues in the union — and thus draw in the other countries.