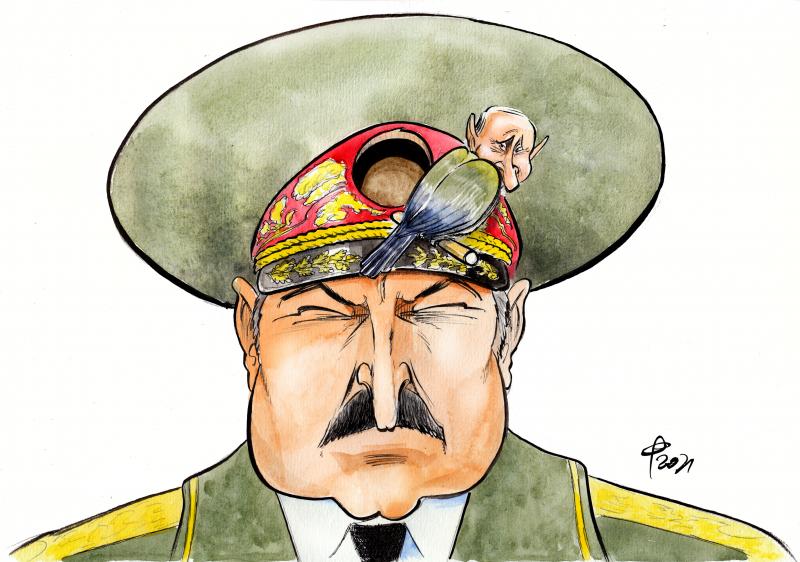 To avoid the displeasure of their Russian ally, the Minsk regime has outlawed independent media and placed its propaganda under the Kremlin’s direct control, reports the dissident news site Reform. A sudden rise in Belarusian support for joining Russia’s war against Ukraine is already evident.

The latest polls on Belarusians’ attitudes to the war in Ukraine are worrying, but not surprising. When our country’s independent media has been effectively destroyed, the results could hardly be any different.

The figures, which were presented early October by sociologist Andrei Vardomatsky at a recent congress of Belarusian researchers in Kaunas (Lithuania), are indeed depressing: respectively, 21.1 percent and 20.3 percent of respondents totally or somewhat approve of Russia’s recent actions. Thus, in September of this year 41.3 percent of Belarusians took the side of the Kremlin in its war of aggression against its neighbour.

More : Why Belarus is erasing the memory of WWII Polish resistance

In March this year, 61.8 percent of respondents were against the use of Belarusian territory and military infrastructure for Russian military operations. In September, that figure dropped to 51.4 percent. Similarly, in May 2022 50.3 percent of respondents sympathised with Ukraine, while in September that figure dropped to just 33.9 percent. In September’s poll, 32 percent sympathised with Russia, compared to 21.1 percent in May.

While in March and May 2022 the numbers of respondents with a totally or somewhat negative attitude towards Belarusian military participation in the war were 85 and 85.1 percent respectively, in September just 80.9 percent declared their opposition. Meanwhile, 9.5 percent looked favourably upon the prospect of Belarusian military involvement in the war.

Clearly, our society’s support for Ukraine has declined significantly over the summer, and Belarusians are becoming more and more doubtful about which side to take in the conflict.

The reasons behind this shift are obvious: the Belarusian media is occupied by Russia. The "Russian world" penetrates the minds of Belarusians through television and state-sponsored print media. The regime's propaganda has long since ceased to be pro-Belarusian and fervently repeats the Kremlin's narrative.

Belarusian society has experienced intense pressure from this propaganda for over six months. With no other sources of information, many Belarusians simply trust what their screens tell them. Finding it hard to believe that their media would blatantly lie to them, little by little they begin to doubt. They are unaware that what other parts of the world call the media has long ago ceased to exist in our country. It’s not mass media prodding the minds of Belarusian citizens but rather a powerful propaganda machine, managed mostly by Moscow, not Minsk.

The Belarusian change of heart is the result of a deep cleansing of the information sector, carried out by Belarusian authorities after 2020. Dozens of independent media outlets have been crushed and expelled from the country. Thirty Belarusian journalists are now behind bars. Independent sources are blocked and difficult to access.

Under such conditions, it is much more difficult for us to convey an alternative viewpoint to the public. And in society at large, some minds are truly melting under the pressure of propaganda.

In society at large, some minds are truly melting under the pressure of propaganda

Yes, the suppression of independent media was what Belarusian authorities were hoping to achieve. Under the pretext of fighting "sedition", they decided to attack the national media sector. However, they never managed to put anything decent in its place, an…