On 11 March, as Eurozone leaders gather in Brussels to find a way out of economic crisis, only one woman, it seems, can prevent the EU splitting in two competing blocs. But is Angela Merkel up to the task? 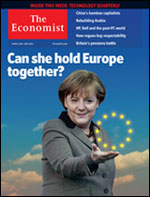 Germany's chancellor, Angela Merkel, has the future of Europe in her hands. As the biggest creditor country, Germany holds the key to resolving the euro zone’s sovereign-debt crisis. As the continent’s economic giant, it is the biggest determinant of the European Union’s direction. And right now Europe may be embarking on a path that could tilt the union away from economic liberalism, risking a split and, ultimately, even a British exit.

Mrs Merkel seems to be sleepwalking into this danger. For all her sound instincts and skills as a politician, she appears to have no vision for the EU. She has been woefully slow to get to grips with the euro zone’s troubles, largely because German voters do not want to bail out weak countries such as Greece, Ireland and potentially Portugal. And, in her efforts to assure her countrymen that she is imposing Teutonic discipline on the profligate peripherals, she is allowing the euro zone’s role in forming the EU’s economic policies to be greatly enlarged.

Two meetings this week illustrate this worrying development. A summit of 27 EU heads of government will be followed by a euro-zone summit that omits ten of them (see Charlemagne). This might seem an arcane bit of Brussels procedure. Indeed, the British, normally the most suspicious of euro-integration, are pretending that it does not matter. But other “out” countries are up in arms. Historians may come to see this as the moment when the EU split into a dominant, corporatist euro area and a smaller, more liberal outer zone. Mrs Merkel is clever enough to realise this and dislike it, but she has not been brave enough to stop it.

The fear that the single currency could divide Europe has a long history, going back at least to the 1992 Maastricht treaty: and Germany has played a crucial role in keeping Europe together. In the 1990s it adamantly opposed a French scheme for an “economic government” as a counterweight to the European Central Bank, for fear of compromising the ECB’s independence. Before the euro came into being in 1999 the then British chancellor, Gordon Brown, resisted the establishment of a “euro group” of finance ministers that excluded him. His French colleague, Dominique Strauss-Kahn, retorted that in a marriage one did not invite strangers into the bedroom. Read full article in The Economist...

We must rally round Angela Merkel, Respekt assures us. Journalist Kateřina Šafaříková argues in the Czech weekly that the competitiveness pact proposed by the German chancellor and Nicolas Sarkozy – which the Czech government will not support – constitutes “the embryo of a European economic government”.

The message out of Brussels is clear: “Let us admit that we Europeans have succumbed to the illusion that we can become richer without painful changes.” What’s more, Respekt notes, the financial markets are there to remind us that it’s entirely possible that a rich western country can go broke.

Certainly, “the Franco-German proposal is likely to be diluted in the sea of words 'change' and 'compromise'. It risks becoming a new strategy just as toothless as other former 'action projects' wheeled in to help the Union become the best-striped economic tiger in the world.” But “in the circus of inertia that is European politics, Merkel at least is trying to do something. To avoid a “strategic blunder”, the Czech Republic should back Germany because a), “nothing is being risked,” and b), “it has no better offers that would be welcomed in Berlin."