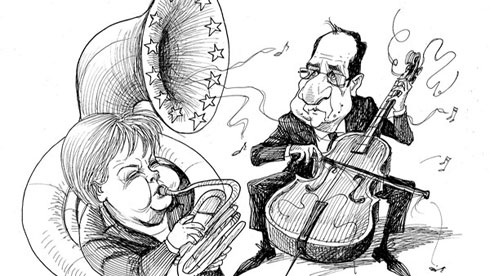 German Chancellor Angela Merkel and French President François Hollande want to install a government for the Eurozone. This could change the EU's structure, according to the press in both countries, but only if the leaders' understanding is sustainable.

Angela Merkel and François Hollande have made up. The "Franco-German contribution," announced on May 30, shows that the German Chancellor now supports the French President's proposals concerning the governance of the Eurozone. French financial daily Les Echos notes that –

This is the first time that Angela Merkel is clearly adopting the French position that political cooperation is necessary to better ensure economic convergence.

In a leader article, French daily Le Monde explains some of the measures proposed –

The Eurozone will acquire a full-time president responsible for coordinating budget and social policies for the 17 members of the European Monetary Union. This is a step towards greater integration of the Eurozone. This will provide the "second leg", dear to [former EU Commission President] Jacques Delors. But each country has an ulterior motive. For Germany, this change must favour structural reforms aimed at improving European competitively. For France, the Eurozone government must act as a counterweight to the European Central Bank (ECB).

Reaction in the German press was mixed. Spiegel Online notes that the French President is now "getting all cosy" with the German Chancellor. The web site of the weekly magazine, however, remains sceptical that the "turning point" is genuine, even if Hollande is "making efforts to establish a Franco-German entente". For business daily Handelsblatt, Angela Merkel and François Hollande's wish to put in place a full-time president and an independent budget for the Eurozone gives the impression of "the Eurozone seceding in secret from the rest of the EU"

The biggest scoop is that a commission specific to the Eurozone will be established within the European Parliament and it will be responsible for democratically monitoring the new structures of the monetary union. On the whole, the Eurozone is taking a giant step towards cutting the umbilical cord with the EU. British Prime Minister, David Cameron, who tried as hard as he could to avoid such a change, probably would describe this Thursday as a Black Thursday.

On the European stage, he swears he has the will to implement reforms and budgetary rigour but once back home, he will not tolerate the advice of the European Commission. In the long term, this will not work. Hollande's European offensive will only be crowned with success once he becomes a reliable partner.