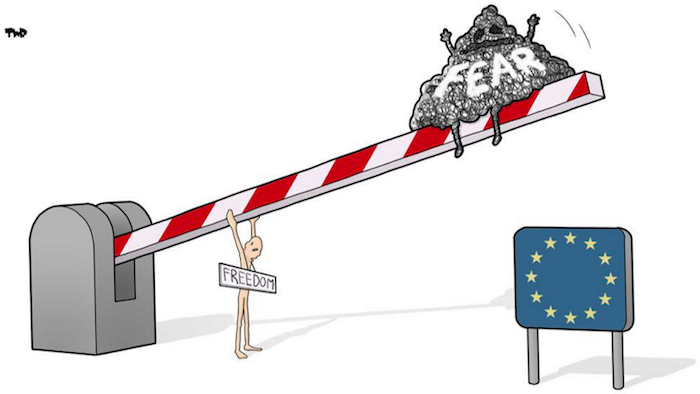 The promise for more security in the wake of the latest terrorist attacks led European countries to take individual action against civil liberties and basic freedoms, while citizens ask for a common European approach and to safeguard Europe's core values.

Albert Einstein is widely credited with saying: ‘The definition of insanity is doing the same thing over and over again, but expecting different results’.
This, indeed, is how it feels shortly after the tragic events that took place in Brussels at the end of last month. Similar to the reaction of European decision-makers in the wake of the devastating terrorist attacks in Paris in November 2015, every policy move is now a new promise for more security.

New borders and divisions in Europe have emerged, and a more hands-on approach to citizens’ personal data is envisaged. Excessive checks and long queues at the borders are an everyday reality. The Directive on the Passenger Name Record (PNR) has regained its momentum and secured the necessary votes after having been rejected twice by the European Parliament on grounds of lack of proportionality between the proposed security measures and the citizens’ rights.

Eurosceptic politicians are using this situation in an opportunistic manner by initiating referendums and promising a safer life to their citizens through the prospect of leaving the European Union. A thorough impact assessment of the proposed patchwork measures, of the promises to society, or of the fundamental rights and freedoms is largely missing.

Strangely enough however, the déjà vu feeling experienced by European citizens who witness their decision-makers recycling the same populist measures while promising a different outcome may not be appreciated. It seems as though Europeans share a different view of the situation and decision-makers are missing the point once again.

A recent survey of the Bertelsmann Stiftung on Border protection and Freedom of Movement (January, 2016) reveals that 79% percent of Europeans consider freedom of movement to be of great importance, and believe it should be defended at all costs. The fact that this is the most cherished right of European citizens is not any news, and the Flash Eurobarometer on EU citizenship (October 2015) reconfirms this by showing that 71% of Europeans believe that free movement of people within the EU brings economic benefit to their country (4 percentage points higher than in 2012).

The restoration of borders and the shrinking civic rights and liberties against increased security is not what Europeans want. Moreover, those who have lived through communist regimes at the other side of the iron curtain know well that such a promise never delivers positive effects, but rather offers great potential to result in “insanity”. According to the Bertelsmann Stiftung survey, the majority of Europeans think policy makers should be defending the rights of European citizens by devising a common European approach to the current crises.

This is particularly the case with regard to the migration crisis, as shown by a survey conducted by the European Parliament in September 2015, and others. In order to create such a common European approach, European decision-makers should ensure the rule of law by effectively implementing the tools that they already have at their disposal and by efficiently carrying out actions for which they have been mandated by European citizens.

Sharing information is a crucial part of effective and coordinated border control and law enforcement. The Schengen Information System (SIS) plays a central role as a platform for exchanging information in order to trace terrorist suspects and conveyances used for terrorism and serious crime purposes.

A recent report by the European Commission identifies serious gaps and shortcomings in the implementation of the Schengen acquis. These include a lack of relevant national legislation and procedures in some founding Member States of the EU, which hampers their ability to process alerts and to take advantage of the existing security framework.

As surprising as such a finding could be, it clearly shows the need for urgent improvement of both national level capacity and international cooperation in the area of freedom, security and justice. Until Member States do their homework properly and prove that the effective use of the instruments already in place is not enough for addressing current challenges, the adoption of new security-related measures at the expense of fundamental rights and freedoms should not be even discussed.

Moreover, it is very difficult for citizens to understand the reasoning behind some of the proposed “solutions” to the problems. The fact that the Belgian police are unable to find a convicted criminal in violation of parole when coming back from Syria somehow leads to the prospect of sharing the personal data of everyone boarding a plane.

Simply because it took the police four months to upload the address of a known safe house of the most wanted terrorist in Europe after the Paris attacks to a national database, free movement and civic rights are scrapped. One cannot help but wonder if it is really sane to introduce new measures if the existing ones are not even properly enforced.

Transforming exceptional rules of limiting free movement into a general rule is against both the will of European citizens and the mandate given by them to European decision-makers through the Treaties. Moreover, in terms of values and with regard to the future of Europe as an area of prosperity, freedom, security and justice, it is the ultimate recipe for disaster.