Aid to Ireland and Spain 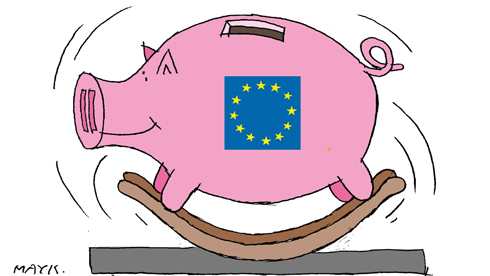 Aid to Ireland and Spain

‘Music to the ears of Angela Merkel’

The Eurogroup confirmed on November 14 that Ireland will exit the bailout programme on December 15 and that the assistance programme for Spanish banks will end in January. Good news that needs long-term confirmation, writes the European press.

Ireland, the first country due to leave the EU-IMF-ECB’s three year supervision programme, announced that it had chosen not to request access to an EU credit line of up to €10bn when it departs the bailout programme. Prime Minister Enda Kenny describes the move as a “clean exit”.

“Coalition to press on with reform agenda to ensure market backing”, reports the Irish Times, before speculating that the decision not to utilise any EU credit facility was mostly due to German reluctance at the idea. An editorial in the daily adds –

Critically, however, the markets can be reassured that the policies and disciplines which have got the country to the point of bailout exit will not be relaxed. December 15th, “Independence Day”, will not be a day of wild casting off of economic shackles and letting rip with spending as some might like to suggest. Despite the exit Ireland will continue to be subject to significant post-programme surveillance, as well as the euro zone’s tough new “two-pack” rules [regulations allowing monitoring of indebted countries]. Tough love is for life.

“Goodbye bailout, hello credit", is how Cinco Días in Madrid welcomes the Eurogroup announcement. The economic daily notes that the money injected into Spanish banks since July 2012 will allow credit to flow to companies and the economy to rebound. Of the €100bn granted by the EU, the banks have used €41.5bn. However, recalls Cinco Días, when the rescue of the Spanish banks was announced

most Spaniards held their heads in their hands, suspecting that the rescue of the banks would leave them all with a hefty bill and would paralyse the economy for a lengthy period. But such a swift exit from the aid plan surpasses the most optimistic forecasts, with the banks recapitalised, and in an exercise that has been considered exemplary by its European partners. The rescue will not be considered exemplary, however, unless it can be confirmed that it has been used in an exemplary manner to revive credit following three years of contraction [of the economy].

"Portugal and Ireland are no longer in the same boat", headlines Jornal de Negócios, with Portugal not expected to exit the bailout programme until June 2014. The Portuguese government strategy has been to follow in Ireland’s footsteps, the newspaper adds. However, specialists quoted by Negócios agree that Portugal’s exit will have to feature some kind of precautionary credit line. In its editorial, Jornal de Negócios writes that,

Lisbon is betting on being able to negotiate a precautionary credit line, which will give the state extra protection while it is not able to use regular market support to finance itself in a sustainable way. It was anticipated that Ireland would be first to use this kind of untested solution, (…) however, Dublin pulled the rug from under [Portugal’s feet] and with good reason. In short, Portugal has just been left on its own. And the commitments and support that it will be able to count on will depend exclusively on the condition of the country when it reaches the end of the programme and the reputation for reliability that it has earned among its partners.

From Milan, Il Sole 24 Ore writes that "the Irish case must be music to the ears of Angela Merkel." The economic daily believes that the German Chancellor

sees in it a ‘success story’ capable of counteracting the accusation levelled against her for her approach to the problems of the south of Europe (starting with the Greece), which are a mixture of an inability to reform and recessions compounded by austerity. There remains the question of the banks which, precisely because of the exit from the rescue plan, should be put under special surveillance.