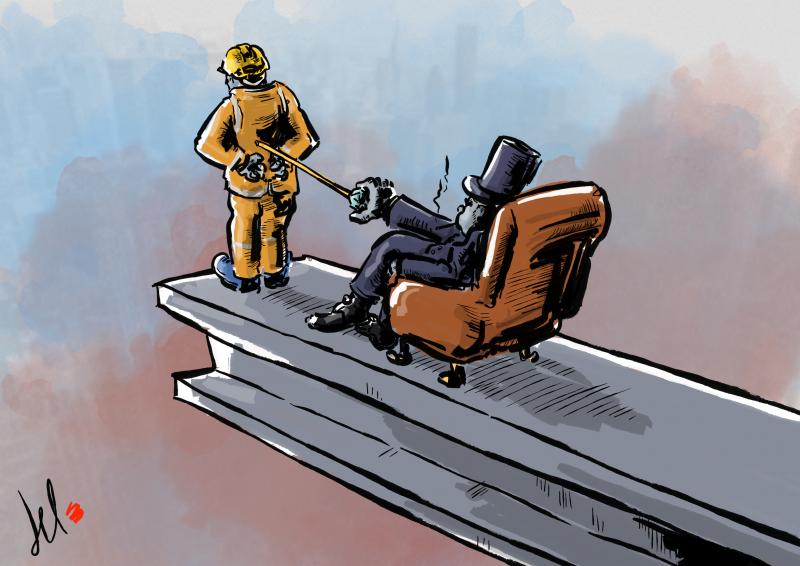 For a new post-pandemic economic constitution

The Covid-19 pandemic has provided an opportunity to reform labour rights and thus reduce inequality. Trade unions must have a louder voice in policymaking and business alike, argues expert Keith Ewing.

In the white heat of the pandemic there was much concern about our dependence on large groups of workers who hitherto had often been invisible and whose work had often been ignored:  health and social-care workers, cleaners, food producers, transport workers, as well as warehouse and shop workers.  It also brought to the fore the indispensable role of the State as governments raised and spent billions to bail out corporations albeit often for the benign purpose of protecting jobs. Arriving at a time when institutional and personal resilience had been diminished by a decade of austerity, Covid-19 has left shattered economies in its wake as well as shattered lives.

So what is to be done? In the panic of the early stages of the pandemic, there was much talk about a different future, with the need to reset the global economy, and an appeal to the steps taken in the 1940s forged during and implemented after another great global crisis. There was talk from the IMF about the need to rediscover the spirit that informed Sir William Beveridge’s famous report in 1942; from the European Commission about the need for a new Marshall Plan for Europe; and even from the British government of the need to follow the example of war-time leaders and their vision of ‘the postwar new Jerusalem that they wanted to build’.

Generally overlooked, however, is another great initiative of that era, namely the ILO Declaration of Philadelphia, with its famous Bill of Social Rights. One of the greatest legal texts of the 20th century, the Declaration of Philadelphia provides a blueprint for rebuilding social rights after the pandemic. At the heart of the Declaration is an important obligation of ILO members to implement ‘policies in regard to wages and earnings, hours and other conditions of work calculated to ensure a just share of the fruits of progress to all, and a minimum living wage to all employed and in need of such protection’. The latter is all the more important for the fact that it is a binding legal principle: it is not a slogan.

But what does it mean? This important principle has never been fully examined or the extent of its implications fully explored. While wages and working conditions will not alone determine ‘a just share of the fruits of progress’, they are clearly an important starting point.

And while the principle of a ‘just share of the fruits of progress’ is highly contestable and has been much neglected for the best part of 80 years, it can only be understood and developed by reference to an informed theory of social justice. This theory must be grounded in the context in which the principle appears and the values they reflect. The textual context is the Declaration of Philadelphia as a whole and the ideals by which it was inspired.

A ‘duty to promote’ collective bargaining

The starting point for the determination of a ‘just share’ is thus a ‘just process’ for the determination of wages.  As the Declaration of Philadelphia makes clear a ‘just process’ entails not only ‘the effective recognition of the right of collective bargaining’, but also ‘the cooperation of management and labour in the continuous improvement of productive efficiency, and the collaboration of workers and employers in the preparation and application of social and economic measures’.  In other words, the integration of workers in the development of economic policy, as well as its implementation in relation to wage determination at industry and enterprise level.

So far as collective bargaining is concerned, however, international law has failed to secure its ‘effective recognition’. The best we have so far is ILO Convention 98 which provides simply that ‘measures appropriate to national conditions’ should be taken ‘where necessary, to encourage and promote the full development and utilisation’ in the language of ILO Convention 98.  Although this may well have been ground-breaking at the time it was made, it is clear that something altogether more demanding is required to impose duties on States to establish collective bargaining machinery and to cradle its development. Gentle exhortations of what should be done are no longer enough: we now need stronger obligations.

The challenge is thus to refresh the ILO obligations in respect of collective bargaining, obligations which are repeated in the 1998, 2008 and 2019 Declarations. The Centenary Declaration is notable for the recognition that the ILO’s constitutional mandate requires the ILO to ‘direct its efforts’ to ‘promoting workers’ rights’ with a ‘focus on freedom of association and the effective recognition of the right to collective bargaining’. The key words here are ‘effective’ and ‘right’. These are commitments which current international instruments cannot realize, and which need a new generation of international law building on ILO Convention 98, but drafted in more prescriptive and less apologetic terms.

A new idea of ‘equal value’

Yet while a ‘just process’ is essential, so too are ‘just outcomes’. As now widely recognized, collective bargaining is important for its effect in reducing inequality.  But it does so in a potentially arbitrary way, without necessarily recognizing the relative value of different jobs and the contribution made by different workers. As a result, collective bargaining cannot be left to the parties without further guidance from the State if its role in securing a just share is to be realized. Among the other requirements is a principle of equality for those doing work of equal value, a principle that would extend beyond the current role of this principle in addressing gender pay differences.

The wider embrace of equal pay for work of equal value would require all jobs properly to be evaluated taking into account the lessons of the pandemic, that the most socially valuable work is among the most poorly paid. We must develop procedures to assess the social as well as the economic value of jobs and rewarding them accordingly, acknowledging the contribution of every worker from the cloakroom to the boardroom.

But beyond equal reward for equal worth, we must also address the differentials between those whose work is assessed as being of greater value than others.  Higher value justifies at best a proportionately higher wage.  But it does not justify the pay or income differentials that we see today.

Which brings us to a brilliant article by Dr Ioannis Katsaroumpas who makes the case for a ‘right against extreme wage inequality’, but which is in effect a right to ‘fair pay ratios or differentials’.  Emphatically located in the Declaration of Philadelphia, this would impose a duty on collective bargaining institutions to set compulsory ratios so that the highest wage or salary earner in any enterprise or sector is not paid more than say eight times the lowest wage or salary earner. Although devised principally as a way of containing high executive pay, by compressing differentials such a scheme has much greater potential and would reinforce initiatives designed to ensure pay equity all the way through the pay scale.

It is thus difficult to exaggerate the radical and transformative potential of legal principle requiring ‘a just share of the fruits of progress’. Self-evidently will not be met by a minimum wage of the ‘adequate’ or even ‘minimum living’ variety, as proposed in different ILO instruments. To guarantee everyone a just share is to require a different kind of State – one which is required to grow to redistribute in the interests of its citizens, and one which is prepared to transform democratic structures to give trade unions a voice in the development of economic policy, as well as in the management of industrial branches and enterprises.  Such a change of direction would also enable us to give effect to the other great ILO legal principle now conspicuously honoured in the breach: labour is not a commodity.

One of the consequences of the foregoing is that it would tend to increase the pay of those undertaking work currently ranked of lesser value, and thereby make a minimum wage either unnecessary or to be pulled to a much higher level than is currently usual in developed economies. Consistently with the Declaration of Philadelphia, the minimum wage determined by the State would cease being a major policy lever, and would inevitably be something quite exceptional for those ‘in need of such protection’. The need should only arise where there are gaps in collective bargaining coverage, and would signal a failure of the duty to promote collective bargaining.

This piece is linked to a wider project elaborated by the European Trade Union Institute, on reconstruction beyond the pandemic, which will culminate in an edited volume in early 2023.