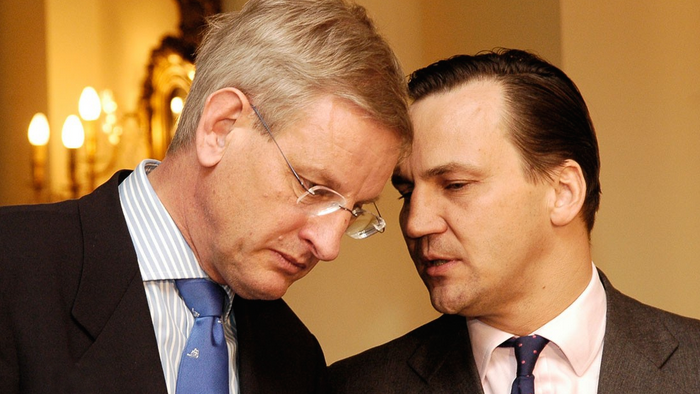 No future without the founding fathers

With the departure of the architects of the Eastern Partnership, Carl Bildt of Sweden and Radosław Sikorski of Poland, the European Union’s most important project is on the verge of collapse.

MSZ  | The “fathers” of the Eastern Partnership: Carl Bildt (left) and Radosław Sikorski.

On paper, the Eastern Partnership will survive for some time. Its next summit is already planned for Riga in Latvia in summer 2015. However, without the guidance of its founders, Carl Bildt and Radosław Sikorski — the first out of the picture following the defeat of the conservative government in Swedish legislative elections of 14 September, the second named to the presidency of Poland’s national assembly — it is highly probably that the Eastern Partnership will begin a chaotic drift. It is no secret the European Union is full of meaningless institutions, worthless projects and thousands of mediocre officials.

It was after the Russian-Georgian war of August 2008, which took the West by surprise, that Poland and Sweden, through Sikorski and Bildt, formulated a “soft power” response to Russia’s policy of consolidating its influence in the former Soviet space. It carried the name of the Eastern Partnership and was officially launched at a summit in Prague in May 2009.

The Westernisation of the East

The Partnership saved six former Soviet republics from abandonment, including three in Eastern Europe (Belarus, Ukraine and Moldova) and three in the Caucasus (Georgia, Armenia and Azerbaijan). It came at the right time, offering a chance to their populations and maintaining a desire to move closer to the West and to limit Russian influence. It was a lifeline for the political opposition and civil society groups of a new generation to resist the autocratic excesses of Minsk, Yerevan and Baku.

The Partnership has been instrumental in the Westernisation of the East, for which it represents the values of the civilised world, facilitating their transition from strong authoritarian traditions. It represents an independent judiciary, civilian control of the military and independent media. Bildt and Sikorski have navigated the Partnership through the seas of Brussels bureaucracy, mobilised governments, visited the Eastern European capitals and laid on pressure when the gap between public statements and political realities became too wide. But now, only half of the six countries remain: Moldova, Georgia and Ukraine.

The Partnership was not a free ride into the European Union, as some wanted to believe. It did not force its members to make a choice between East and West, between Russia and the EU. At least until the spring of 2012, when Vladimir Putin returned to the Kremlin, winning a third term as president. His Eurasian Union, which will come into effect in January 2015, gave the Eastern Partnership a dramatic side it did not have before. It is pressure from Moscow that forced the former Soviet republics to choose between Russia and the European Union.

The buildup of tension exploded in Ukraine in November 2013, when Kiev refused to sign the EU association agreement at the last Eastern Partnership summit in Vilnius, under pressure from Moscow. War broke out in Ukraine because Russia perceived a threat to its geopolitical ambitions.

Without Bildt and Sikorski, but with the Social Democratic Federica Mogherini directing EU foreign policy, I fear we are facing the onset of very difficult times for the West’s policy towards the East.