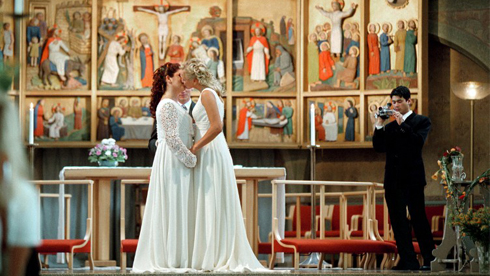 No hitch in gay marriage debate

In a Europe where “marriage for all” has opened up a bitter divide in France, and at time when the Polish parliament has recently rejected civil union legislation, Sweden stands out as a country where lesbian bishops can legally get married without sparking controversy.

On the big day, the bells in the village church in Dalby in southern Sweden seem to be ringing out for them alone. Anna and Christina Roeser first met in 2005. A few months later, they moved in together before announcing their engagement. Anna, who works in a childcare centre, and Christina who is a theology student, dreamed of founding a family. To have the right to participate in an assisted procreation programme, they needed to register their “partnership”. They had wanted a big church wedding, but resigned themselves to tying the knot at a civil ceremony.

The wedding took place in the courthouse in 2007: “We were received by the judge while he was on a break from a corruption hearing,” says Anna. At the time, the Evangelical Lutheran Church, to which 70 per cent of Swedes belong, was considering the possibility of allowing homosexual couples to marry. “We knew it was going to happen, but we didn’t know when,” explains Christina. Instead of requesting a religious blessing for their partnership, they decided to wait until they could get married. On April 1, 2009, the Swedish parliament adopted a “gender-neutral” law on marriage. Six months later, the Lutheran Church of Sweden, which had ceased to be the state Church in the year 2000, did likewise, thus becoming the first majority Church in the world to marry couples of the same sex.

For Sweden’s Christian homosexuals, who had fought for the change for 30 years, it was a monumental victory. For the two women, it was a logical decision. Neither of them had ever had to defend their sexual orientation to family or colleagues. In October, they became mothers to two daughters, Théia and Esther, who have recently been baptised. Anna, 37, is the biological parent. “No one feels this is bizarre in Sweden,” they say. No more than their church wedding, which was celebrated in August 2010. “For me, it was very important to have our love blessed by God,” explains Christina, 28, who was ordained a priest a year ago.

However, the decision to marry homosexual couples was not well received by everyone in Sweden. Several bishops would have preferred that the Lutheran Church give up its right to celebrate marriages, rather than take up a position on the law voted by parliament. The members of the synod, composed of 250 elected parish representatives, rejected this solution, and the vote for “marriage for all” was passed with a 70 per cent majority on October 22, 2009.

Since then, the impassioned argument inspired by the issue has calmed down, says Archbishop Anders Wejryd, who presides over Uppsala, a city close to Stockholm, in the heartland of the Swedish Lutheran Church. It was nowhere near as divisive as the debate over the 1958 decision to ordain women priests. Some diehards decided to break with the Church, but they were a minority.

Nor was their a rush to take advantage of the new dispensation: between 2010 and 2011, only 350 homosexual couples were married by the Church, as opposed to close to 40,000 hetorsexual couples.

In July 2009, two Anglican bishops addressed a warning letter to the Archbishop of Sweden, pointing out that the Swedish Church’s decision could “undermine the fragile unity of the Anglican Communion”. The Russian Orthodox Church had already broken off relations in 2005, in response to the blessing of civil partnerships. In Sweden at the time, more than 800 priests signed a petition deploring a decision that they judged to be “in conflict with the order of life for couples and the nature of marriage that God has revealed through his word, which is defined as a relationship between a man and a woman.”

In 1985, the bishops of Sweden recommended that Christian homosexuals should practice abstinence. It took three further inquiries and dozens of reports before things started to move. Resistance had been building. In the summer of 1980 in Stockholm, at a mass that he had organised in his church to celebrate the end of gay pride, the priest Ludvig Jönsson proclaimed, “Wherever love appears, a miracle takes place,” a rallying call that is still repeated today.

Eva Brunne, 58, is eager to pay homage to him and his predecessors. In 2009, news that she had been elected Bishop of Stockholm was reported around the world, partly due to the fact she is a lesbian. She insists that her sexual orientation and the fact that she was raising a child with another woman were never discussed when she was nominated. Is the Church of Sweden ahead of its time? “I think that as a reformed church, we are used to evolving to keep pace with the transformation of society,” she says.

‘The Pope is wrong’

In Uppsala, another lesbian priest agrees. For the Evangelical Lutheran Church, explains Anna-Karin Hammar, 61, “experience carries as much weight as tradition.” She is convinced that “if Saint Paul were alive today, and if he knew what we know, he would be in favour of same-sex marriage.” Born into a family of four generations of priests, in 2006, Ms Hammar caused a sensation when she presented herself as a candidate to succeed her brother, the archbishop, K G Hammar. It had to be done: “No other woman was willing to stand.”

A much noted pioneer, in 2001 she and her partner, Ninna Edgardh, a 57-year-old theologian who is the mother of their two children, invited 70 close friends and family to a to a blessing of their partnership celebrated by a bishop friend in Uppsala Cathedral — four years before the Church gave its official authorisation for this type of ceremony.

For French Catholic homosexuals, the President of EKHO, the ecumenical group for lesbian, gay, bisexual and transgender people, Gunnar Beckström, has a few words of advice garnered from years of lobbying: “They should stand up and say they do not want to be oppressed anymore.” Because the Pope is wrong: “He should start reading scripture correctly and take an interest in recent studies of the Bible.” They have to hammer home the point: “Homosexuality is not an illness. The oppression of homosexuals is not the will of God.”