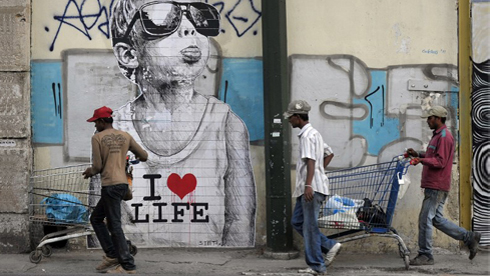 ‘No way to earn our bread here’

Victims of the crisis and its consequences, non-European migrants have started to head home. In a centre in Athens, they talk bitterly of the setback that repatriation represents for them.

“We will only look back on the good things in your country. We will remember the Greeks who helped us and who didn’t see us as enemies, but we are leaving because there is no longer any way to earn our bread here.”

The immigrants, who had come to the International Organisation for Migration (IOM) mission in the southern suburbs of Athens to apply for voluntary repatriation, were responding to our request for a brief evaluation of their experience in Greece. Most of them told us that when they arrived in the country years earlier, they were torn between feelings of fear and hope. Now the prospect of a return to earlier chapters of their lives inspires only fear.

Nurul Astoutik, 23, looks helpless when she tells us she will be leaving Greece for Iraq. For the last three years, the young Indonesian woman has lived in our country, where she works as a household help. Her fiancé, Yahya Awantin, 33, is from Iraq. He arrived in “the wonderland of Greece” in 2004 and found work in construction. For years, everything was fine. Then came the day when salaries began to fall and his request for asylum was rejected.

Yahya and Nurul, who are both Muslims, were married a few months ago in one of the improvised mosques that have opened up in Athens. Their union, which is official in the eyes of God and the Muslim community, is not recognised by Greek state documents. “We cannot stay here because there is no work, and we cannot even obtain papers to get married normally,” explains Yahya. “No, I did not want to leave Greece, but I don’t have the choice. We will go to Iraq and see what happens.”

Every day dozens of immigrants wait for repatriation documents at the IOM, and each of them has a story to tell. “The Greeks are nice and hospitable. But the economic situation in the country is not good, and in this kind of situation, people become harder,” says David Abbas: a 26-year-old who paid €4,000 to “smugglers who brought him to Greece” from Pakistan.

“I have a diploma in company management and a lot of experience repairing computers” he says in English. In Greece, however, he mainly worked for farmers: “I have been living in Skala, in the Peloponnese region, and I’ve come to Athens to file papers for me to go home. There is no work, and I don’t know what else to do,” he explains, before being interrupted by a countryman who asks for help in communicating with the IOM staff. “He is trying to go back too, but he doesn’t speak English or Greek,” says David. Then he adds, “I will never forget Greece, in spite of the difficulties and the injustices I’ve experienced… A few months ago, I was attacked near Victoria Square in Athens. My father is begging me to go home all the time. He is quite old. He could die, and I’m afraid that I won’t be in time to see him.”

Sar Ibrahim, 24, is from Senegal, a country that most Greeks would not be able to find on a map. He tells us that in the five years that he stayed in Greece, he had no opportunity to make friends. “The only Greeks I met were farmers who gave me work. And I didn’t have much communication even with them,” he says. “I worked in the olive groves. Today I have no more money, because I spent everything that I saved when I had no more work. Today I am worried for myself, for my future, and for my family. But I am leaving Greece.”

Since the end of 2010, the IOM has received 14,000 applications from immigrants in Greece who want to return to their home countries. Everyday, dozens of people join the queues at its offices, which have recently been growing longer.

According to the authorities, the reasons why people want to be repatriated are mainly to do with rising unemployment, the impossibility of obtaining residency permits (which prevents them from travelling to other countries), and the attacks which have targeted immigrants.

In 2012 a total of 6,324 people — most of whom were from Afghanistan, Pakistan, Bangladesh and Iraq, — left Greece with the IOM program, and a further 800 were repatriated by a scheme funded by Norway. Among them, about 360 took part in resettlement programmes that included special assistance for opening businesses, or training, which were provided as an incentive to help them stay in their country.

Immigrants strike out for Northern Europe

In Italy as well, thousands of immigrants who have lost their jobs because of the economic crisis are leaving the country. Some are going home, but most, who want to stay in Europe, are heading north, writes La Repubblica, reporting from Treviso in the north-east. “Workers and entrepreneurs who took out loans to pay for their housing had a specific project,” the newspaper writes,

The project was to stay in Italy for good and go back to Morocco and Bangladesh only for the holidays. To visit family and show everyone that their business has been successful. […] ‘Many people who have lost their jobs in factories or shut down their SMEs, are returning home before they spend all of their life savings or are seeking a future abroad,’ explains a Moroccan cultural mediator. ‘In France, Germany, the Netherlands and Belgium, there is still a strong welfare system. There is a lot of help given in finding housing and employment. According to a charity worker, ‘the worst off are the children and young people who have to leave school to go back to their parents’ country, which they have never seen.’