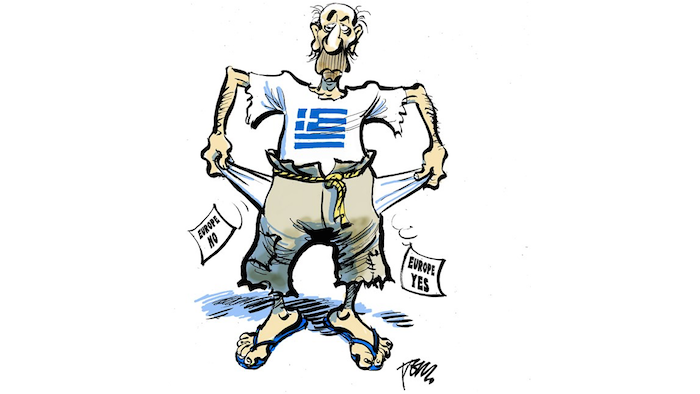 This weekend's referendum gives Greek voters a choice between two radically different futures, Joseph Stiglitz writes in Project Syndicate. Approval of the IMF-ECB-EU troika's terms will mean "depression almost without end" for the country, while a rejection leaves open the possibility of a "far more hopeful" outcome, even if Greece never regains its former prosperity.

Stiglitz notes that, when it comes to reducing a primary deficit, "few countries have achieved anything like what the Greeks have achieved in the last five years." But this has come at an unacceptably high human cost: austerity measures have so far been responsible for a 25% drop in Greece's GDP and a youth unemployment rate of 60%. That the troika is demanding further cuts is a sign that ideological motivations have trumped financial considerations.

The troika's demands on Greece, Stiglitz claims, are founded on "abysmal" economics. It wants a primary budget surplus (excluding interest payments) of 3.5% of GDP by 2018. "Economists around the world have condemned that target as punitive," he writes, "because aiming for it will inevitably result in a deeper downturn." The troika's current position has more to do with ideology than money: Greece must be forced into accepting not simply austerity, but punishment.

Stiglitz, a Nobel laureate in economics, calls attention to the real beneficiaries of the series of bail-outs so far issued to Greece —

We should be clear: almost none of the huge amount of money loaned to Greece has actually gone there. It has gone to pay out private-sector creditors – including German and French banks. Greece has gotten but a pittance, but it has paid a high price to preserve these countries’ banking systems. The IMF and the other “official” creditors do not need the money that is being demanded. Under a business-as-usual scenario, the money received would most likely just be lent out again to Greece.

But it is for the eurozone that Stiglitz reserves particularly strong criticism. He argues that representatives of the eurozone are attempting to force a democratically elected government to go against the wishes of its voters. The eurozone, for Stiglitz the "antithesis of democracy", believes it can bring down Syriza "by bullying it into accepting an agreement that contravenes its mandate." Given the severity of these bail-out conditions, there is, for Stiglitz, only one viable option: Greeks should put democracy first by rejecting the troika's terms. While the outcome is far from certain, a no vote would allow Greece, "with its strong democratic tradition, [to] grasp its destiny in its own hands."