Analysis Pact on Migration and Asylum | 2 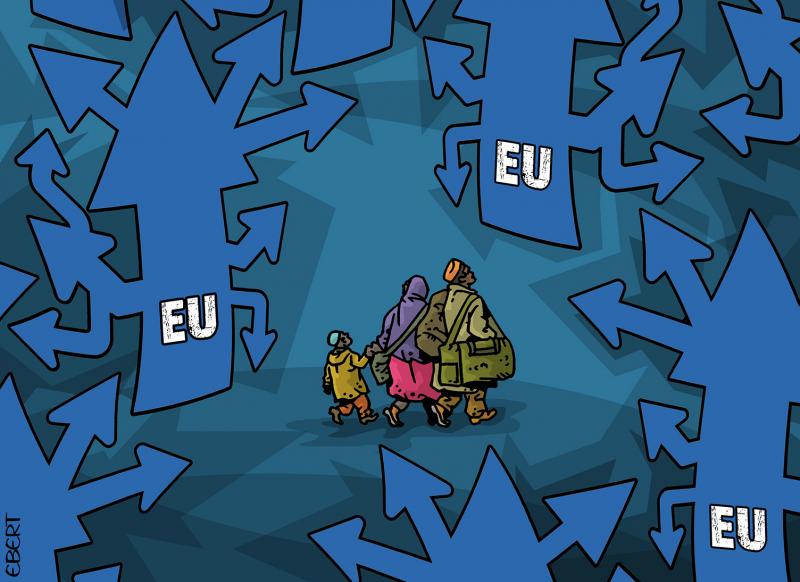 Analysis Pact on Migration and Asylum | 2

Undocumented migrants’ associations ask for ‘the minimum: rights and opportunities for all’

Undocumented migrants' associations reject the dichotomy between "good" and "bad" migrants advocated by the European Commission and EU member states, and claim the right to reside legally in the European Union. This is the second article in our series on the possible effects of the recent European Pact on Migration and Asylum.

On 17 October 2020 tens of thousands of people marched through the streets of Paris to demand "equality, simply equality". Equality for those women, men and children who, in European jargon, are called "illegally-staying third-country nationals", but who, in their open letter to French President Emmanuel Macron, signed themselves "the participants of Act 3 of the Sans-Papiers". Macron refused to receive them: this would have meant acknowledging their existence.

In France, as elsewhere in the European Union, undocumented migrants are seen as a number to be reduced (there are between 4 and 5 million of them across the EU), and as "irregular migrants" waiting to be expelled. Even if they have been living here for years or if they were born in a European country. If these people "have no right to stay" – this is the leitmotiv of the European Commission – then every effort must be made to remove them.

The Pact on Migration and Asylum, presented on 23 September, stiffens this attitude. Although the focus is on people arriving at the EU's external borders, it contains several elements that are of concern to the Platform for International Cooperation on Undocumented Migrants (PICUM). In a statement, this network of organisations criticises the proposal to extend the "compulsory screening" procedure to people already present on EU territory if "there is no evidence that they have crossed an external border with authorisation", which would lead to an increase in checks on "persons and communities already confronted with discriminatory police practices".

Another worrying element is the “fiction of non-entry”, a concept that originated in Germany and has found its way – thanks to lobbying from Berlin – into an EU text. The Pact specifies that during screening procedures and applications for international protection at the border, persons “shall not be allowed to enter the territory of a Member State”. For days, weeks, even months or years, a person can be physically on EU territory without having arrived "legally". Recalling the history of this concept, originally applied to airport transit zones, researcher Kelly Soderstrom points out that decoupling physical from legal arrival makes borders extremely flexible. Similarly, other researchers note that hotspots have led to the "crucial severing of the link between territory and rights".

Approved by the Coordination of Undocumented Migrants in Belgium, it led to the election of Abdul-Azim and another activist, Mamadou Diallo, who participated in the European Forums on Migration in 2018 and 2019. Still in its infancy, the initiative reminds us that undocumented migrants are "political subjects in their own right", and that they "should have access to regularisation because they are already resident in Europe and participate in the economic, social and cultural life of European countries".

This reasoning runs counter to the logic of the Commission and EU member states, for whom only "real refugees" are entitled to a European right of residence, while for "false refugees" and "economic migrants" the only way out is expulsion. Rejecting this distinction, the Coordination of Undocumented Migrants in Belgium has recently reiterated its demand for regularisation, which is all the more urgent in these times of health crisis. This demand is shared by all undocumented migrants' movements in Europe, united within networks such as the International Coalition of Undocumented Migrants (which in April 2020 sent a letter on this subject to the European institutions), the Transnational Migrants Coordination (initiator of the international mobilisation day on 17 October 2020) and the campaign Papers for All.

But it is above all at the local level that both the struggle and the changes happen. Local authorities have a role to play, underlines Michele LeVoy, director of PICUM: "Several cities in Europe, at odds with national policies, provide undocumented migrants with access to certain services or support organisations that offer these services". Mariema Faye, a member of the Movimento Migranti e Rifugiati Napoli (MMRN), which is very active in Naples, is also convinced that "change comes from the bottom up, because that is where you see the impact of laws on people's lives".

Launched in 2016 and linked to the political movement Potere al Popolo, the MMRN brings together Italian activists such as Mariema and undocumented migrants. One of its latest targets has been the "sanatoria truffa", the "scam" regularisation campaign launched by the Italian government in May 2020, which has "proved ineffective, fuelled divisions among migrant workers and led to trafficking in false employment contracts", Mariema says. "The state has an interest in keeping these workers invisible: it can exploit them and does not owe them anything."

"Undocumented activist movements can change the debate, especially regarding fair working conditions," says LeVoy, citing the example of the undocumented farm workers' movement in Florida. On this side of the Atlantic, the reform of the EU’s Common Agricultural Policy could improve the working conditions of undocumented farm workers if European subsidies were finally made conditional on respect for labour law. "But workers still need to be able to file complaints without their data being passed on to the immigration services," notes LeVoy.

"Our positions are not radical. We are asking for the minimum: rights and opportunities for all," says Mariema. The day this becomes the minimum, undocumented migrants will have won their struggle.