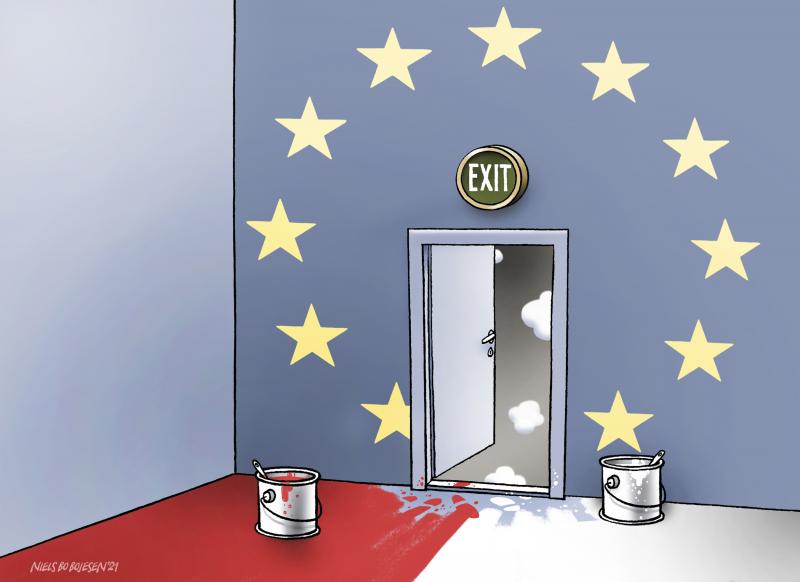 "Always criticize the European Union; never leave it.” Is this Warsaw's EU motto? Poles want to be seen as a great European nation. Unlike the British, they are not seeking an exceptional status.

Poland is not the UK. Several members of the nationalist conservative government were certainly tempted to raise the spectre of Poland leaving the European Union, in the wake of the decision by the highly politicised Polish constitutional court to challenge the primacy of certain provisions of European law. However, Poland’s prime minister and foreign minister have both been clear: Poland has no intention of leaving the EU.

A few weeks earlier, when Dutch prime minister Mark Rutte had forcefully invited that other illiberal democracy, Hungary, to leave the Union if it disagreed with its rules, Prime Minister Victor Orbán had replied it was out of the question. Both the Polish and Hungarian leaders are very aware that outside the Union their two countries lose all negotiating power. They have adopted a nebulous and hypocritical line that could be summarised as "always criticise the Union, never leave it".

The reality is that Polish citizens, like Hungarian ones, are hugely attached to the EU: the European project’s approval rate is over 80% for the former. The reason for this is historical: for a long time, Poles felt that they were second-class Europeans, on the fringes of the old continent. It is EU membership that has given them the inestimable feeling of being Europeans like any others.

Beyond the support provided by European money, which has been a decisive factor in the country's strong growth over the past two decades, and the key role of the common agricultural policy in the modernisation of agriculture, this European pride is now a major component of Polish national identity. Poles want to be seen as a great nation within the Union, just like France and Germany. They do not seek, as the British do, to achieve some kind of Polish exceptionalism.

And if they have a strong attachment to the United States and NATO, it is for security reasons rather than identity ones. In this respect, Poland’s interest in Europe is existential, whereas the British were only looking to benefit from a market that would be favourable to their trade.  Finally, Poles have had a bad experience of Brexit: the large diaspora living in the UK feels it has been treated poorly by London, and accounts of the negative consequences of Brexit abound in the Polish press.

Poland’s interest in Europe is existential, whereas the British were only looking to benefit from a market that would be favourable to their trade.

The truth is that the illiberal line is becoming a minority in public opinion. PiS, the ruling party that has been able to unite a significant part of conservative Catholic opinion around moral issues, is very worried for its future. Its electoral base is shrinking, and the Polish church risks facing the same child-abuse scandals as the French and Irish ones. The discovery of these awful crimes at the turn of the 2010s transformed Ireland in less than five years from a conservative society to one of the most liberal in Europe.

The same dynamic is reportedly at work in Poland. A rapid transformation of Polish society could allow a pro-European government to come to power as early as 2023 and quickly restore the rule of law and the independence of the judiciary and the media. In the meantime, the EU’s institutions must do their utmost to ensure that Poland meets its European commitments.