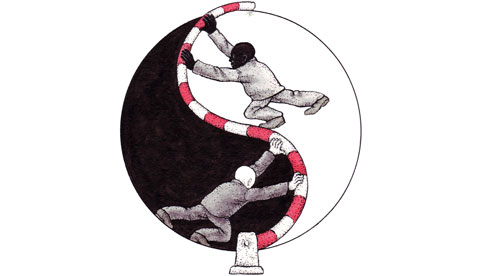 Racism is nesting in Europe

Whether it be in the form of taunts against French and Italian ministers, monkey cries directed at footballers, Islamophobia, or discrimination against the Roma, unabashed racism is increasingly common. Author Tahar Ben Jelloun warns against making any concessions on an issue that must be tackled by more education.

Racism is part of human nature. We should bear this in mind so that we can prevent it, and fight against it with laws. But that’s not enough. We must also dismantle its mechanisms and demonstrate the absurdity of its foundations by educating people, and remaining vigilant.

These days, French society is perceived as virulently racist, but on a fundamental level it is no more racist than others. The rejection of the foreign, that which is different, that which is considered to be a threat to our security, is a universal reflex that leaves no society untouched. Racism can in some cases focus on one community, but this does not mean that others will not also be affected by it. There is no discrimination in the exercise of hatred. Everyone has to endure it.

Today in Europe we are witnessing incidents that are serious, because racism which begins with words can also be implemented by crematoria. To refer to [French Minister of Justice] Christiane Taubira as an “ugly female ape” in a demonstration against gay marriage late in October is just the beginning. If left alone, it is a short step from insults to physical punishment, then to torture (the case of the young Ilan Halimi and to murder.

That’s why it’s wise to remember that there is no racism “lite”, nor is there a decaffeinated version. Mrs Taubira can regret that no political leaders spoke out against the racism to which she had been subjected. Another minister suffered the same treatment in Italy, where Minister of Integration Cecile Kyenge, originally from the Congo (Kinshasa), was insulted by high-level members of the Northern League, who are known for their racist views.

Black football players are also the target of entrenched racism. When a head of government sets out to obtain a cheap laugh by referring to “Obama’s tan", he is effectively encouraging those who would otherwise not dare to speak out to unburden themselves and give free rein to their rank ideas.

An easy attitude to adopt

The fact that Europe has gradually lost its prominence in the world, not only economically but culturally, promotes an acrimony that is likely to transform into a contempt of everything that is different. Spain has not yet cleaned up its relationship with Islam. Immigrants from the Maghreb are called "Mauros", a pejorative term that recalls the sad episode of the Inquisition.

The economic crisis has not improved matters. People are always suspicious of those who are poorer or more foreign than themselves. That is what makes racism an easy attitude to adopt in dealing with the hardships of life: a reflex that finds someone to blame. It used to be Jews; now it is Muslims.

While racism has always existed, there are plenty of politicians today who use it to serve their own interests. It is easier to spread hatred of foreigners than respect for difference. Humankind has a tendency to indulge its baser instincts, especially in situations where it is undermined by an inability to cope. [[Racism is mental laziness and a refusal to think]]. There will be always someone to think for you, and to make noxious software much easier to parse.

We are told today that not all members of the National Front are racist. Perhaps. But all racists are surely welcome within the party, provided that they are discreet about their beliefs. As long as the main concern of the politicians is to ensure their re-election, we will continue to see the most disgraceful degradations. Add to that the effectiveness of the new make-over of the National Front, to make it respectable and even banal.

The attempt to shake off the party’s label as “far right" is an interesting signal. If it were only a matter of words, one could admit that the extremist aspect has been replaced by something deeper and more dangerous: the trivialisation of prejudice and xenophobia.

Children must be taught

To combat the ideas of this party, there should be a systematic response every time one of its leaders proclaims false truths or proposes a programme that is not only unworkable but can be disastrous for our country. Besides this vigilance, which is sorely lacking in all the opposing political parties, there is a need to push on in schools with in-depth education over the long term.

[[Children must be taught, while their spirit is still reachable, what racism is based on]]; they should be taught its history, its devastation, its inhumanity. We must say and say again that fear and ignorance are the two sources that nourish this scourge, and that with knowledge and intelligence, through debate and by breaking down taboos, it is easy to take apart its mechanism. There is a need to tackle all subjects and not to turn a blind eye to the excesses of those who, reacting to the stigma they encounter, also become racist.

Asserting and proving that races do not exist will not of itself eliminate racism, obviously, but at least it is a truth that will shake some certainties.

Often, when the annoyances are at their worst, racist tendencies seem to be proliferating and racism to be on the increase; the reality, though, is that it has always been among us, lurking in the mind, ready to catch its breath when we sense a threat to our well-being and the arrogant need to feel alive – and above all, to think we are superior to others.