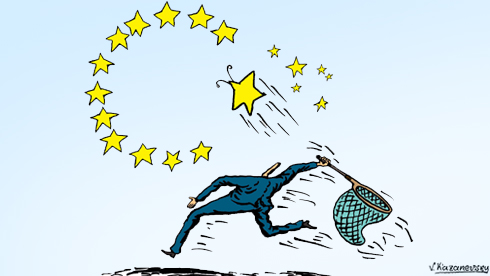 Big decisions affecting how EU member states function are taken by top ministers and heads of government, and handed down by the unelected “troika” of the European Commission, European Central Bank and International Monetary Fund. But national parliaments can help make European institutions more accountable.

The European Union has long suffered from a lack of legitimacy, but the euro crisis has worsened the problem. There is no silver bullet that can suddenly make the EU respected, admired or even popular among many Europeans. Its institutions are geographically distant, hard to understand and often deal with obscure technicalities.

Unless EU leaders can become more credible and legitimate in the eyes of voters, parts of the union could start to unravel. For example, at some point Eurozone governments may seek to strengthen their currency by taking major steps towards a more integrated system of economic policy-making. But then a national parliament, general election or referendum may block those steps and so threaten the euro's future.

Political institutions gain legitimacy from either “outputs” or “inputs”. The outputs are the benefits that institutions are seen to deliver. The inputs are the elections through which those exercising power are held to account. The euro crisis has weakened both sorts of legitimacy.

The outputs are hardly impressive. Economic growth is negative across much of Europe, unemployment in the Eurozone is above 12 per cent and youth unemployment in Spain and Greece is over 50 per cent. For many citizens, it is not evident that either the EU or the euro are delivering a great deal in terms of benefits.

You can unsubscribe anytime *
Categories
EUPolitics and democracyEuropean Union