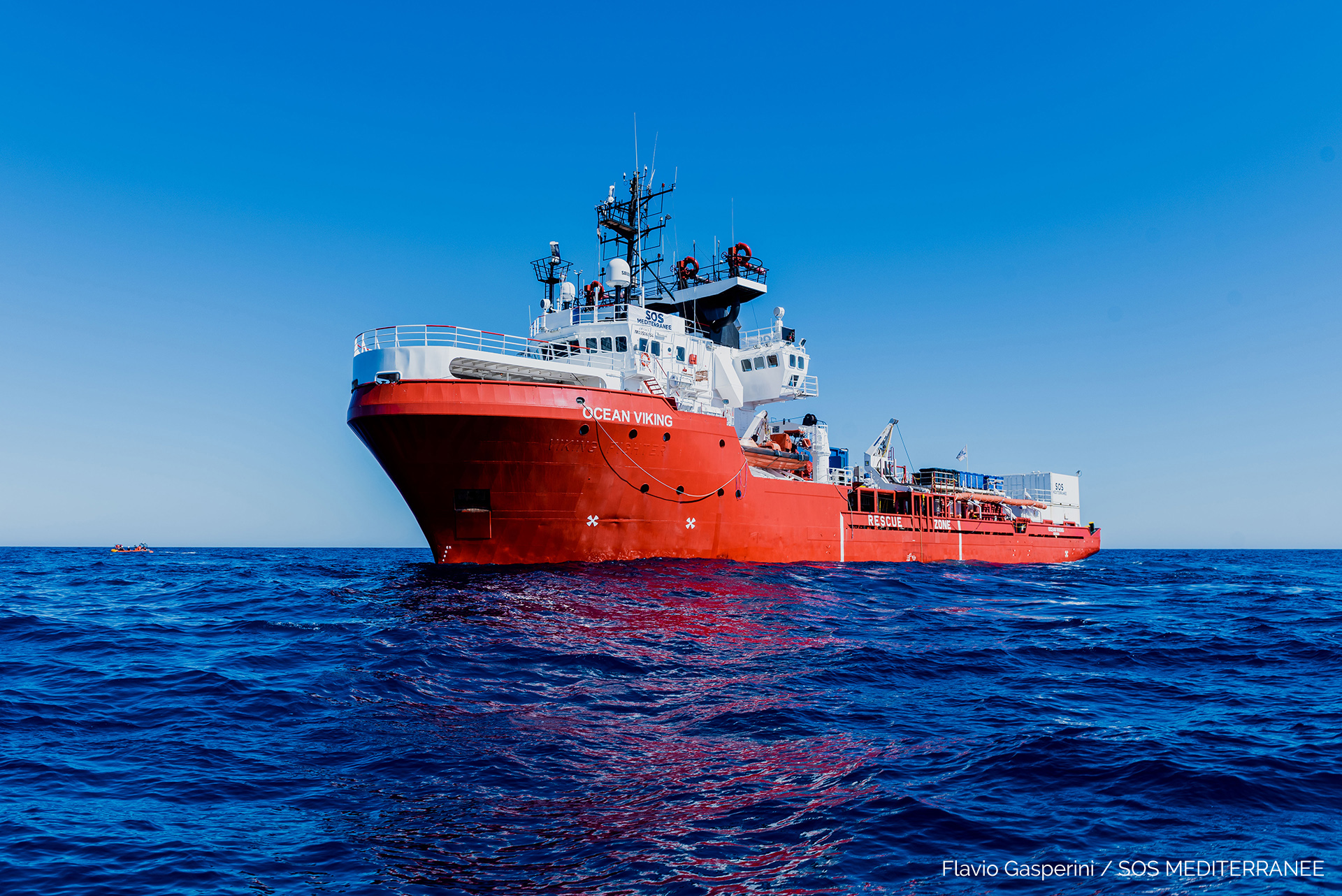 “180 survivors, rescued by SOS MEDITERRANEE crews, are currently awaiting a port of safety to disembark”, explains Sophie Beau, co-founder and general director of SOS MEDITERRANEE France. The situation on board the Ocean Viking rescue ship, which has been unable to dock for 9 days, is critical. On Friday, July 3rd, the ship declared a state of emergency as the safety of its crew and 180 survivors can no longer be guaranteed.

The humanitarian crisis in the Mediterranean never slowed down, even when faced with the Covid-19 pandemic which sent three quarters of humanity into confinement in order to save lives. Men, women, and children continued to flee what they frequently call the “Libyan hell” in makeshift boats. In Libya, criminal networks reign, using torture, extortion, slavery, and the most barbaric brutalities against thousands of migrants with nowhere else to turn.

For three months during the pandemic, humanitarian vessels such as the Ocean Viking remained docked. However, if we still needed to demonstrate that the push-pull theory of migration does not hold up, crossings continued at an even higher rate than last year. With a count of 373 victims so far in 2020, the Mediterranean remains the world’s deadliest migratory route.

The Ocean Viking left Marseille on June 22nd with a new crew of sailor-rescuers and medical personnel. Strict measures were put in place in order to avoid a potential spread of the epidemic: preventative quarantines for the crew before boarding, mandatory protective equipment, decontamination chambers, differentiated zones on ship… Protocols which are very burdensome and restrictive for the rescuers during operations at sea and with reduced space on the ship.

When the Ocean Viking arrived off the coast of Lampedusa, alerts followed by rescues of small crafts in distress came one after the other beginning June 25th. Dehydrated and exhausted, some among the shipwrecked had been drifting at open sea for five days before being rescued.

180 Survivors Await Port of Safety while European Solidarity Breaks Down

For nine days, the Ocean Viking has been unable to dock. The 180 survivors rescued by SOS MEDITERRANEE crews during four operations are awaiting a port of safety to disembark which, according to international law, should take place without delay. Of the four rescues, three took place in Malta’s search and rescue zone, and the fourth in the Italian-Maltese common zone. Despite seven requests addressed to maritime authorities responsible for designating a port of safety, a positive response has yet to come to us, nor any sign of European solidarity. The European coordination mechanism signed in September at La Valette for the resettlement of Mediterranean survivors is at a standstill.

A Situation Both Untenable and Unacceptable

For a week the Ocean Viking has been floating at open sea, the wait dragging on and despair overtaking the survivors. These are people who are traumatized, exhausted, and on the verge of breakdown. Medical evacuation has been requested for 44 individuals in acute psychological distress. On Friday, a man attempted to hang himself. The night before, two desperate people threw themselves into the water. They were rescued by our crew, but tensions on board are rising. In total, six people have tried to take their own lives. The situation is untenable.

Where is Europe in all this? Must we wait for a death on board for ports to finally open? Where are the lessons learned from the pandemic? At sea as well as on land, did we not learn that every life counts and is of equal value?

Europe must respect the law and assume its responsibilities. Today as with 5 years ago, faced with the failures of individual states, we are making an urgent appeal to citizens to relay our cry for help and to help us in carrying out our mission.

SOS MEDITERRANEE is more than 90% financed by private donations.

To help the association carry out its mission, donate at www.sosmediteranee.fr/.org