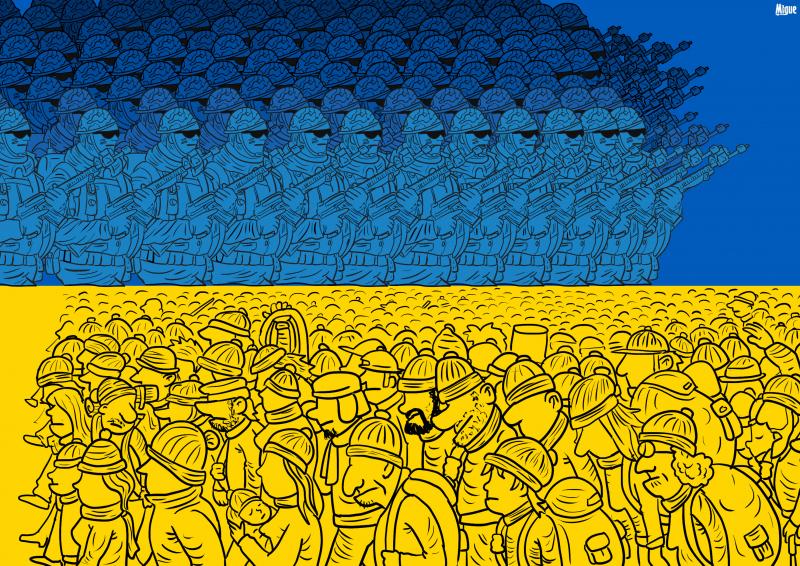 Timothy Garton Ash: The war on Ukraine will change the face of Europe forever

On 24 February Russia invaded Ukraine, and the immediate future looks pretty grim. But here's what we in the West can do to help the Ukrainians – and ourselves.

Why do we always make the same mistake? Oh, that's only trouble in the Balkans, we say – and then an assassination in Sarajevo sparks the First World War. Oh, Adolf Hitler's threat to Czechoslovakia is 'a quarrel in a faraway country, between people of whom we know nothing' – and then we find ourselves in the Second World War.

Oh, Joseph Stalin's rape of distant Poland after 1945 is none of our business – and soon enough we have the Cold War. Now we have done it again, not waking up until it is too late to the full implications of Vladimir Putin's seizure of Crimea in 2014. And so, on Thursday 24 February 2022, a date that will go straight into the history books, we stand here again, clothed in nothing but the shreds of our lost illusions.

If ukranians don't resist, at scale, this will be an occupation. If they do, this could be the largest war in Europe since 1945

In such moments we need courage and resolution, but also wisdom. That includes care in our use of words. This is not the Third World War. It is, however, already something much more serious than the Soviet invasions of Hungary in 1956 and Czechoslovakia in 1968. The five wars in former Yugoslavia in the 1990s were terrible, but the larger international dangers that flowed from them were not on this scale. There were brave resistance fighters in Budapest in 1956, but in Ukraine today we have an entire independent, sovereign state with a large army and a people who declare themselves determined to resist. It is now clear that the Ukrainians are resisting in every way they can. Their army is fighting fiercely, and ordinary Ukrainians are lining up to serve in territorial forces and militias. This is already the largest war in Europe since 1945.

Against them is arrayed the overwhelming force of one of the strongest military powers in the world, with well-trained and equipped conventional forces, and some 6000 nuclear weapons. Russia is now the world's largest rogue state. It is commanded by a president who, to judge from his hysterical rants this week, has departed the realm of rational calculation – as isolated dictators tend to do, sooner or later. To be clear: when, in his declaration of war on Thursday morning, he threatened anyone 'who tries to stand in our way' with 'consequences you have never encountered in your history', he was threatening us with nuclear war.

More : How we Ukrainians have learned to live with the spectre of a Russian invasion

There will be a time to reflect on all our past mistakes. If, starting in 2014, we had got serious about helping to build up Ukraine's capacity to defend itself, reduced European energy dependence on Russia, purged the sewage lakes of Russian dirty money swilling around London(grad) and imposed more sanctions on the Putin regime, we might be in a better place. But we have to start from where we are.

In the early fog of a war that is just beginning, I see four things we in Europe and the rest of the West need to do. First, we need to secure the defence of every inch of NATO territory, especially at its eastern frontiers with Russia, Belarus and Ukraine, against all possible forms of attack, including cyber and hybrid ones. For 70 years, the security of West European countries including Britain has ultimately depended on the credibility of the 'one for all and all for one' promise of Article 5 of the NATO treaty. Like it or not, the long-time security of London is now inextricably intertwined with that of the Estonian city of Narva, of Berlin with that of Bialystok in Poland, of Rome with that of Cluj-Napoca in Romania.

Second, we have to offer all the support that we can to the Ukrainians, short of breaching the threshold that would bring the West into a direct hot war with Russia. Those brave Ukrainians who have chosen to stay and resist are fighting, by military but also civilian means, to defend the freedom of their country, as they have every possible right in law and conscience to do, and as we would do for our own countries. Inevitably, the limited scope of our response will lead to bitter disappointment among them. Emails from Ukrainian friends speak, for example, of the West imposing a 'no-fly zone', denying Ukrainian airspace to Russian planes. NATO is not going to do that. Like the Czechs in 1938, like the Poles in 1945, like Hungarians in 1956, Ukrainians will say 'you, our fellow Europeans, have abandoned us'.

But there are still things we can do. Not only can we continue to supply weapons, communications and other equipment to those who are entirely legitimately resisting armed force with armed force. As important in the medium term, we can help those who will be using the well-tried techniques of civil resistance against a Russian occupation and any attempt to impose a puppet government. We must also stand ready to assist the many Ukrainians who will flee westward.

Russians will be the first and last victims of Vladimir Putin

Third, the sanctions we impose on Russia should go beyond what has already been prepared. Beside comprehensive economic measures, there should be expulsions of Russians in any way connected with the Putin regime. Putin, with his war chest of more than $600 billion, and his hand on the gas tap to Europe, has prepared for this, so sanctions will take time to have their full effect.

In the end, it will have to be the Russians themselves who turn round and say 'Enough. Not in Our Name.' Many of them, including the Nobel prizewinner Dmitry Muratov, already express their horror at this war. Do read the moving account by the Ukrainian activist Nataliya Gumenyuk of a Russian journalist crying on the telephone with her as the Russian tanks moved in. That horror will only increase when the corpses of young Russian men come back in body bags – and as the full economic and reputational impact becomes apparent at home in Russia. Russians will be the first and last victims of Vladimir Putin.

More : In Kyiv, preparing for the apocalypse

That brings me to a final, vital point: we must be prepared for a long struggle. It will take years, probably decades, for all the consequences of this 24 February 2022 to be played out. In the short term, the prospects for Ukraine are desperately bleak. But I think at this moment of the wonderful title of a book about the Hungarian revolution of 1956: 'Victory of a Defeat'. Almost everyone in the West has now woken up to the fact that Ukraine is a European country being attacked and dismembered by a dictator. Kyiv today is a city full of journalists from all over the world. This experience will shape their views of Ukraine forever. We had forgotten, in the years of our post-Cold War illusions, that this is how nations write themselves onto the mental map of Europe – in blood, sweat and tears.

This article has been updated on 27 February 2022.

👉 Read this article in the Guardian (and support it)