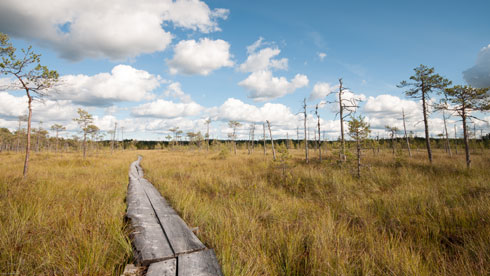 The 115-hectare enclave of Russian territory is a lure for tourists visiting the southeastern edge of the Baltic State. However, it will soon be returned to Estonia, much to the relief of local residents.

During the last 10 years, the “Saatse Boot” has become the principal tourist attraction in the municipality of Värska Parish. However, a border treaty, which is soon to be ratified by Moscow and Tallinn – the date has been postponed on several occasions – will put an end to the geographical curiosity that allows travellers to cross a part of Russia without a visa.

The road from Värska to Saatse, crosses the border more than once, but the passage through the “Boot” is more widely known, not least because a number of travellers have been arrested and taken to the nearest Russian border post in Pskov.

“Tourists like to pose for photographs in front of the Russian road signs, even though it is forbidden,” says Andres Oimar, who has worked as a border guard in the area since the 1990s. “Only last month, there was a British man who was preparing to photograph this sign. We managed to catch up with him just before he crossed the line of control [the border].”

Signs announcing “no stopping” and even “no pedestrians” are posted at the entry to the Russian area, which can only be crossed by travellers using a means of transport other than by foot, whether it be a car, a bicycle or even a donkey.

Liide Lusti, who lives in the Estonian village of Seniki, remembers being arrested and taken to the checkpoint in Krupa [Russia]. “I was there for 24 hours, before they took me back to Värska. But they didn’t make me pay a fine. [[There are a lot of wild mushrooms in the Boot, but if they catch you picking them, they take you in]],” says Lusti, who, like other locals, was tempted to enter the Boot once all of the chanterelles on the Estonian side of the border had been picked.

The Mayor of Värska, Raul Kuldre, also has a story about a trip in which he inadvertently ran into trouble in the curiosity that is the Boot. “When the border had only just been established, and the situation was still quite confused, I went on a run from Värska to Saatse,” says Kuldre. “And I succeeded in spending a night in jail in Krupa.”

In the years that followed the demarcation of the border, explains Oimar, the Russians were a lot more strict. “Today, people who are caught in the territory are often handed over to our border guards,” he says. Certain provocations, not to mention attempts to use the Boot as a route to smuggle Russian goods into Estonia, can, however, end up going badly for the would-be smugglers.

When the latest treaty comes into force, the Boot will become Estonian, in exchange for the handover by the Baltic State of an equivalent number of hectares (a total of 126) located elsewhere.

The area which makes up the Boot is a former farm, which, for some unknown reason during the Soviet era was attached to the village of Gorodische instead of the neighbouring Estonian villages of Sesniki or Lutepää. The former owner of the farm, who was forced to pass through Russian and Estonian checkpoints whenever he returned home, abandoned it more than a decade ago.

On the edge of the Boot, there are at least three wooden shelters where the Russian border guards sit waiting to see what will happen. They know that there are EU citizens who are unable to resist the temptation to stop their cars so that they can be photographed in Russia. The local border guards also claim that Murphys’ law applies in the Saatse Boot: if a car is going to break down, you can be sure it will happen in the enclave.

“There are a lot of breakdowns and even accidents,” explains Oimar. And there is a particular reason for this. [[Some young drivers know that Estonian law does not apply on the Russian section of road]] and neither our police or our border guards will enforce it. As for the Russian guards, they do not control speeding.

There are two further technical issues associated with the Boot: the first is a high voltage power line which crosses the territory; the second concerns the maintenance of the road. If the power line needs repair, Russia has to deliver a specific authorisation, and the work has to be supervised by Russian and Estonian border guards.

For the residents of Sesniki, the fact that the territory is to be handed over to Estonia is a major relief. Vello Kikamägi, who crosses the Boot every day, believes it will boost the morale in the local community: “Today I have to cross the territory of another country… And it has been that way for far too long. I am also hoping that they will tar the road. We really have had to put up with this situation for too long.”