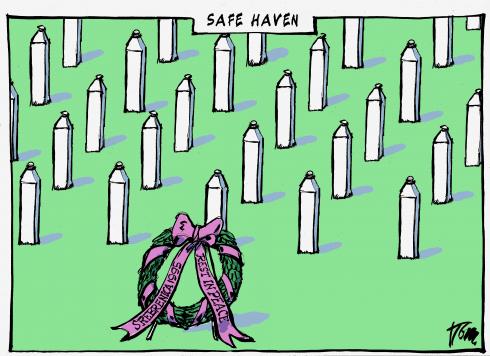 July 11 and 12 world leaders and former presidents gathered in Srebrenica (Bosnia Herzegovina) to commemorate 20th anniversary of the Srebrenica massacre. In 1995 Bosnian Serbs troops of gen. Ratko Mladic and Serbian soldiers took over the enclave killing over 8,000 Bosnian boys and men in five days. 400 Dutch 'blue helmets' could not prevent the biggest war crime in Europe since the end of WW II.

On July 9th Russia vetoed the Security Council resolution saying that the massacre in Srebrenica was a "genocide", even if it met the conditions stated in the definition and accepted by International Criminal Tribunal for the Former Yugoslavia.