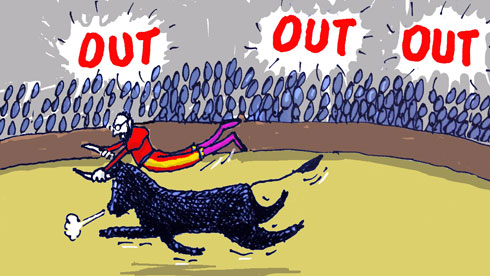 Señor Rajoy, it is time to give answers

Implicated in his party’s secret funding scandal, Spain’s prime minister has chosen to say as little as possible. Rajoy must cease his attempts to buy time and explain himself before Parliament, just as he would be expected to do in other European countries, argues El País.

Mariano Rajoy responded with a resounding “no” to opposition calls for him to resign. But he did not give it in his parliamentary headquarters, nor while offering any detailed explanation of the [former People’s Party (PP) treasurer Luiz] Bárcenas case; he gave it as an aside [on July 15] during a press conference with the Polish prime minister and through a statement prepared in advance. [Rajoy] knows very well that what we heard yesterday was not the explanation that is being demanded, and that he will not get off so easy before Parliament.

This happened on the same day the former head and treasurer of the PP confirmed his change of strategy before a judge. From originally denying the authorship of the accounting records published [by El País] on January 31, Bárcenas has not only moved on to acknowledging them, but is presenting them as evidence of an established system of bonuses and busy trail of slush fund money moving in and out of PP headquarters. He has struck [former prime minister] José María Aznar off the list of recipients and fingered Rajoy and [PP secretary general] María Dolores de Cospedal, giving the concrete amounts they received, although he also says he did not keep the corresponding messages. Indeed, he did come up with a document on the transfer of €200,000 in 2007 to the PP’s manager at the time in Toledo, allegedly in exchange for a cleaning contract, when Cospedal was president of the PP in Castilla – La Mancha. Cospedal denies the accusation and describes the Bárcenas’s other claims as a heap of “slander and lies”.

The court must pursue its investigation firmly, but the explanations that the citizens need do not end there. The unknowns are multiplying following Bárcenas’s declarations and highlight even more the degree of the former treasurer’s implication, as well as the grave suspicions about a system of revenues and irregular payments into the party. To argue there is no collusion with Bárcenas because he is in prison is not only simplistic; it is a dangerous argument in the mouths of political leaders, because it suggests that the executive branch can decide who goes to jail and who does not.

[[Rajoy is grasping for political stability]], implying only stability will see through his government’s reform agenda. By doing so, he seeks to throw the debate into the classical exchange between government and opposition. But he is avoiding doing so in Parliament, the natural meeting place of majorities and minorities and the seat of Spanish sovereignty. Rajoy is right to not discuss the matter in public, with the former treasurer or his entourage. But to make it acceptable for the Spanish people, he must answer to the parliamentary caucuses, as he would be required to do in the countries neighbouring Spain.

The problem continues to be posed in the same terms as before yesterday’s press conference, and the only temporary advantage that Rajoy can count on is the split in the opposition regarding the strategy to be followed. The head of the government is trying to dig in and win a few weeks or months of political life by putting off the problems until later. It is a useless attempt, considering the severity of the allegations and what they mean for citizens.

This “Blackmail” threatens a country in crisis

“Rajoy will not give in to the blackmail from Bárcenas and his accomplices,” headlines ABC. The conservative daily deplores what it considers a campaign to bring down the prime minister, orchestrated with the complicity of certain newspapers including rival conservative daily El Mundo.

For one thing, ABC reports that El Mundo director Pedro J. Ramírez met with Luis Barcenas and helped him find a new lawyer.

But above and beyond this polemic, remarks ABC columnist Ignacio Camacho —

… the problem for the nation is that the siege of Rajoy is undermining institutional stability at a critical moment. It is impossible to govern under such conditions. If the cabinet falls, the resulting earthquake will have geopolitical implications. At a time when Europe has been bled dry by structural weakness, Spain is the only country in the south of the Union whose government has the benefit of an absolute majority. The consequences of this upheaval, which could destroy the government, look to be disastrous.